LOS ANGELES — “Pinchas, how old are you?” Steven Spielberg asked the wall screen, a life-size video image of an elderly man in a cardigan, who blinked and answered without missing a beat.

“I was born in 1932, so you can make your own arithmetic,” responded Pinchas, in a Polish accent.

“He asked me to do the math!” Mr. Spielberg laughed. “How did you survive when so many did not?”

“How did I survive?” the screen responded. “I survived, I believe, because provenance watched over me.”

The chat went on for five minutes, and while the artificial intelligence looked eerily reminiscent of Mr. Spielberg’s earlier films, the goal wasn’t entertainment — it was education. On the sound-sensitive screen was an interactive biography of Pinchas Gutter, a Polish Holocaust survivor and part of a tour the director was leading through the redesigned headquarters for the U.S.C. Shoah Foundation, the organization he founded in 1994 to collect testimony from Holocaust survivors. Now Mr. Spielberg has expanded the foundation’s footprint on the University of Southern California campus, along with its mission and public focus: to fight hate, which he says has become commonplace globally.

“The presence of hate has become taken for granted,” Mr. Spielberg said. “We are not doing enough to counter it.”

The prerecorded video conversation is part of a series using playback technology that invites visitors to converse with 16 survivors of genocide, based on specific word patterns and more than 2,000 questions that vary from views on God to personal history. Earlier this month, the testimony of Pinchas was displayed at the United Nations on the 70th anniversary of the adoption of genocide laws, a storytelling tool to raise awareness.

While the foundation continues to archive stories from victims of anti-Semitism, and advocate on their behalf, it is also collecting what Mr. Spielberg calls “living testimony” from modern genocide victims. “The Holocaust cannot stand alone,” he said with conviction. “We decided to send our videographers into Rwanda to get testimony. From there we went to Cambodia, Armenia — we’re doing a critical study in the Central African Republic, Guatemala, the Nanjing massacre. Most recently, we’re doing testimony on the anti-Rohingya violence in Myanmar and the current anti-Semitic violence in Europe. We’re expanding our scope to counter many forms of hate.” 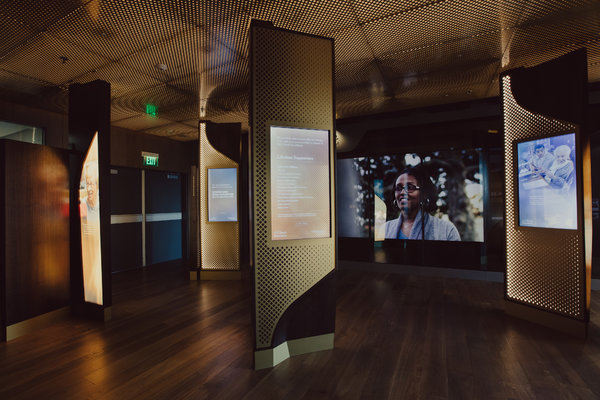 The 10,000-square-foot space — which opened to the public last month — is a far cry from the organization’s beginnings following “Schindler’s List,” in 1993. Mr. Spielberg sent an army of videographers around the globe to record Holocaust survivors’ stories. Betamax tapes of the interviews were stored at his Amblin Entertainment offices on the Universal Studios lot, and then at a storage company before the foundation’s move to U.S.C.’s Leavey Library in 2006. (There are a little over 51,000 recordings of Holocaust survivors in the visual history archive, a staggering 115,000 hours.)

Today the group has 82 employees and an annual budget of about $15 million, which includes $3 million from the university. It also has received millions in donations. Its new home — part office, part media lab — is packed with video testimonies from 65 countries in 43 languages, along with survivor-inspired artwork (a hanging steel sculpture by the British artist Nicola Anthony incorporates phrases from filmed testimony.) Visitors can tour the offices Monday through Friday, between 10 a.m. and 2 p.m.

“Everyone thinks the Shoah Foundation is about archiving the past but it’s about understanding empathy and using testimony to shine a light,” Stephen D. Smith, its executive director, said.

Reflecting its founder’s legacy, the organization has produced multiple films, including the recent documentary “The Girl and the Picture,” about 88-year-old Xia Shuqin, who witnessed the murder of her family in the Nanjing Massacre in 1937. It was directed by Vanessa Roth, whose mother was an interviewer for the foundation in the early 1990s. “The Last Goodbye,” a virtual reality memorial screening at Holocaust museums in Florida, New York, Illinois and California, takes audiences into the Majdanek concentration camp in German-occupied Poland, with Pinchas Gutter as guide, using thousands of photos and 3-D video to explore a railway car, gas chamber and barracks. David Korins, the scenic designer of the musical “Hamilton,” is now the foundation’s director of museum experiences, with the goal of getting the collection of archival footage into more museums.

Rising anti-Semitism is providing fresh impetus for the foundation’s relaunched efforts. “Not only are people willing to forget about the Holocaust, they’re willing to deny it,” said Aaron Breitbart, a senior researcher at the Simon Wiesenthal Center, the human rights organization that has worked with the foundation since the 1990s. “The Shoah Foundation has made a great contribution in that battle for memory.”

The relaunch coincides with the theatrical rerelease of “Schindler’s List.” In her 1993 review of the film for The Times, Janet Maslin wrote: “Rising brilliantly to the challenge of this material and displaying an electrifying creative intelligence, Mr. Spielberg has made sure that neither he nor the Holocaust will ever be thought of in the same way again.”

The film ran in about 1,000 theaters in mid-December and was screened free for students nationwide. Although it was digitally remastered in 4K resolution, Mr. Spielberg said, “I didn’t touch a frame.” The original version of the film is currently available on Netflix.

A quarter century on, it remains a complex depiction of Nazi horrors.

“We were surprised that somebody even attempted to make a film about it,” said Renee Firestone, 94, whose story is told at the foundation.

Despite the expansion, some challenges remain, Mr. Smith said. Most testimonies are unavailable online, which means they can only be seen at the foundation or the 146 partner libraries and universities (links are free for families of those interviewed). There are no transcripts of the recordings yet, but the foundation is spending $10 million building a free online platform for researchers, schools and the general public starting in late 2019, Mr. Smith said.

Days before Mr. Spielberg’s 72nd birthday, wearing a suede jacket and 1860s-style boots from his 2012 opus, “Lincoln,” the director munched a granola bar at the foundation’s headquarters. The color of his beard is now saltier, he has a few more inches around the middle, but his gray-green eyes still shine boyishly when he’s discussing his foundation and his seminal film. These are edited excerpts from that conversation.

Why expand the mission of the Shoah Foundation?

I think there’s a measurable uptick in anti-Semitism, and certainly an uptick in xenophobia. The racial divide is bigger than I would ever imagine it could be in this modern era. People are voicing hate more now because there’s so many more outlets that give voice to reasonable and unreasonable opinions and demands. People in the highest places are allowing others who would never express their hatred to publicly express it. And that’s been a big change. There’s all kinds of efforts to take the truth and subvert it to twisted ideology. We saw it happen in Europe first, in France, then Poland again — I never thought it would come back home to us like it has existed over the last two years.

Many groups are clamoring that they have it harder than others — how do we overcome that?

We can commiserate with each other about suffering and pain, but we should never compete that way. Being marginalized, being discriminated against, having racist and anti-Semitic slurs hurled is something that unites [all people]. Everything against black society is also against the Jewish community. Everything against the gay and lesbian, LGBTQ community is against black and Jewish communities. Hate is hate and the spillover makes us all responsible for watching each others’ backs and standing up for each other. None of us could ever be bystanders again.

How can Hollywood combat this?

Look how many movies are now telling the stories of women. There’s a huge shift that is gender-centric, and we saw it happen at the beginning of the Harvey Weinstein downfall. Storytelling is fundamentally human. But the art of listening is what I’m hoping the Shoah Foundation is able to inspire.

[In 2018, Amblin Television, a division of Amblin Partners, Mr. Spielberg’s production company, was one of three parties to a $9.5 million settlement agreement with an actress on the CBS show “Bull” who was dropped after she confronted its star about inappropriate comments. A representative for Amblin declined to comment, directing inquiries to CBS, “the sole owner of the show.”]

You are rereleasing “Schindler’s List” after 25 years. Do you believe it can still make an impact?

At the Tribeca Film Festival, I experienced my first audience in 25 years watching “Schindler’s List.” It was a full house, and the reaction — I turned to Kate [Capshaw, his wife] and said “Oh my God, they’re still listening.” With this renewed cycle of hate, and initiatives at the Shoah Foundation, I thought it could open up a conversation that genocide can happen anywhere when an ordinary society goes wrong. Charlottesville and the aftermath made a huge impact on wanting to reissue the film.

If you made the film today, what are the things you would have changed?

No. There’s nothing I would have changed, absolutely nothing. I stand by the film as it has stood its own test of time.

What sticks with you 25 years later about filming in Poland, where the carnage happened?

In four months’ filming in Krakow, the hair on the back of my neck never went down. It was really hard every morning to simply get out of the car and walk to the set. I wanted to use the locations where Schindler stayed in Krakow, including the Jewish Ghetto, even shooting very close to the Płaszów forced labor camp. We shot just outside Auschwitz, building a barracks and backing the train into Auschwitz proper, so when the train exits Auschwitz, it appeared in the film as if it’s entering the death camp. That was one of the coldest nights I ever experienced. That mournful silence within the company of actors — you could hear a pin drop.

The foundation decided to include modern testimonies about genocide when it already has over 51,000 testimonies on record about anti-Semitism. My grandparents were filmed by the foundation in 1996; is video the best teacher?

Look, we’re all storytellers. There’s no one alive who isn’t a storyteller, even if they don’t think they are. Every day is a story. Maya Angelou said: “History, despite its wrenching pain, cannot be unlived, but if faced with courage, need not be lived again.”

What are your earliest memories of being different?

My grandmother taught English to Hungarian Holocaust survivors in Cincinnati. I was 2 or 3, and I would sit with them around the table. That’s where I learned my numbers — on the arm of an Auschwitz survivor who showed me the numbers of his forearm. That was my “Sesame Street.” That’s how I first learned to count.

What more can we do? What do you plan to do?

Teachers and parents who need to take responsibility for the acceptance of hatred in the fabric of society. I’m working with the Discovery Channel and the Academy Award-winning filmmaker Alex Gibney on a six-hour study called “Why We Hate.” I’m not planning any more dramatization on the Holocaust itself. I’m putting all my attention on the documentary format. 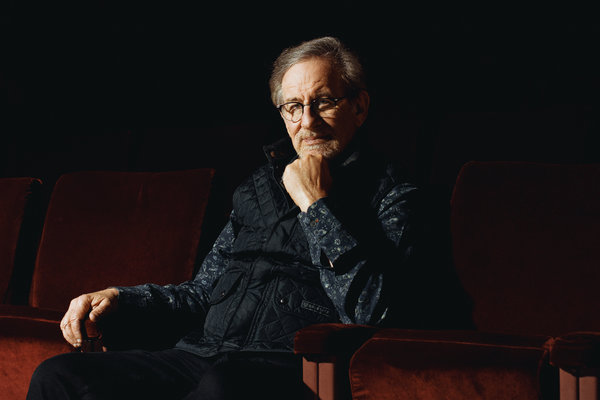 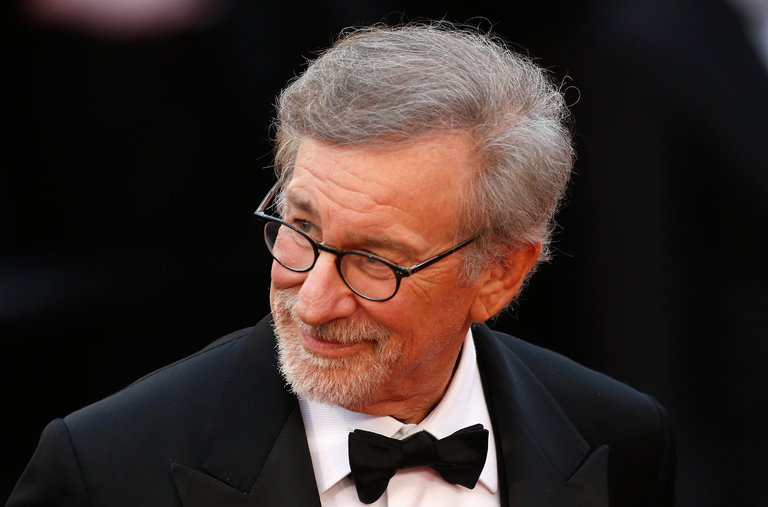