‘He Sees You When You’re Tweeting’

The Russia investigation took an unexpected turn this week with the news that Paul Manafort, the former Trump campaign chairman, had been briefing the president’s lawyers about his discussions with federal investigators. That came to light days after Robert S. Mueller, the special counsel, accused Manafort of violating his plea agreement by repeatedly lying to investigators.

“Now we kick off a very special season. We’re all waiting for that magical man to check his naughty and nice list, because: [sings] Mueller Claus is coming to town! He sees you when you’re tweeting, he knows your hair is fake. He knows when you’ve been bad or bad, ’cause you’re bad for goodness sake! You’re bad!” — STEPHEN COLBERT

In an interview with The New York Post published on Wednesday, Trump said he was open to pardoning Manafort. Colbert said it all seemed like a big con.

“The fix was in, baby. It was the long con! You do this, you get a pardon: One tiny hand washes another.” — STEPHEN COLBERT

‘Thousands of Unopened Emails From Eric’

Trevor Noah was not as excited as Colbert to see the Russia story resurfacing. Here was his pithy assessment:

“The Russia investigation, it’s back in the news. And at this point, this thing is like a sale at a used Honda dealership: It never ends.” — TREVOR NOAH

In a recent interview with ABC News, Ivanka Trump defended herself over the recent revelation that she had used a personal email account for official White House business. (Her father, of course, slammed Hillary Clinton relentlessly during the presidential campaign for using a private email server.) She defended herself by saying that the emails she sent were inconsequential.

O.K., it is a little weird that Ice-T made it 60 years without ever eating a bagel.

“Is mustard gas good on hot dogs? The answer may surprise you: It’s not.”

The country music luminary Garth Brooks, one of whose concerts will air on CBS on Dec. 2, will sit down with Colbert on Thursday. 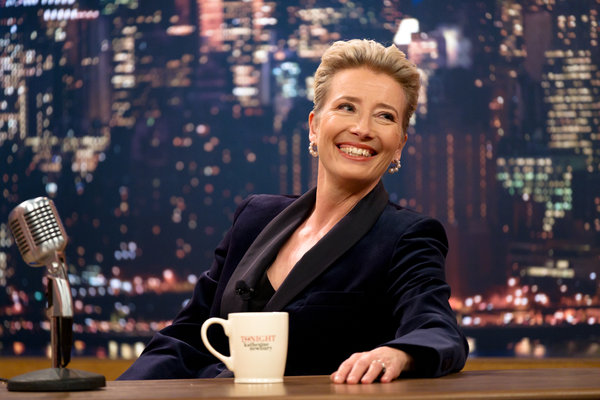 Here’s what’s coming to the Sundance Film Festival: a comedy starring Emma Thompson as a late-night host, a documentary on the sex therapist Dr. Ruth Westheimer, and much more.