Stephen Colbert has been waiting for this moment since Robert Mueller took over as special counsel almost two years ago: Attorney General William P. Barr is expected to make Mueller’s report public on Thursday.

Colbert has been fixated on Mueller’s investigation since 2017, and he’s already been burned a few times — particularly when Barr released a letter saying Mueller’s report stated clearly that Trump had not conspired with Russia.

On Wednesday, Colbert slyly poked fun at himself for all the hope (and airtime) he’s invested in Mueller.

“Now, the comedy duo of Barr and Rosenstein have scheduled a 9:30 a.m. press conference to release the report tomorrow, O.K.? Which will undoubtedly blow the lid off of Donald Trump’s corruption. And until then, I will pass the time [holds up a carton of eggs] counting my chickens, which I will safely place in one basket [dumps eggs into a basket].” — STEPHEN COLBERT

Jimmy Kimmel and Seth Meyers both pointed out that the report was likely to have considerable redactions, so there’s no telling how revealing it will be.

“A redacted version of special counsel Robert Mueller’s report is expected to be released tomorrow morning. Right now we don’t know what’s in it, but tomorrow … won’t be any different.” — SETH MEYERS, showing an image of an entirely redacted page

Although Conan O’Brien joked that there are “over 800 Democratic candidates for president” in 2020, President Trump made it clear that the ones on his mind are the white, heterosexual, male ones over the age of 70. On Tuesday, Trump tweeted, “I believe it will be Crazy Bernie Sanders vs. Sleepy Joe Biden as the two finalists.”

Meanwhile, Jimmy Kimmel poked fun at Trump’s nicknames for Biden and Sanders, saying they don’t get his point across very clearly.

“Is Joe Biden sleepy? I don’t know. To me, he always looks like he’s been up for two days eating cigarettes.” — JIMMY KIMMEL

“‘Crazy Bernie’ and ‘Sleepy Joe’ aren’t even mean. They sound like characters in a Bruce Springsteen song, you know?” — JIMMY KIMMEL

“He was heckled by an anti-gay protester. Yeah, Buttigieg handled it like a pro, and said, ‘Settle down, Mr. Vice President.’” — CONAN O’BRIEN, discussing a recent rally by the Democratic presidential candidate Pete Buttigieg

“Carl’s Jr. is testing out a CBD-infused burger. So far it’s working, ’cause customers eat the burger, walk outside, look up and say, ‘Sweet! Carl’s Jr.!’ and then walk back inside.” — JIMMY FALLON

“Easter is this Sunday. ‘He is risen!’ said the White House staff around 11 a.m.” — SETH MEYERS

“A university professor in Japan is under investigation after he taught his science class how to make the drug ecstasy. To be fair, teaching your students how to make ecstasy seems like a great idea — when you are on ecstasy.” — JAMES CORDEN

Conan O’Brien visited Australia and tried to guess at the country’s slang terms. He made a lot of blues (mistakes, that is).

Wherein Jimmy Fallon runs his fingers through a mound of worms.

Samantha Bee will sit down on Thursday with Stephen Colbert, her former “Daily Show” colleague. 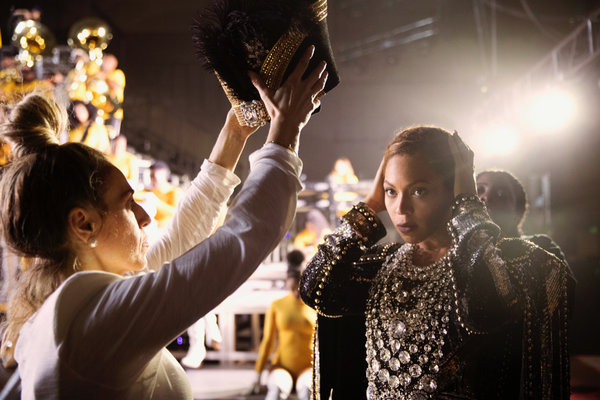 During Beyoncé’s Coachella performance last year, DJ Khaled proclaimed that the festival would heretofore be known as “Beychella.” And it hardly felt like hyperbole. Here’s our review of “Homecoming,” the new Netflix documentary about that monumental concert.