In 2006, “Step Up” arrived at the tail end of something like a dance craze in American cinema, an era of sprightly, sweat-streaked films such as “Save the Last Dance,” “You Got Served,” and “Dirty Dancing: Havana Nights.”

The movie — a low-budget drama about a young ne’er-do-well who strives to prove his worth in a ballet recital at a prestigious inner-city arts school — was an unlikely candidate for blockbuster status, even on the heels of Fox’s “So You Think You Can Dance,” which debuted the year before. Yet it proved extraordinarily successful, earning over $100 million worldwide and spawning four lucrative sequels and, most recently, a hit TV series.

Season 2 of that series, “Step Up: High Water,” had its premiere on YouTube Premium in March, and the first episode was watched more than 10 million times in its first week, according to the streaming service. As of early May, it had 17.8 million views.

The franchise’s endurance more than a decade later is even more surprising than the original film’s splash: Such continual triumphs are typically reserved for big, special effects-heavy fantasy epics like “Harry Potter” or “Star Wars,” not modest, cheerful underdog stories about competitive street dancing, in which the only action consists of pops, locks and twirls.

And unlike most long-running properties, the films and the show share little in common with one another: There’s no ongoing story, no recurring central figure for audiences to emotionally invest in from sequel to sequel. (Moose, a fan favorite played by Adam G. Sevani, is virtually the only significant character to appear in more than two of the five movies.)

What is it about “Step Up” and its various offshoots that have made it apparently so irresistible to viewers for so long?

Not Just a Dance Movie 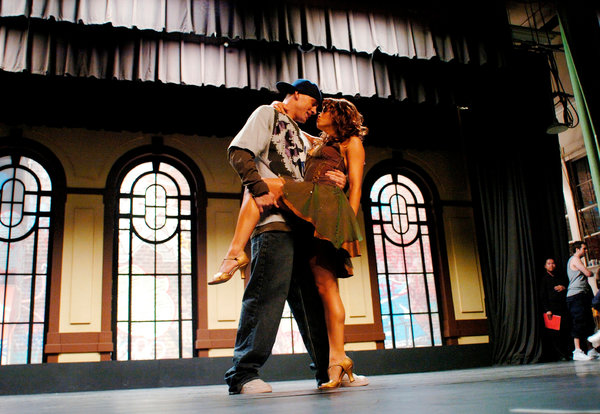 The first film set itself apart from other dance-heavy movies by foregrounding the narrative; it was set in the world of dance, but wasn’t expressly about it.

“What was important to us was that it wasn’t just a dance movie, but that it was a drama with a dance element,” explained Adam Shankman, the director of “The Wedding Planner” and “A Walk To Remember,” and producer of the “Step Up” movies. “You know, kids from opposite sides of the tracks finding each other.”

For “Step Up,” Shankman hired Anne Fletcher, a choreographer he describes as his best friend, to direct the film; the script was penned by Duane Adler (“Save the Last Dance”) and Melissa Rosenberg (the “Twilight” movies). Because Shankman and Fletcher had both worked in dance, they were keen, Shankman said, “to have people who could really dance.” They cast the up-and-coming actor and dancer Channing Tatum as the lead.

When the movie was released in August 2006, Shankman and Fletcher were in Toronto, working on the remake of “Hairspray.” Shankman remembers going to a theater on opening night and being surprised to find “a line around the block to get in.” The movie cost $12 million to make. It earned that back nearly 10 times over.

Around this time, Universal Studios had begun churning out a number of direct-to-video sequels to “Bring It On,” the popular high school cheerleader comedy. Summit Entertainment, the studio behind “Step Up,” approached Shankman and his co-producers about doing the same. “We went, ‘Sure, why not?’” said Shankman.

“Step Up 2: The Streets,” released in 2008, feels more like a spinoff than a true sequel. Tyler Gage, the delinquent-turned-dancer played by Tatum in the first “Step Up,” appears only for a few moments to pass the baton to the new protagonist Andie, played by Briana Evigan.

The story is similar: Kids from opposite sides of the tracks find each other, again. But where the first film strove to prioritize drama over dance, the second is more interested in the acrobatic gyrating of its capable stars. If “Step Up” is a “drama with a dance element,” “Step Up 2” is a dance movie straight-up.

“Step Up 2” is considerably more entertaining than its predecessor, full of ecstatic brio and Busby Berkeley-ish panache. That’s thanks in part to its director, Jon M. Chu, who went on to make last year’s enormously successful “Crazy Rich Asians.”

Chu delights in the physicality of his young performers, and rather than pretend to care about the story, he relishes every opportunity to linger on bodies in motion — often at the expense of conventional niceties like character development and plot.

“My whole thing was that if I’m going to do a dance movie sequel, I want more dancing,” Chu explained in a recent phone interview. “The first one had maybe four or five dance numbers. I wanted to fill this one with dance. It’s the language of the movie.”

The goal, he added, was to make “sort of a dancical” — a musical with dance instead of song.

“Jon always saw these kids as like superheroes,” Shankman said. “He really put front and foremost their talent, as opposed to the drama of their story.”

The shift in emphasis proved to be a turning point for the series. The studio was so impressed by Chu’s vision it decided to scrap its original direct-to-video plan for “Step Up 2,” quadruple its budget and release it theatrically. It became an even bigger hit than “Step Up,” and the studio quickly greenlit a third.

Chu returned to direct “Step Up 3D” — an idea inspired by “Captain EO,” the 3D dance movie made for Disney’s theme parks in the 1980s by an all-star creative team: It starred Michael Jackson and was written by George Lucas and directed by Francis Ford Coppola. (Chu had a nostalgic affection for the film.)

At this point, Shankman admits now, “it started to feel a little weird”: What once had been a relatively serious drama “had lost the necessity for real-world stakes,” as all the studio seemed to want was “great-looking people and incredible dancing.”

Others may argue this is exactly when the “Step Up” movies hit their stride.

“Step Up 3D” abandons every pretense of conventional storytelling. The movie is about an underground dance studio for disadvantaged teenagers in New York City under threat of foreclosure by a bank demanding overdue rent. But, of course, there’s a dance competition coming up, and if the plucky heroes place first, they’ll be able to pay their bills with the prize money.

Chu considered the making of “Step Up 3D” to be “amazingly fun,” and it shows. The movie is a buoyant, irrepressible marvel of sugar-rush frivolity. Like a great pop song, it doesn’t care about being serious, because not being serious is more fun.

“Step Up 3D” was the most successful film of the franchise, earning more than $150 million globally. The two other films that followed — the Miami-based “Step Up Revolution” and the Vegas-set “Step Up All In” — were equally lighthearted, but excitement for the series began to wane. (“Revolution” earned $140 million and “All In” topped out at $86 million.)

Looking back, Shankman attributes that lucrative run to the franchise’s positive spirit, which has been especially resonant among international audiences, not unlike the “Fast and the Furious” series.

“Everybody can appreciate it,” he said. “You are not alienated by any part of it — it moves from culture to culture.”

A Return to the Roots

“Step Up High Water” feels more like a “Step Up” reboot than another “Step Up” sequel.

None of the dancers or characters who romped and frolicked their way through the movies return. The series has gone back to its roots, again shifting its focus to a story rather than ostentatious footwork. This time it’s set at an elite performing arts school in Atlanta founded and bankrolled by the brilliant but megalomaniacal pop star Sage Odom (played by the real-life pop star Ne-Yo, channeling Kanye West). The school is fraught with romance, rivalry and gangland violence — a bit like “Degrassi,” with more dancing.

The showrunner, Holly Sorensen, said that though she felt the movies were “delicious,” she wanted the show to be more “poignant and real.”

“My pitch was really grounding it in reality as much as possible,” she said.

It makes sense that “Step Up” would find new life on YouTube, where dance videos already thrive. The franchise began in a time when people eager to watch great dancing had to find it in movies or live performance. Now that content — and the audience for it — has largely drifted online.

Susanne Daniels, YouTube’s head of original content, had been interested in bringing the franchise to the platform for a long time; viewers watched dance videos on YouTube over 80 billion times in 2018, she said.

Shankman seems relieved by the franchise’s direction on the small screen and pleased with the back-to-basics approach of “High Water.” The drama has returned; the heroes, once more, are back firmly on opposite sides of the tracks.

The movies eventually became too obsessed with being “bigger, bigger, bigger,” he said. “I kept going, like, where do you want to put it next? Space?”

He is kidding, but you can see the appeal: zero-gravity dancing among the stars. Based on its track record and staying power, “Step Up” just might get there one day.