To many people my age, the image of Stan Lee is so iconic that it is funny to think of a time when I had no idea what he looked like. I heard his voice long before I ever read his words or saw him.

“Face front, heroes!” he intoned with what I would always recall as his trademark bombast during an early episode of the 1970s Saturday morning cartoon “Spider-Man and His Amazing Friends.” He continued: “This is Stan Lee. Believe it or not, you asked for today’s story!” His enthusiasm for the adventure that was about to unfold was contagious. I believed I had demanded it!

I’ve covered comic books here at The Times since 2002, but I started reading them regularly in 1981. Though I had already encountered many superheroes in animated form, my discovery of comic books took my love to a new level. And in those pages, Stan Lee’s name was inescapable. If you wanted to start at the beginning, as many readers did, perusing the early issues of the Fantastic Four, Daredevil, Spider-Man and the X-Men invariably lead you to him — as well as to the names of the extraordinary artists who created those characters with him. Later on in my reading life, I would catch his credit, “Stan Lee presents,” on the title page of stories by other writers. It always felt like a seal of approval.

His personality always popped, especially in the back pages, which were typically devoted to letters from fans and included his editorials, titled “Stan’s Soapbox.” (They were reprinted in 2008 and some of them turned up on Twitter on Monday as he was mourned and remembered.) He spoke directly to us, sharing the latest Marvel news or responding to questions (or quibbles) from sharp-eyed readers. He helped foster a sense of community, long before comic book characters were omnipresent in pop culture. His words made us feel as if we belonged somewhere.

[Read our obituary and a tribute comic by Brian Michael Bendis.]

Eventually I saw him, all the time, in the movies. On Monday afternoon, after I heard the news of Lee’s death, I chatted on Facebook with my geek friend Oren Phillips, who wrote: “There really wasn’t a human face to DC. It was Stan Lee who became the face of all comics.” Lee’s Marvel film cameos began in 2000 with “X-Men,” almost a decade before they became the regular, behemoth cultural events they are today. In 2002’s “Spider-Man,” he saves a young girl from falling debris and while watching it I had a surprising feeling: pride. Here was the paper creation of Lee and Steve Ditko in big-screen glory. This wasn’t the modest CBS “Amazing Spider-Man” I grew up with (and crushed on) in the 1970s or the comic books that I hid in notebooks to not be discovered as a nerd. This was in public, in a crowded movie theater, and there was a kinship in the audience of comic book fans (and their companions): we didn’t have to hide our affection for our childhood heroes any longer.

This summer, Lee even appeared in “Teen Titans Go! To the Movies,” an animated film with characters from Marvel’s Distinguished Competition (DC Comics). In one scene, Lee (well, his voice) hams it up in the background until he approaches the viewer. “Hey everybody, look at me, doing my subtle cameo,” he declares, while music plays, he dances and strikes action poses, and “Stan Lee” logos appear on the screen. He returns later and says, “I don’t care if it is a DC movie — I love cameos!” It was a sign of how self-effacing he could be: poking fun of himself in a rival’s movie. 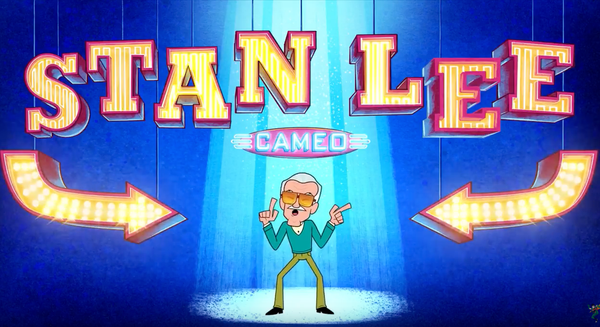 I reached out to the rest my geek squad to ask them how they were feeling about the world without Lee. One of my buddies, Sean McInerney, wrote in an email, “I never met Stan Lee in person, yet yesterday when he passed, my family, friends and even my co-workers reached out to offer me their condolences.” I had a similar experience at work, with colleagues expressing their sympathy and my sister calling me to say sorry for my loss. It was an odd sensation: undeserved yet soothing.

I never had the chance to meet Lee in person, but we spoke once on the phone. When the idea came up, more than a decade ago, to film “Last Word” videos with prominent figures to be published along with their obituaries, I immediately thought of the stories Lee could tell. Initially paralyzed about how to approach him, I eventually wrote a note that tried to convey the project. He left a voice mail message (Stan Lee’s voice! Speaking to me!) and I steeled myself to return his call.

He picked up and there was that voice, transporting me back to Saturday morning cartoons. I hemmed and hawed, but he saved me. He understood the goal and took it in stride. He said: “The only terrible thing will be that I won’t be around to hear people say how wonderful I was.”