For years, orchestras have courted the visionary conductor Esa-Pekka Salonen. Critics have frequently put his name at the top of their wish lists when big jobs opened up.

But Mr. Salonen, who helped make the Los Angeles Philharmonic one of the nation’s most innovative orchestras during a 17-year reign, always demurred, saying he wanted more time to compose, not another conducting post.

So the news that Mr. Salonen, 60, will become the next music director of the San Francisco Symphony, which the orchestra announced on Wednesday, is sure to stun the classical music field.

[Our critics choose the best classical music of 2018.]

The move solidifies the West Coast’s position as the center of American orchestral experimentation. It solves San Francisco’s tricky problem of finding a successor for a beloved music director, Michael Tilson Thomas, who will have shaped the ensemble for 25 years when he steps down in 2020.

And it will place Mr. Salonen, one of classical music’s great disrupters — and the rare conductor who is tech savvy and cool enough to have been a pitchman for Apple — at the helm of an orchestra seeking to feed off the creative energy of Silicon Valley. 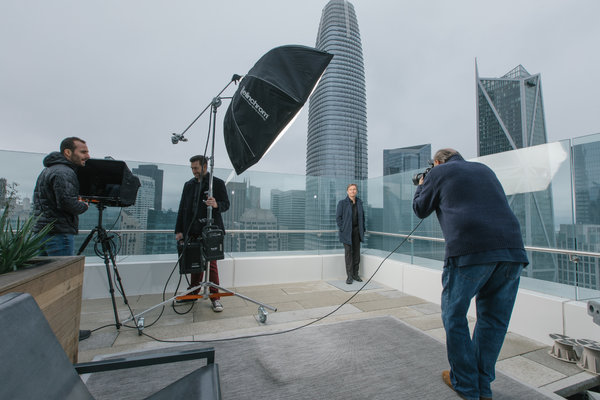 “When I started talking to them,” Mr. Salonen said in an interview here last week, “I really felt that everything I had been thinking about — my ideas about an orchestra as an institution, my ideas about tech and music, my ideas about repertoire and how I would like to position the orchestra within the community — it just resonated.”

For Mr. Salonen, it is also a grand return to the Pacific. Deborah Borda, who worked closely with him in Los Angeles and is now the president and chief executive of the New York Philharmonic, said, “Even though he’s a Finnish guy, he’s a Californian in his soul.”

In San Francisco, Mr. Salonen hopes to shake up the standard orchestral structure, recruiting artists like Nico Muhly, Claire Chase and Esperanza Spalding to join what he called “a think tank, a collective-slash-committee, a politburo of young artists and musicians whose work I admire” to help him rethink the possibilities of what a symphonic ensemble can be.

Thomas W. Morris, who has run the Cleveland Orchestra and the Boston Symphony Orchestra, said Mr. Salonen’s hiring was a signal that San Francisco did not want its next step to be business as usual.

“I think this is going to be about much more than a music director deciding, ‘What are my 11 weeks of concert programs going to be,’” Mr. Morris said.

Since leaving Los Angeles, Mr. Salonen has composed a number of big works, including a cello concerto for Yo-Yo Ma. But he said that he had increasingly thought about taking another music director post that would allow him to explore repertory, put his ideas about orchestras into practice and find greater stability — which he came to believe would be good for his own music.

“I realized that being on the road for hundreds of days every year is actually not very good for composing,” said Mr. Salonen, who plans to move to San Francisco.

The committee summarized the job description with five bullet points: musicianship, leadership, vision, motivation and evangelism. Mark C. Hanson, who became the orchestra’s executive director last year, said, “As we saw this profile coming together, and compared it to our developing list of possible candidates, we all came to realize that one name stood out.”

In August, a small delegation from the orchestra flew to London, where Mr. Salonen was conducting the Philharmonia Orchestra at the BBC Proms. (The Philharmonia announced on Tuesday that he would step down as its principal conductor in 2021.) Melissa Kleinbart, a violinist with the San Francisco Symphony who was on the trip, said the goal was asking him to deepen his relationship with the orchestra, which he has only conducted three times.

“We never imagined that he was in a place where he was interested in a music directorship,” she said.

But Mr. Salonen liked what he heard. “Obviously these conversations are never: ‘Would you like to become so-and-so?’” he said. “It’s more like: ‘Do we have common ground?’”

They found they did. In October, Mr. Cohler flew to Seoul, where Mr. Salonen was conducting, and over lunch at a French restaurant on the 81st floor of a skyscraper, the music director position began to take shape in earnest.

Mr. Salonen was quickly slotted into a vacancy at the podium in San Francisco this January, when he will conduct works by Sibelius, Strauss and Anna Thorvaldsdottir. He will officially begin his tenure in September 2020 with six weeks of subscription concerts and a tour of Asia, followed by 12 to 14 weeks in each of the subsequent seasons of his five-year contract.

This will not be the first time Mr. Salonen has followed in the footsteps of Mr. Thomas. Mr. Salonen’s international conducting career was launched in 1983, when he filled in for an ill Mr. Thomas and conducted the Philharmonia in Mahler’s Symphony No. 3 on short notice. Mr. Thomas praised the appointment.

“He definitely is somebody who has that sense of the interesting mission that the West Coast has been on for a while, and he has certainly been a part of it,” Mr. Thomas said, adding: “I’ve always felt with the San Francisco Symphony, since I first began to work with them, that they are really up for looking at things in new ways.”

The orchestra has been projecting strength lately: Last month, it announced a new contract that will raise the annual base salary of its musicians to $185,640 in the coming years, which should keep the group at or near the top of the list of the best-paid symphony orchestras in the country.

It was no accident that, when Mr. Salonen visited San Francisco last week to prepare for the announcement, his photo shoot was held on the roof of a new glass tower in the heart of SoMa, the rapidly changing South of Market neighborhood. The city’s emerging skyline — topped by the new Salesforce Tower, the tallest office building in the West — loomed behind him.

Then there was his itinerary, atypical for a new maestro: Among other activities, he sat down with Carol Reiley, a scientist who works with artificial intelligence and robotics. He has invited to her serve as one of his new collaborative partners at the symphony, along with Mr. Muhly, the composer; Ms. Chase, the experimental flutist; Ms. Spalding, the jazz bassist and vocalist; Nicholas Britell, the pianist and composer; Julia Bullock, the soprano; Bryce Dessner, the composer and guitarist of The National; and Pekka Kuusisto, the violinist.

Ms. Chase said that she was attracted by Mr. Salonen’s willingness to break rules. “Questions I am looking forward to exploring are: How can an orchestra belong to a city?” she wrote in an email. “How can it be of service to that city as it evolves an art form that has for far too long been stagnating in its own echo chamber of unquestioned greatness? What kinds of communities could it engender and sustain?”

Mr. Salonen, who has worked with the Philharmonia Orchestra on virtual reality projects, immersive installations and an iPad app, seemed to relish hearing Ms. Reiley’s ideas about the creative and educational possibilities technology could foster.

“What would happen if you had 12 fingers?” he asked her, exuberantly brainstorming. “Or four hands? Or if the number of movements per second were a thousand times what a human could do? How would that affect music, and expressive possibilities?”