‘Who’s Getting the House?’

On the eve of the election, early-voting numbers suggest that this could be a record-breaking year for midterm turnout. Samantha Bee, hosting a special, election-eve edition of “Full Frontal” on Monday, warned audiences against taking those reports of high turnout as an excuse not to go to the polls themselves.

“You cannot take this election for granted. I certainly won’t make that mistake again. I have a full-on, Ben Affleck-level back tattoo that says, ‘Hillary Clinton is the president and my favorite show is “House of Cards!”’” — SAMANTHA BEE

Stephen Colbert joked about how intense and high-stakes the election feels. Then he threw a jab at Republicans.

“In America’s ongoing bitter divorce, the big question is: Who’s getting the House?” — STEPHEN COLBERT

“CNN just released new numbers on their generic ballot, where women favor Democrats 62 percent to 35 percent. But Republicans aren’t worried, because they have a history of not believing women.” — STEPHEN COLBERT

The actor Mike Myers made a cameo on “The Tonight Show,” appearing in character as Dr. Evil (again). He told Jimmy Fallon he was running for Congress on a “Make America Evil Again” platform, and outlined his “five-point evil plan.” And he explained how he decided to run in the first place.

JIMMY FALLON: I just didn’t realize that you wanted to run for office.

MIKE MYERS: Well, originally I was hoping for Brett Kavanaugh’s job, but Trump said I was too even-tempered for that.

“Many states are seeing a massive turnout. For instance, Florida has seen a huge increase in young voters. Although, to be fair, in Florida a ‘young voter’ is anyone under 75.” — JAMES CORDEN

“A Japanese man has broken the Guinness world record for the most skips over a rope in 24 hours, with a total of over 151,000. This story was first reported by the man’s downstairs neighbor.” — SETH MEYERS

“A luxury hotel in the Maldives has opened a $50,000-per-night underwater villa in the Indian Ocean. And if you love real estate that’s underwater, try Trump’s hotels.” — SETH MEYERS

“The New York City Marathon was yesterday, and President Trump freaked out because he thought the caravan was here. [impersonating Trump] ‘Oh no! Oh no, they’re going to vote!’” — SETH MEYERS

Jimmy Kimmel’s team duped passers-by into thinking it was Election Day, then they persuaded them to lie about voting.

Bee pushed her viewers to familiarize themselves with their local-level races, not just statewide candidates.

Colbert, Kimmel, Seth Meyers and Trevor Noah will all go live on Tuesday, commenting in real time on the election results. 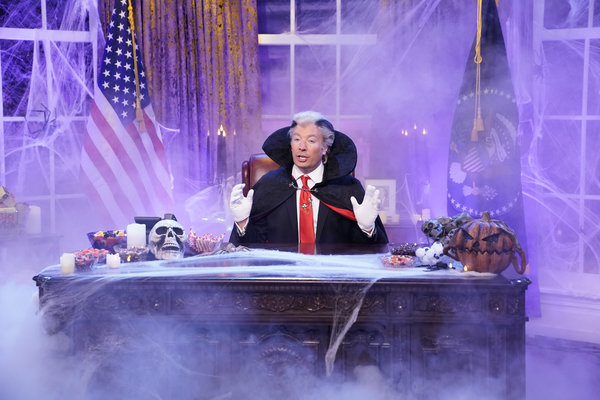 The late-night hosts have been going after President Trump on a nightly basis since 2016. What effect has it had? Today’s midterm election is the closest thing we have to a referendum on their impact.