The Museum of Modern Art’s Department of Architecture and Design has given the lasting impression that the Bauhaus, with its skeletal steel chairs and practical teakettles, owned Modernism for much of the last century. But 56 well-stocked booths at the Salon Art + Design fair at the Park Avenue Armory, which opened Thursday and runs through Sunday, offer an alternative story.

Consider the evidence: a fluffy armchair upholstered with white tails of mohair from Rome’s Giustini/Stagetti gallery; a bronze bench sculpted as a grinning lynx from Philadelphia’s Wexler Gallery; two concave dish mirrors shaped like a pair of gigantic contact lenses, hanging at the Maison Rapin. And then at Adrian Sassoon, there’s a thick, erect, 7-foot-high, ceramic vase shaped like a column and painted with fig leaves. It’s enough to make any man jealous.

You smile your way through the fair. There’s wit, spirit and cheek. The sass of a slipper chair by the Indian designer Satyendra Pakhalé in Ammann gallery in Cologne leads with a pair of breasts, like an ancient Greek sphinx, and it’s just as insolent today as it was when designed over a decade ago. 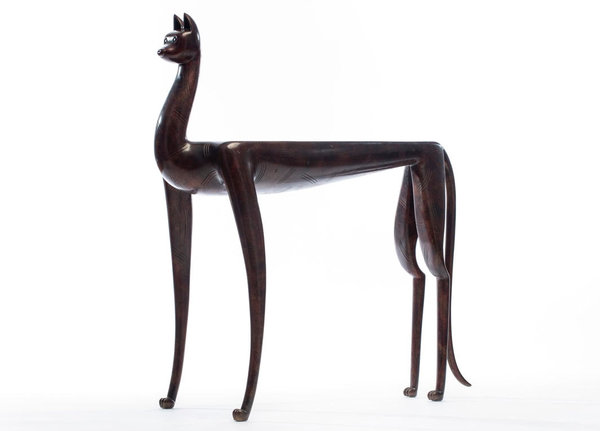 In this year’s Salon, instead of Bauhaus ideology delivered with strict Euclidean geometry, there’s a high delight quotient. This branch of bespoke modernism played out in ateliers rather than in factories: Artists produced limited art editions rather than toasters and coffee pots stamped out by the thousands. The artists didn’t heed rules of industrial efficiency. They gorged on their imagination, and sometimes on their libido.

Don’t expect Ikea prices, of course. But compared with the sticker shock of serious art these days, modern and contemporary designs are accessible collectibles. And, in an era of digital living, twisting Mobius-strip chairs and kidney-shaped coffee tables seem more relevant than veneered antiques. Somehow, Federico Munari’s boomerang couch, circa 1950, at the Maison Rapin works better than Biedermeier when streaming Hannah Gadsby or “Game of Thrones.”

But the show does not tell its Modernism story in a straight line, and it doesn’t even start with Modernism. In New York’s Phoenix Ancient Art gallery, the abstract, smoothly contoured marble Neolithic mother goddess is as modern and abstract as a Brancusi, and the bronze, fourth century B.C. Greek warrior’s helmet, designed to deflect the slings and arrows of battle, already embodies Modernism’s maxim, form follows function (otherwise you’re dead).

Some galleries root Modernism in well-known American and European classics. The New York-based Bernard Goldberg Fine Arts exhibits oak chairs by Frank Lloyd Wright, each a small piece of architecture, and in the booth directly opposite, Yves Macaux shows Wright’s Austrian contemporaries. Cabinets, chairs and lamps by the architects Otto Wagner, Josef Hoffmann and Adolf Loos are arranged with drawings by Gustav Klimt and Egon Schiele, to suggest a room of the period.

Though many exhibitors hail from the United States, most are European, and British, French, Danish and Italian galleries came with evidence of their own local modernism. Galleria Rossella Colombari in Milan exhibited a spectacular double wooden desk of cascading shelves attributed to the Venetian architect Carlo Scarpa, and another Milanese gallery, Nilufar, brought rare leather stools, almost like campaign chairs, designed in the 1930s by the father of modern Italian design, Gio Ponti.

Surrealism influenced many pieces, whether it was the grandfather clock tied up in a knot by the British sculptor Alex Chinneck, or a bronze bench dripping dew drops by Reinier Bosch in the Priveekollektie stall.

Of course there were classics in crafted wood, like a monumental George Nakashima table and bed at Philadelphia’s Moderne Gallery, and across the aisle, Danish modern design at Copenhagen’s principal design gallery, Dansk Mobelkunst. A 1935 table by Mogens Koch exemplified Denmark’s tradition of no-nonsense simplicity, and it stood next to an updated take on Danish modernism, a crisply cut Minimalist table by the London designer Michael Anastassiades.

By contrast, in the Sarah Myerscough Gallery, British artists with a rarefied sensibility using exotic techniques reinterpreted woods that craftsmen have worked for centuries. Eleanor Lakelin bleached, sandblasted and hand-turned horse chestnut burr into amphoras that reveal the fibrous chaos beneath its bark.

But no show of modernism today would be contemporary without the handiwork of the computer. In Galerie Maria Wettergren, a Danish-born, London-based designer Mathias Bengtsson created a protoplasmic maple tabletop set on skeletal legs that grew organically from a natural algorithm that he scripted into software. Another piece, the undulating “L’Infini Chair ” in Galerie BSL, looks digital, but a Canadian visual artist, Gildas Berthelot, actually carved the curvilinear lounge chair out of bleached maple. Sitting on “L’Infini” delivers the thrill of surfing a lunging wave.

Most galleries built environments so that their objects could be understood as livable pieces in an immersive homelike setting, but some installations took the idea well beyond domestic comfort. Cape Town’s Southern Guild showed artists rooted in South African culture. The improbably named Porky Hefer, a former ad man, created a suspended nest made of natural grasses and cane into which a person could retreat for a little solitude. Rich Mnisi designed a sprawling leather chaise (Nwa-Mulamula) comfortable enough for several people. He shaped an accompanying side table as an eye that hovers over a pool of tears to honor his great-grandmother and generations of black women who shed their tears of work and sorrow across generations.

Perhaps the most off-the-grid installation was the Todd Merrill booth, a Hollywood fantasia: chromed branches of a chandelier floated over demi-settees and a tufted sofa, arranged symmetrically as in a Busby Berkeley musical.

The gallery pushed good taste to an intriguing decadence definitely outside the Bauhaus canon. It was one extreme of modernism in a salon curated to show that there have been — and are — many.

The Armory is a very big room. The Salon proved to be a very big tent.