But there was a time when nature, not honking cars or bulging shopping bags, predominated in this part of the island. At the beginning of the 19th century, the land was hilly and covered with mountain laurel, violets and old oak trees. Farms thrived nearby.

The botanist David Hosack transformed this landscape into the country’s first public botanical garden in 1801. His creation, the 20-acre Elgin Botanic Garden, would come to contain about 3,000 species of plants. Thomas Jefferson passed on plant samples from the Jardin des Plantes in Paris to Hosack, and Alexander Hamilton collected plant cuttings from the Elgin grounds. It was a space where New York City residents were exposed to exotic flora and fauna like kumquats and figs.

The Elgin garden survived for less than a decade after Hosack sold it to New York State in 1811. But in honor of the 250th anniversary of Hosack’s birth, Rockefeller Center has collaborated with the New York Botanical Garden and Future Green Studio to reimagine the 845-square-foot Channel Gardens. And through June 28, the garden will share the spotlight with the 16 sculptures on display in “Frieze Sculpture at Rockefeller Center.” 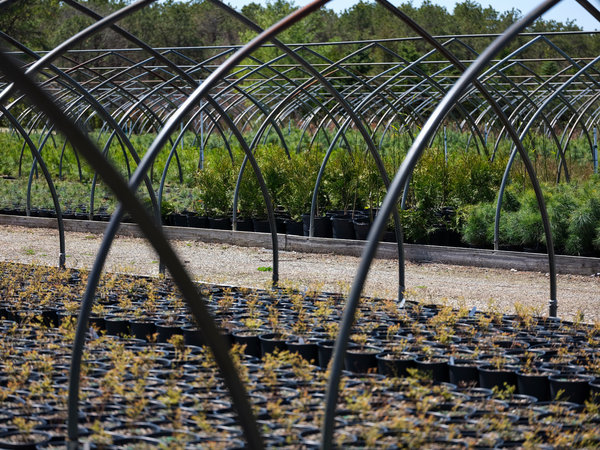 The plan is to fill the reconceived gardens with native species that reflect environments found throughout the state, particularly species that no longer grow naturally in New York City, like paper birch. The two spring plantings, he explained, are modeled after the Hudson Valley and the Adirondacks.

“The most important thing for us was to not have a formal garden, but to have this really more representative of a found condition,” David Seiter, the design director and a founder of Future Green Studio, said. “We’re taking this little slice of nature and re-representing it in a kind of miniaturized condition.”

Before the first plants went into the ground, Future Green worked for weeks to design and assemble a nest of woven willow branches with a diameter of 25 feet. The organization enlisted a willow farmer and weaver, Howard Peller, to come from Ohio to Brooklyn to teach his technique. The nest and 2,320 plants from six regional nurseries were shipped into the city by flatbed trailers and box trucks before being installed by a team of 50 workers during the night on April 17.

There were some trade-offs for the first planting. The desire to fill the gardens with native species had to be balanced with natural constraints (not many local plants are leafy at this time of year) and cultural ones (giving visitors a more conventional Easter experience), so the initial grouping mixed New York varieties like mountain laurel with Easter lilies and dwarf daffodils. (The nest was removed on April 24 to make room for a sculpture by Kiki Smith.)

In the coming year, Future Green will plant four more seasonal gardens with the help of the New York Botanical Garden. The next garden went in on Friday and will continue to build on the Hudson Valley-Adirondacks theme.

While Hosack’s garden may seem light years away from the current project, Victoria Johnson, an associate professor of urban policy and planning at Hunter College and the author of a book about Hosack’s work, found common ground between the two.

“To the extent that it can trigger any curiosity about our island and its native species and the very idea of native species, I think it’s totally in Hosack’s spirit,” she said. “Hosack was so curious about the plant world, and he tried to pass that on and he did pass that onto future generations.”