In all seriousness: What can’t Yuja Wang do?

This star pianist has built her reputation on breathtaking mastery of the standard repertory, like the chamber works she played last Wednesday with the violinist Leonidas Kavakos at Carnegie Hall. Or Robert Schumann’s Piano Concerto, which she’ll do with the Boston Symphony Orchestra later this week.

But in between those two dates, she stopped by Carnegie’s Zankel Hall on Monday for something entirely different: a comedy show. One with music, of course. And, as always, she was radiant in Rachmaninoff and Lutoslawski.

But there was — more.

She rapped! She sang and danced through a “West Side Story” medley! She did one-legged, upside-down yoga on a piano bench! And along the way, she never lost an ounce of virtuosity.

As part of Ms. Wang’s season-long Perspectives series at Carnegie, she was appearing with the musical comedy duo Igudesman & Joo — Aleksey Igudesman, violin, and Hyung-ki Joo, piano — in a program called “The Clone,” an evening-length version of a sketch they posted on YouTube in 2017.

Their approach to performance taps into a joy and curiosity often left behind in music school, which is where Mr. Igudesman and Mr. Joo met as youngsters in Britain. What student hasn’t gone off book for the sake of a joke, to parody someone else’s mannerisms or change the key of a well-known piece for comedic effect? The more skilled you are, the better the results.

There is no skill lacking in Igudesman & Joo’s act: They have training fit for the concerto circuit, though, in the tradition of P.D.Q. Bach, they have never surrendered the fun of exploiting the comedy in classical music.

An entire bit at Zankel consisted of transposing Mozart’s “Rondo alla Turca” from A minor to A major. There’s a bit of subtle music theory education there, but the punch line was in the unexpected change of character brought on by the different key. They then went even further, adding B flats for a tinge of klezmer. Later, they seamlessly blended Gloria Gaynor’s “I Will Survive” with Mozart, early opera and hip-hop. 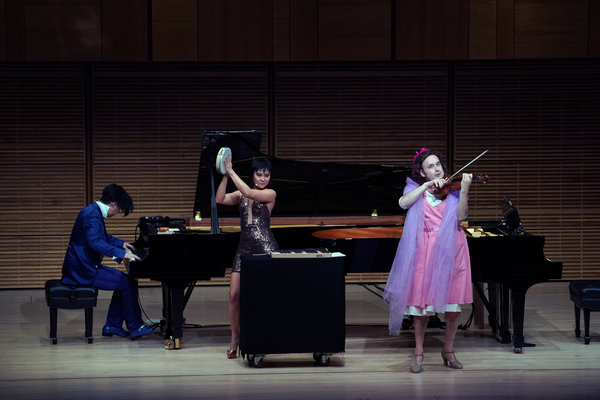 In “The Clone,” however, those moments of playfulness and discovery were buried in jokes that quickly became uncomfortable, even offensive. The sketch’s conceit is a demonstration of all the capabilities of a hypothetical Yuja Wang clone. (Or robot? It’s never really clear.) She arrives in a large box that they say “smells of sweet and sour chicken.” The duo goes on to mock the Chinese language, and when the clone malfunctions, they laugh it off with a shrug: “Made in China!”

Even more difficult to take was the implication that these two men had mail-ordered a woman who obeys their every command and casually accepts their frequent remarks about her sexuality. At one point, Mr. Joo turned to the audience and said, “God, she’s so hot.” Among the cheapest jokes was “How do you turn her on?” followed by “I can think of a couple of ways.” And in the opening, when Mr. Joo came out onstage dressed as her, he said, “I know I’m not Yuja Wang, but some girlfriends do call me Huge-a Wang.”

It’s a shame. Because when the evening hewed more closely to truly musical comedy, it showed just how funny virtuosity — especially that of the multitalented Ms. Wang — can be.