As a critic, I feel it’s my responsibility to tell you what’s wrong with “Tootsie,” the musical comedy that opened on Tuesday at the Marquis Theater.

Let me tell you instead what’s right. It’s a musical. And it’s a comedy.

That might seem like faint praise. But over the decades, the genre that brought us “Guys and Dolls” has withered into a damp tangle of wan jokes floating in a slick of ditties. With few exceptions — including, this season, “The Prom” — musical comedies today are comedic only in the sense that the protagonist doesn’t croak, and musical only in the sense that he does.

“Tootsie” could so easily have been one of those. Based on the first-rate movie starring Dustin Hoffman, it might have made any or all of the mistakes such adaptations typically do. Infidelity. Overfidelity. General witlessness. A central performance unhappily unequaling the original. A borrowed score or one that sounds nothing like the story.

Or, most damagingly: a story so denatured it’s no longer worth the trouble.

“Tootsie,” with a book by Robert Horn and songs by David Yazbek, has somehow avoided all those traps. Though it retains the premise of the 1982 original, it diverges smartly in both plot and milieu. Michael Dorsey, a New York actor who can’t get a job because he’s so difficult, still finds success after retooling himself as a Southern lady named Dorothy Michaels. But it’s no longer a bad soap opera that Dorothy stars in; naturally, it’s a bad musical comedy.

How bad? “Juliet’s Curse” is a sequel to “Romeo and Juliet” in which the resuscitated heroine falls for Romeo’s ripped brother, Craig. 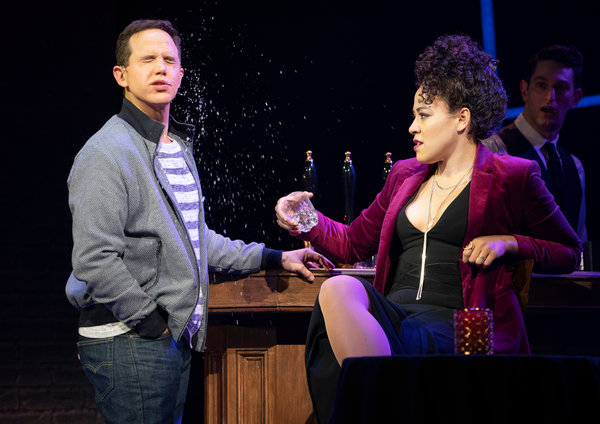 So instead of camera angles and lechers with comb-overs, this is a world of Fosse hands and himbos. Hired to play Juliet’s nurse, Dorothy (Santino Fontana) quickly clocks the show’s ludicrousness and, undermining the toxic director, Ron Carlisle (Reg Rogers), sets out to revamp it. In the process, Michael (also Mr. Fontana, obviously) falls for Julie (Lilli Cooper), who plays Juliet, even as dim Max Van Horn (John Behlmann), who plays Craig, falls for Dorothy.

So far the plot tracks the movie’s closely enough to raise, in a new era, the issues that made it fascinating in the first place. What does a man learn from pretending to be a woman? And what remains masculine about him no matter how thick his makeup?

But exactly because this is a new era, and because an adaptation has to spring its own surprises, the musical develops these issues quite differently. Julie in particular is a far cry from Jessica Lange’s delicate flower; she’s independent, confident and up for anything. (Ms. Cooper makes her tremendously appealing.) So when her friendship with Dorothy stumbles into something more physical, it isn’t the end of the world; it’s just the end of Act One.

Mr. Fontana, in the difficult dual role, gets just about everything right. Visually, his Dorothy is still dowdy — “Faye Dunaway as a gym coach,” a character says — but seems younger and hipper than Mr. Hoffman’s. The persistence of Michael even in Dorothy drag, and later vice versa, is charmingly handled, helping us get past both Michael’s obtuseness and Dorothy’s unlikeliness. Mr. Fontana sings beautifully, in a novel tenor-falsetto blend, and nails every joke.

If his comic timing is impeccable, it helps that he has such great lines to deliver. But even though Mr. Horn’s book bristles with zingers, a lot of the humor is so rooted in story it doesn’t need words. Andy Grotelueschen as Michael’s laconic roommate, Jeff, gets huge laughs just from pauses. He is topped at one point by a door cracking open.

Comedy rarely flows as smoothly as it does here. The secret is more than the book; it’s the songs. Mr. Yazbek is one of the few composer-lyricists working today who can set jokes to music and make them pay. The most obvious instance in “Tootsie” is “What’s Gonna Happen,” a showstopping patter number for Michael’s ex-girlfriend, the neurotic Sandy (Sarah Stiles). In a tumble of words reminiscent of “Model Behavior” from Mr. Yazbek’s underrated score for “Women on the Verge of a Nervous Breakdown,” she goes well past that verge.

But even though his trick rhymes glitter — how he manages to pair “see ya” and “Scalia” is priceless — it’s the complexity of his characterization that really keeps “Tootsie” sparking. Fittingly for a tale of duplicity, everything has to do double duty. The opening number, called “Opening Number,” is somehow an example of both a bad one (for an earlier Ron Carlisle show) and a good one (for “Tootsie”). A vapid audition song (“I Won’t Let You Down”) transforms into a moving anthem when Dorothy uncovers new meaning in it.

To support so much lyrical cleverness, Mr. Yazbek has largely dialed back his music. Its angular, brassy New York sound — I imagined Frank Loesser in a traffic jam — has more in common with his earlier movie adaptations (“The Full Monty” and “Dirty Rotten Scoundrels”) than with his haunting, Tony-winning score for “The Band’s Visit.”

As “Tootsie” is a comedy, that makes perfect sense, but when Mr. Yazbek switches modes — in sincere, never maudlin, songs like “Who Are You?” — the relief is palpable. Though his mocking pastiche is always better than what it mocks, there’s simply too much of it here.

Which brings me back to my critical duty. To pull the Band-Aid off fast: The staging and physical production of “Tootsie” are so trite and vanilla they could pass for the work of Ron Carlisle on “Juliet’s Curse” — or perhaps George Abbott in 1965. (Scott Ellis is the director.) The theory that musical comedy requires a flat, conventional environment to let the jokes stand out is evidently being heeded here. But though “Tootsie” is hardly avant-garde, it need not have been a throwback.

It wasn’t one in 1982, even though some critics already questioned the movie’s gender politics. That was a sign the comedy was working; the ideas buried in the jokes got people thinking. Now, as if spooked, the musical exhumes those ideas too insistently. That a man might enhance his masculine power by masquerading as a woman is a premise, not a platform. One joke about it is plenty; two is diminishing; three plus two speeches and a song is nearly a comedy killer.

Happily, “Tootsie” recovers, thanks in part to its excellent cast, which includes Michael McGrath as an agent and the delicious Julie Halston as a producer. It also benefits from its mastery of a paradox built into the genre. Musical comedy only soars when it’s fully grounded, and “Tootsie,” however unbelievable, has its feet on the ground — in a modest Size 13 heel.

This information was last updated on April 23, 2019