During the recent election season, pundit-friendly phrases like “year of the woman” and “pink wave” were understandably rejected by those who said female candidates should be treated not as a trend, but as contenders every bit as normal as their male counterparts.

[Read a history of classical music — the women-only version.]

The world of opera isn’t quite there yet; productions of works by female composers are so rare they’re still treated as major events. The latest case is Francesca Caccini’s 1625 rarity “La Liberazione di Ruggiero Dall’Isola d’Alcina” (“The Liberation of Ruggiero From the Island of Alcina”), which received a humble but enlightening and lively staging this week by the Boston Early Music Festival at the Morgan Library & Museum’s Gilder Lehrman Hall.

“Alcina” is believed to be the first opera written by a woman, and the first Italian opera to be performed outside Italy — milestones that could still make it more of a historical footnote than a living work of art. But there’s no reason it doesn’t deserve to be programmed alongside Caccini’s contemporaries, like Jacopo Peri and Claudio Monteverdi. Led at the Morgan by the musical directors Paul O’Dette and Stephen Stubbs, and the concertmaster Robert Mealy, the opera’s score is stylistically diverse and forward-looking, with surprising psychological depth and melodic beauty.

Caccini wrote it during a brief but glorious moment for women in music. Florence was under the control of the Grand Duchess Maria Magdalena and Christine of Lorraine, who in the works they commissioned pushed for confident, righteous female protagonists. “Alcina” fittingly featured two strong women as its lead characters.

The opera — like Handel’s famous version a century later — takes its plot from a slice of the Italian epic “Orlando Furioso.” The benevolent sorceress Melissa (sung on Tuesday with warmth and heroism by the mezzo-soprano Kelsey Lauritano) goes to the island of the evil Alcina to retrieve the knight Ruggiero (the tenor Colin Balzer) and return him to his love, the princess Bradamante. 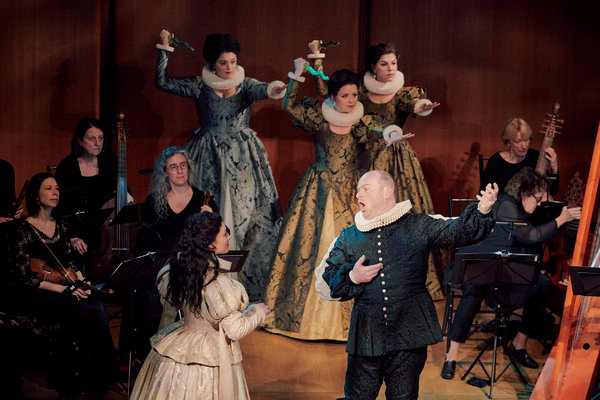 On her enchanted island, Alcina — the soprano Shannon Mercer, who expertly navigated her character’s transformation from beguiling to crazed — seduces knights and, once bored with them, turns them (and those who attempt to rescue them) into plants, convincingly conjured in Gilbert Blin’s production with leafy masks that make the characters, in stately period costumes, seem as if they’re at a ball.

What follows is a witch-against-witch battle for Ruggiero’s soul — with a memorable, all too quick appearance by Margot Rood, as Alcina’s damsel Oreste — that seems to prefigure opera history. In Alcina’s thrall, Ruggiero struggles with sensuality and desire like Tannhäuser will in the 19th century; once spurned, Alcina delivers a lengthy lament that anticipates bel canto mad scenes, complete with orchestral accompaniment that reflects the state of her pain, then her terrifying anger as she vows vengeance.

The original production of “Alcina” ended with a lavish horse ballet to impress the Polish crown prince Wladyslaw during a state visit to Tuscany. At the Morgan, it ended with a dance that fit awkwardly into the small hall, which was already crowded with the chorus and the Boston Early Music Festival Chamber Ensemble. If Caccini warrants a place alongside the greats of her time — and she does — then her “Alcina” deserves a production to match.