MILLBURN, N.J. — If good tunes were all you needed for a good musical, there would be many more outstanding jukebox shows by now. Exhibit umpteenth of how tough it is to master the genre is the limp “My Very Own British Invasion” at the Paper Mill Playhouse.

As its title suggests, this world premiere production superimposes a biographical angle (think “Beautiful”) onto a snapshot of a hip and happening period (think “Motown” for a far worse example).

In this case we are in mid-1960s London, where a milquetoast teenager named Peter Noone (the appropriately affable, sweet-voiced Jonny Amies) is conquering the charts with his band, Herman’s Hermits. Following the path forged by the Beatles, Peter eventually sets his sights on America.

Back-to-back earworms popular on both sides of the Atlantic make up the show’s set list, from the Fab Four’s “I Saw Her Standing There” to Dusty Springfield’s “I Only Want to Be With You,” the Animals’ “Don’t Let Me Be Misunderstood” and, of course, Herman’s Hermits’ own “Mrs. Brown, You’ve Got a Lovely Daughter” and “Can’t You Hear My Heartbeat.”

Yet in the story — cooked up by Mr. Noone, who is credited with the show’s concept, and book writer Rick Elice — Peter doesn’t go marauding in the former British colony out of ambition. No, it’s love that drives him — for Pamela (Erika Olson), a fetching blonde songbird who heads out on a tour of the United States.

Unfortunately for the clean-cut Peter, so earnest in his shiny suit and bowl haircut, Pamela has other interests: a debauched rocker named Trip (Conor Ryan, from the Off Broadway hit “Desperate Measures”) and the illicit substances she discovers in New Orleans. 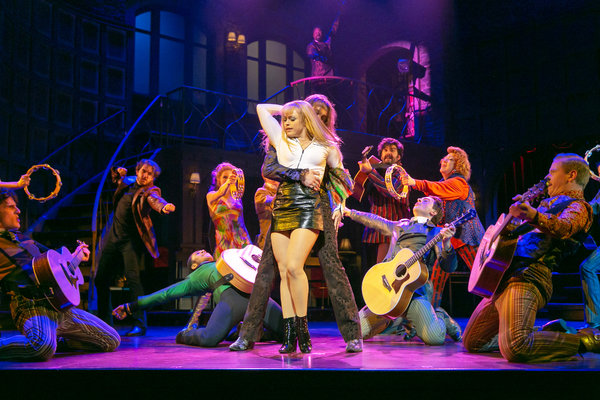 Indeed, the show’s most potentially interesting, and completely unexplored, love triangle is the one involving Pamela, heroin and Trip — a hybrid of Mick Jagger and Robert Plant whose flowing locks and unbuttoned shirts somehow generate less sexual energy than Paul Hollywood’s silver goatee and icy blue eyes on “The Great British Baking Show.” (Meekly rhapsodizing about “heavy metal thunder” in “Born to Be Wild” — a mostly Canadian song, shoehorned in — doesn’t help.)

Most of the action takes place at the London club the Bag O’Nails, inspired by a real joint where up-and-comers rubbed elbows with established stars. (David Rockwell did the handsome bi-level set.) Fronting the house band is an American expat, Geno (Kyle Taylor Parker), who acts as narrator and breathes life into the production every time he opens his mouth — an Otis Redding-esque rendition of “Go Now,” popularized by the Moody Blues, ends too quickly.

Mr. Parker also turns up in the show’s highlight, a smoky duet with Ms. Olson on “House of the Rising Sun” that is atmospherically staged by the director Jerry Mitchell and suggests pop’s darker underside in a few fleeting minutes.

How Geno found himself in New Orleans so he could conveniently sing with the strung-out Pamela is left unexplained. Mr. Elice, who has penned two of the smarter jukebox musicals in “Jersey Boys” and “The Cher Show,” seems to have misplaced his customary craftsmanship. Even his jokes land flat, most painfully those associated with Fallon (John Sanders), the talent manager whose fondness for cutesy acronyms (Trip and Pamela are said to be LAME — “Lustful And Mercilessly Entertaining”) serves as a lone character trait.

Mr. Mitchell’s direction and choreography are similarly stuck at half-speed. The sleepiness of it all is surprising since he had whipped up such frothy energy in the Gloria Estefan tuner “On Your Feet!” — another well-made jukebox show — and in Cyndi Lauper’s “Kinky Boots.”

“My Very Own British Invasion” eventually finds Pamela swerving back to Trip and ending up in leather shorts. “I’m a bad girl; I always will be,” she tells the befuddled Peter — a move as convincing as Sandy going wild at the end of “Grease.”

But their affair has served its purpose: He moves on, wiser about love and life. The audience, however, is left wondering what ever happened to Geno.