Going back to the Greeks, the most powerful tragedies have usually been those in which the outcome could have been averted. Plays like “Oedipus Rex” — or, for that matter, “Hedda Gabler” — show us how human boneheadedness, not fate alone, precipitates woe.

Tragedy is now a different thing, and the beautifully acted double bill that opened on Thursday at the Public Theater, starring Tom Sturridge and Jake Gyllenhaal, makes a fine sampler of modern-day calamity. In both “Sea Wall,” by Simon Stephens, and “A Life,” by Nick Payne, there is no one to blame when disaster strikes — except perhaps God, who is nowhere to be found.

The problem of God’s whereabouts is in fact the underlying theme of “Sea Wall,” the opening monologue. In it, Mr. Sturridge plays Alex, a 31-year-old photographer whose wobbly life has recently stabilized thanks to a wife he adores and a young daughter he treasures.

For fear of spoilers I must not tell you what specifically befalls him, though it is, in a way, beside the point. We know from the start that something bad is coming and, because we have seen plays before, approximately when. We also have a pretty good idea of who will be involved.

What we don’t know is how. As it turns out, it’s an accident too random to have been prevented; even Alex, trying to pin the responsibility somewhere, cannot bring himself to name names.

The name he really wants is God, which makes the play profound in its concerns if somewhat arbitrary in its plot. Anything horrible would have served the purpose — which is not to minimize the effectiveness of Mr. Stephens’s writing. (It is as tight and characterful here as it was in the wonderful two-hander “Heisenberg” and in “The Curious Incident of the Dog in the Night-Time.”) The way he lets dread creep into the story like morning light, and grow until it fills the otherwise nearly empty stage, makes this a ripping yarn in more ways than one. 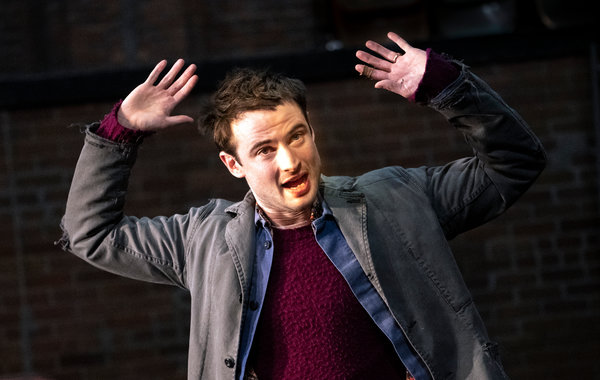 And Mr. Sturridge, whose compulsively watchable work in “Orphans” and “1984” no one called subtle, knows just how simply to pull the threads here. Under the pianissimo direction of Carrie Cracknell, he starts so casually, wandering about in track pants and sneakers, that it’s unclear whether the play has even begun. As he ambles sideways into the story, his naturalism is so convincing that audience members on Tuesday tried to help out when he fumbled for a word. Though the fumble is actually in the script, you’d never have known it.

But as the story spirals toward its climax, Mr. Sturridge grows more expressionistic; what at first seemed like a cameraman’s charming squint, for instance, begins to look like a moral migraine. Indeed, when he explodes in grief — not at the main event but, smartly, off to its side — he offers us the full horror of recognition the Greeks were after. What he recognizes, though, is not the tragedy of pride they prescribed but a tragedy of faith. Why is God most absent when you most need him?

Except as an interjection, God is also absent from the second monologue, “A Life,” in which Mr. Gyllenhaal plays Abe, another loving husband and recent father. But Mr. Payne’s play, an earlier version of which was performed as “The Art of Dying” in 2013, is structured as a competition between two possible tragedies instead of a straightforward retelling of one. At first the options alternate at a leisurely pace, but eventually they flicker so fast they blur.

Despite a shapeless green cardigan and black sweatpants, Mr. Gyllenhaal is unconvincing as a zhlub. Still, he is priceless with pressured dialogue. From a scenario that builds panic artificially, he mines surprisingly genuine humor, and eventually pathos, by focusing on Abe’s avoidance rather than expression of pain. Unable to communicate real feelings directly — he keeps telling us what he should have said as if that counted — he’s like a mouse in a maze of emotions, banging into walls and instantly changing course.

But if “A Life” (not to be confused with Adam Bock’s terrific play of the same name) suggests that failures of communication are the human condition and a source of unhappiness, it does not rise to the level of tragedy, modern or otherwise. What eventually happens, though sad, is common and natural, involving neither gross unfairness nor a meaningful challenge to faith.

It may be that Mr. Payne, who played the role in the 2013 production, was too close to the material to let it go where it needed to. (He has said that the story is somewhat autobiographical.) Still, as he did in “Constellations,” which posited an ever-branching multiverse of outcomes to a basic romantic premise, he finds ingenious ways to let structure compensate for character development. Here, the converging plot shows us just how much stuff — failure and redemption, delusion and emergency — gets funneled into a life, and how little control we have over any of it.

I’m not sure that adds up to much, and it seems to me that Ms. Cracknell, whose pacing and use of the stage are otherwise superbly delicate, may have been compensating for that when she appended a schmaltzy (albeit effective) coda.

But even if “A Life” is a bit of a comedown from “Sea Wall,” the two make smart companions. Certainly they are a model of showbiz synergy; the two actors are currently appearing together in the Netflix movie “Velvet Buzzsaw,” and Mr. Gyllenhaal previously starred in “Constellations” on Broadway.

The monologues also speak to each other. Though they were written independently — “Sea Wall” originated at the Bush Theater in London in 2008 — the Public’s production, marking the New York premiere of the combo platter, makes it seem as if they were designed to be bookends. Certainly the performances give you plenty to ponder in showing how we now read life, with or without fate, as everyone’s tragedy.