A mighty sigh — equal parts frustration and resignation — seems to animate “Hillary and Clinton,” Lucas Hnath’s piquant, slender new play about … well, it’s about exactly what, and whom, its title suggests. This production, which opened on Thursday night at the Golden Theater under the suave direction of Joe Mantello, is indeed a portrait of a marriage between two extremely well-known American politicians.

As for that propulsive sigh, it emanates from the title character called Hillary, who spends the surprisingly airy 90 minutes of this show in what might be called a state of angry wistfulness. It is our very good fortune that Hillary is portrayed by Laurie Metcalf, an actress who does being thwarted better than anyone.

And make no mistake. Though “Hillary and Clinton” features an excellent John Lithgow as the male half of this power couple, Mr. Hnath’s latest offering is ultimately all about Hillary. It is asking us to see the world through the eyes of a woman who ostensibly has all the right stuff to be president and yet is never allowed to win.

Staged in an earlier version in Chicago in April 2016, when it seemed likely that the real Mrs. Clinton would be the next resident of the White House, “Hillary and Clinton” has acquired a fresh topicality since her loss in that year’s presidential election to Donald J. Trump. You can feel the audience at the Golden nodding in collective agreement when Mr. Lithgow’s Bill Clinton — in a New Hampshire hotel room during the 2008 Democratic primary — explains the importance of grabbing the electorate by their hearts, not their minds.

“People don’t vote with their brain,” he says. “They don’t, even people who think they do, don’t. It’s never not emotional.” He continues: “Feelings — people think you don’t have them.”

The bone-tired, exasperated expression on Ms. Metcalf’s face at that moment suggests that Hillary has been living with such observations for way too long. And that if a person hears comments like that about herself often enough, she may begin to wonder what her real feelings are.

That’s a tricky state of mind for any performer to convey, and especially tricky if the character being portrayed is as well known — and as regularly parsed by pundits and plebeians alike — as the real Mrs. Clinton. Mr. Hnath’s play doesn’t presume to be an authoritative view of the woman behind the mask, or even of the mask itself.

Instead — and this is what makes this play something more than a receptacle for recycled observations about its famous subjects — “Hillary and Clinton” strips its protagonist down to her most ordinary self. And it invites us to look at her with the easy familiarity with which we might regard someone living next door, or in our own family. Or even our very selves, as we could be in an alternative universe, such as the one this play presents.

That’s the sort of leap of imagination that Mr. Hnath made in his superb “A Doll’s House, Part 2,” (2017), which envisioned the life of Nora Helmer after she walked out on her husband in Ibsen’s epochal drama. Nora was portrayed by Ms. Metcalf, who won a Tony for that performance.

It is not a criticism to say that Ms. Metcalf’s Hillary looks and sounds a lot like her Nora, even if in this case she’s wearing sweatpants and fleeces (Rita Ryack did the costumes) instead of a corset and floor-sweeping skirts. Ms. Metcalf becomes other people not by putting on disguises. 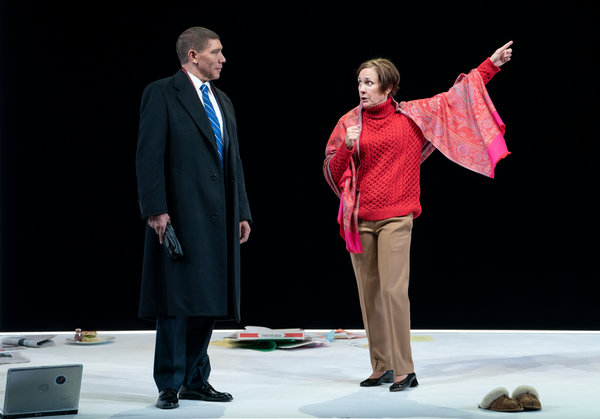 Instead, she turns her own distinctive face and form into a polished, utterly transparent magnifying glass for the — you should pardon the word — feelings that define the character she’s playing. It is appropriate that she makes her entrance in “Hillary and Clinton” as herself, more or less, while the house lights are still up.

She strolls in from the wings, acknowledges the audience casually and notices that her microphone stand lacks a microphone. She shakes her head with the irritation of someone who might have expected this and schleps the stand offstage, to return with a hand mic to address the audience.

This throwaway vignette is the perfect prologue to what follows. Our heroine — this Laurie/Hillary amalgam — begins her time in our company by dealing with an obstacle. She is here to speak, yet she is denied the means of amplifying her voice.

Tossing a coin while delivering a Tom Stoppard-esque meditation on chance and causality, this woman makes it clear that what we will be observing is not intended as a simulacrum of reality past or present. We should instead pretend, she says, “that light years away from here on one of those other planet Earths that’s like this one but slightly different that there’s a woman named Hillary.”

That universe will be recognizable to anyone who has read insider campaign books like “Game Change” or even Mrs. Clinton’s autobiography. The play proper is set in a naked motel room (the set designer is Chloe Lamford), both the essence of blank anonymity and — it turns out (with some help from Hugh Vanstone’s lighting) — a threshold to the cosmos.

It is here that Hillary, who is convinced she’ll lose the forthcoming primary, discusses strategy with her campaign manager, Mark (a perfectly slobby Zak Orth), and a jeans-wearing Bill — who appears, in an inspired entrance, filling the doorway like a space-clogging behemoth out of Dr. Seuss.

There is a fourth character, too. His name is Barack (Peter Francis James, shiny with dangerously amiable professionalism), and he has an offer to make. (How Hillary transforms herself physically for this meeting, with a little help from Bill, is one of the slyly matter-of-fact bits of stagecraft with which the production abounds.)

Even though some of what happens here is pure fiction, I doubt you’ll be surprised by anything that’s said. The scenes between Hillary and Bill, in particular, feel like fairly obvious externalizations of common speculations about their prototypes’ relationship.

What gives these encounters poignancy is how Mr. Hnath and Mr. Mantello have recontextualized them as a sort of every marriage. Yes, this husband and wife are two major politicians discussing subjects that could determine the fates of nations.

But what we see, above all, is a garden-variety case of spousal codependency that is both rather touching and alarming. Petulant, self-absorbed and terrified of no longer being useful, Mr. Lithgow’s very funny, pathetic Bill is, in many ways, a thoroughly typical husband of his generation.

Hillary, who notes that even when they talk about her it’s still about Bill, says at one point, “I want to stay in this marriage because I want to stay in it, because I get more out of it than I lose — but Bill, every second that passes I see myself losing more than I gain.”

Ms. Metcalf brings an uncanny mix of sorrow, rage and wry fatalism to that declaration, and it thrums with the painful acknowledgment of a vast potential that will never be fully realized. This is Hillary’s life as it was, is and apparently ever will be, even in an alternative universe.