A caroling session in a melancholy key, Theater Latté Da’s “All is Calm: The Christmas Truce of 1914” is a World War I documentary musical describing a brief ceasefire.

In 1914, with the war just five months old, enlisted men on both sides emerged from their no-man’s-land trenches on Christmas Day to bury their dead and exchange small gifts. Also, they sang, and if you had been standing in the mud and the cold near Ypres, Belgium, you could have heard those voices joined in “Auld Lang Syne” before the shells began to wail again.

Theater Latté Da, a musical theater company based in Minneapolis, has been refilling this particular cup of kindness since 2007 before bringing it to the Sheen Center. On a mostly bare stage, dotted with packing crates and wreathed in haze, a chorus of ten men trade carols and popular songs in English, German and French. Occasionally one man will step forward and recite a short excerpt from a poem or a letter, the words bridging the 30-some songs. 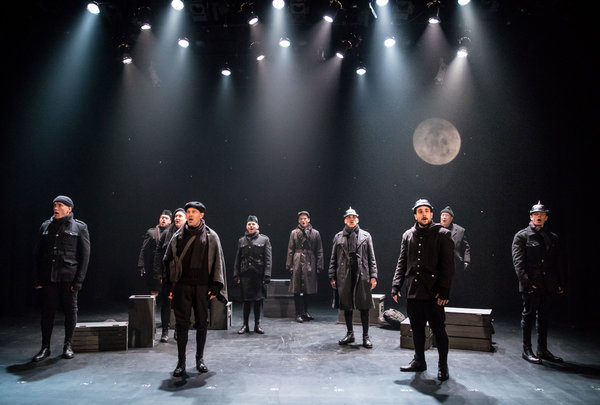 The arc of “All is Calm,” written and directed by Peter Rothstein, is coolly predictable, urging the men from enlistment to deployment to battle to détente to battle again, and the choice of song and excerpt aren’t so surprising either. You can count down the minutes until “It’s a Long Way to Tipperary” and “Keep the Home-Fires Burning” are heard, and of course the poets Wilfred Owen and Siegfried Sassoon put in appearances. (No Rupert Brooke? That is a surprise.)

More extraordinary is the beauty of the songs, shrewdly arranged by Erick Lichte and Timothy C. Takach. The first song, the traditional Scots ballad “Will Ye Go to Flanders,” begins with a tenor’s youthful peal. But from one verse to the next, lower voices enter, and the final, lowering notes are given over to the bass alone, suggesting how hope curdles into bleakness. Mr. Lichte and Mr. Takach are similarly clever in the ordering and intercutting of the songs. Near the end of “All Is Calm,” they allow “Auld Lang Syne” to cede to “We’re Here Because We’re Here,” a bitter musical joke: An ode to fellowship and a ditty to futility, they share the same tune.

The plangent tenors, lush baritones and rumbling basses are in excellent voice, and when they come together, the sensation is tremendous and the musical chill effect engulfing. I can’t have been the only person who spent the evening in a pretty much constant state of horripilation. The show is a lesson, if any were needed, in music as a vehicle for emotion. More than the story, it is the music that moves.

For a musical about a war — or more precisely, a caesura between hostilities — “All Is Calm” is a staunchly apolitical and warily genteel work. The descriptions of battle are restrained, the poetic excerpts polite. The Western Front seems a very decent sort of place, no blown out brains or trenchfoot here. The moral — that if we could only see each other as people, as singers in the same song, war would cease — is unimpeachable and very nice. But a century later, does heavenly peace feel any closer?

All Is Calm: The Christmas Truce of 1914