Have you met Vera Stark? Quick: There she is, in her pert maid’s uniform, running lines with her actress employer. There she is, just off the streetcar, swaying to the radio in dingy rented rooms. There she is, in black-and-white, a maid again, and much later, in bleary color, in a dress that looks like a Pucci self-detonated, singing “Fly Me to the Moon” on some forgotten talk show.

By the time the lights go up on Lynn Nottage’s 2011 satire, “By the Way, Meet Vera Stark,” revived by the Signature Theater Company, you’ll have spent nearly two and a half hours watching Vera. Or watching other characters watch her. You may not know her at all. In this barbed and booby-trapped comedy, that might be the point.

This is a play, often a very funny one, about representation and erasure. A decade ago, Ms. Nottage became fascinated by African-American film actresses of the 1930s and 1940s like Theresa Harris, Hattie McDaniel and Louise Beavers. They almost always played maids in parts that tended to confirm racial stereotypes; even racy, pre-Code Hollywood couldn’t imagine black women otherwise. She wondered who these actresses were and who they might have become if Hollywood had met them with the parts they deserved.

In Depression-era Hollywood, Vera (Jessica Frances Dukes) tidies up after Gloria (Jenni Barber), a kitten-voiced vulgarian billed as “America’s little sweetie-pie.” (Pay attention to the dialogue and you’ll learn they’re more than mistress and maid.) Vera is an actress, too. Or she would be if she could book an audition. As her roommate Lottie (Heather Alicia Simms, splendid as ever) says, “You gotta be high yella mellow or look like you crawled outta Mississippi cotton patch to get work in this rotten town.”

But Vera knows that Gloria is set to star in some magnolia-cluttered melodrama, which means slaves. And not just any slaves. “Slaves with lines,” she clarifies.

The first act, in which Vera angles for a role, is in the style of a screwball comedy. Though the director, Kamilah Forbes, doesn’t always nail the fouetté-on-a-dime rhythms and not all of the actors are on the same page (figuratively, mostly) it’s still a delight.

The second act, which shifts between a 2003 symposium, steeped in academese, and a 1973 talk show, steeped in gin, is more like a screwball tragedy. 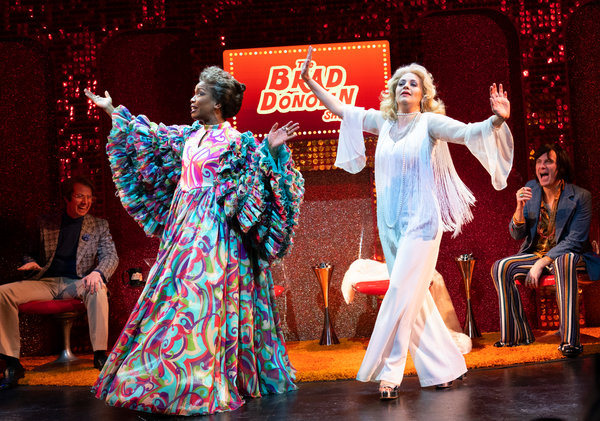 The play is fizzy and then it isn’t, because fizz goes flat when you really consider the careers that could have been and the blinkered ones that were. “If you wanna be in pictures, where you gonna begin, and where are you gonna end? Dig?” Leroy (Warner Miller), Vera’s jazzman beau, asks. Dug. Still digging.

“By the Way, Meet Vera Stark” premiered at Second Stage, then directed by Jo Bonney and starring Sanaa Lathan. Its concerns are not exactly dated. During the play, my mind flashed on all the conversations I’d had — and am still having — with actors about what it costs to play the terrorist, the prostitute, the drug dealer, the spitfire. And what it costs to turn the roles down.

For a play about a former maid, “Vera Stark” is not especially orderly. (In 2011, my colleague Ben Brantley called it “fitful” and that’s true, but as a woman who rarely bothers to make a bed, I can live with creases.) But it is such a good show — so clever, so playful, so keen to shapeshift and timeslip and whiz through half a dozen separate genres, and did you see Clint Ramos’s set and Dede M. Ayite’s costumes? — that I spent the next several days trying to figure out why it isn’t an absolutely great one.

Would I rank it with Ms. Nottage’s best plays, “Ruined,” say, or “Sweat,” Pulitzer Prize-winners both? Twist my arm: No, not quite.

Maybe that’s because “Vera Stark” depends on a kind of absence. We see Vera in various contexts — as servant, as friend, as aspiring actress and bantering back lot doll. In these scenes she mostly plays herself, except when she’s trying to charm a director who doesn’t want to hire a black woman unless he can see “100 years of oppression in the hunch of her shoulders.” But that self is fluid, mutable.

All of the female characters are. Lottie, a drab seamstress, used to do the shimmy on Broadway and before that she played Juliet. Vera’s other roommate, Anna Mae (Carra Patterson), softens her consonants and opens her vowels and passes as Brazilian. Gloria passes as a sweetie pie, and as other things, too. But Vera contains more multitudes than most. She keeps shifting out of focus.

It’s not that the performances aren’t vivid. Ms. Dukes, a sensation in “Bootycandy” and “Is God Is,” is crafty and dynamic. Ms. Barber, a former Glinda, is amusingly witchy, Ms. Patterson zingy, Ms. Simms a wry gift. (The men aren’t so bad themselves.) But these first-act characters have had to meet Hollywood’s male gaze with whatever it wanted to see. No wonder their edges go blurry.

The production tries to counter this. There are a few attempts to pinion Vera, but something in the character keeps sliding out and away. She’s too slippery for real tragedy, too evasive for farce. She’s the screen before the projector warms up, ready to show us whatever woman our imperfect hearts can dream.

By the Way, Meet Vera Stark