This weekend, two new series arrive on BBC iPlayer. One is American, the other Welsh; both feature strong female leads telling unfamiliar stories. Apart from that, they have absolutely nothing in common.

Awkwafina is Nora From Queens (released on Sunday, ★★★☆☆) stars the rapper, comedian and actress Awkwafina playing a semi-fictionalised version of herself growing up in New York when she was still plain old Nora Lum.

The basic details of the show are true to her real upbringing: Nora lives with her sparky grandmother (Lori Tan Chinn) and aloof father (BD Wong) in an apartment in the Queens district, where she is trying to work out what to do with her life.

The 27-year-old fictional Nora has a slacker mentality aligned to delusional job expectations conceived through a haze of weed and Red Bull. When her father walks into his study to find her asleep at his desk having used his computer to play Savage Valley all night, he calmly makes his feelings known:

Dad: I hate it when you use my computer.

Nora: Dad! We discussed this, you know what I’m using it for.

Nora: No! for sending emails and applying for jobs.

Nora: Editor-in-chief of the Miami Herald, music supervisor on Stranger Things, a Department of Justice attorney for the city of Trenton.

Dad [with a delivery as dry as the Arizona desert]: These are not viable jobs. 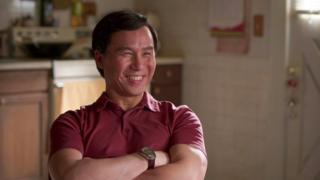 The show is amusing rather than funny unless non-PC grandma is involved, when everything moves up a notch. The scene in which she picks a fight with an elderly, snooty Korean woman in Atlantic City has the makings of a classic.

Insults are traded, racial stereotypes are exchanged, and iPads are forcibly unplugged as the two old ladies face-off with their respective OAP crews in support. Grandma is hauled away by security, only to meet Nora outside who has also been evicted.

Grandma: I got kicked out… after I picked a fight with some Korean bitches.

Nora: You tried to start an inter-Asian race war in there?

Grandma: Oh yeah, they make good soap operas I’ll give them that.

As anybody who has watched her 2012 YouTube hit song My Vag knows, Awkwafina is a genius. Or, at very least, extremely talented. She was great in Crazy Rich Asians (2018) and exceptional in The Farewell (2019) for which she became the first woman of Asian descent to win a Golden Globe for best actress. She has a screen presence like Keith Richards’ new teeth, which is to say, she really stands out.

All of which makes her new sitcom a little disappointing. Although her heightened-reality take on life growing up as an Asian American in New York feels fresh, the show as a whole is staid and traditional.

The jokes hit easy targets rather than revealing home truths in a script co-written by the actress who is operating in a zone so comfortable it’s akin to watching Lewis Hamilton race a bunch of kids in go-carts – he still looks great but it doesn’t exactly get your pulse racing. The show is OK, but Awkwafina is a lot better than that.

Hell on Wheels (released earlier this week, ★★★★☆) also boasts a charismatic female lead who, like Nora’s Grandma, doesn’t mind going toe-to-toe with anybody trying to score one over her. In fact, that’s what Kid Block spends most her time doing in this excellent documentary series about the rise-and-rise of Roller Derby as an international sport.

We are told Kid has achieved everything the sport has to offer, including representing England in two world cups. We meet her playing for the aptly named Tiger Bay Brawlers in Wales, a team she has re-joined as captain and coach after a successful spell with London Roller Derby, the top outfit in the country.

Kid is a leader from the bottom of her roller-skates to the tip of her crash-hat. She readily admits not all the team are besties, but they are a family, with a bond of love and loyalty. And they have a job to do, which is go from champions of Wales to the champions of Europe. It’s a big ask for a group who have experienced some crushing losses, but with Kid in charge anything is possible.

And so we follow the 5ft 11in Roller Derby star and her band of merry women on their quest for glory. That’s the premise anyway, a run-of-the-mill sports documentary.

Except, there is nothing run-of-the-mill about Kid or her team. They are billed in the opening credits as “misfits”, but as the cut-away mini-portraits of the main players makes plain, they are not outsiders at all, they are simply regular people trying to find a way through the complexities of modern life.

The players, not the game, are the real story, with the increasing popularity of Roller Derby as a major sport developed for and by women, a dramatic device for exploring the lives of Kid, Jen, Kim et al.

The balance between match coverage and personal profiles is well struck, with the dynamics within the team observed through filmed training sessions interlaced with pitch-side interviews.

The game looks brutal and confusing at times, but the basic rules are explained and re-explained each episode. From what I understand, Roller Derby matches are held on an indoor, wooden-floored court, and take place within a wide oval tramline.

Two teams of five on-court players have one designated individual whose job it is to lap their opponents as often as possible (a bit like rounders), while the other four try and block the attacker’s progress. Body slams, broken bones, and high-speed crashes ensue. It is the very definition of a full contact sport.

Off court is a different matter. Roller Derby has clearly nurtured an inclusive, supportive environment in which all are welcome. When the self-styled Nitro-Jen had a mental breakdown following years of being a successful chef, she emailed to join Tiger Bay Brawlers and asked if “being trans was a problem”. The response was “absolutely not a problem…you’d be more than welcome”. It changed her life.

In fact, Roller Derby appears to have come at just the right time for all the players as the Tiger Bay Brawlers push and shove their way to their dream of tournament glory. I’m not sure I’d become a season ticket holder, but if they make another series of Hell on Wheels I’ll be taking a front row seat.

Recent reviews by Will Gompertz:

NYFW: Despite the lack of shows, the glamour lived on
Food & Drink News