Upon arrival at the Greenwich House Theater to see “Freestyle Love Supreme,” the mostly improvised and entirely delightful hip-hop musical that opened there on Tuesday, you will be asked to turn off your phone and lock it in a Yondr pouch. There it will remain until an usher liberates it when the show is over, 75 minutes later.

This is not an act of random persnicketiness. Nor is it meant as insurance against the possibility of a free-range Patti LuPone showing up to tongue-lash you for texting or taking pictures during the performance. The six-man cast of “Freestyle” is too laid-back for that; the vibe is more rec room than star chamber.

You might think that’s true of any live show, but “Freestyle” makes the bargain more literal and thus the show more live. Its songs do not exist until, with your help, the performers create them before your ears.

To be clear, though each song’s content is improvised, the formats predate this run of performances, sometimes by years. Conceived by Anthony Veneziale and created with Lin-Manuel Miranda and Thomas Kail, “Freestyle” had its debut in 2003. When I first saw it a year later at Ars Nova — with a cast that included Mr. Miranda, using the hip-hop handle Lin-Man — some if not most of the current numbers were already part of the repertoire.

In one sequence I’ll call “Second Chance” (no titles are provided) Mr. Veneziale solicits from audience members stories of life events they wish they could do over. Having picked one, he and the crew proceed to create a mini-musical on the spot, first telling a comically exaggerated version of the volunteer’s story, then rewinding it back to the beginning before retelling it with a happier resolution. That much is unchanged.

The tale itself, though, is always new and always a matter of luck. At the show I attended, the early one on Saturday the story chosen was not, in truth, so fascinating: A woman trips while walking down Sixth Avenue on her birthday. I thought one of the other audience offerings, in which a woman falls into a Venetian canal, would have given Mr. Veneziale more to work with, but perhaps “Do I Hear a Waltz?” — which has exactly that plot — scared him off. 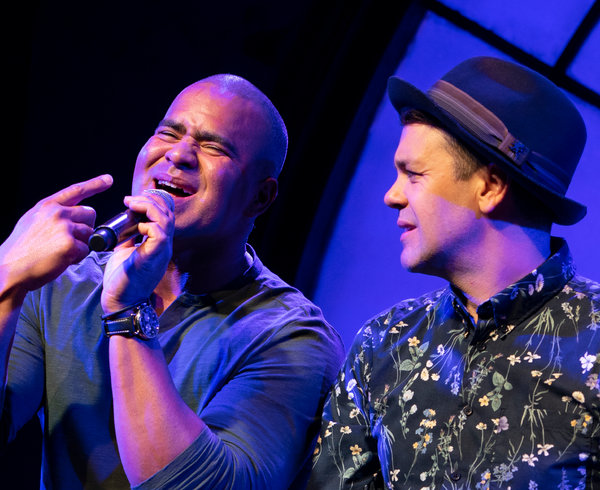 In any case, he and Utkarsh Ambudkar and the evening’s special guest, Christopher Jackson, subbing for the regular cast member Andrew Bancroft as part of the show’s ongoing rotation, turned this banal slice of life into something hilarious, absurd and also moral: an oratorio on the theme of “digital health.” In their version, the woman falls because she is too busy Instagramming her birthday to enjoy it live with the relatives actually accompanying her. Also too busy to notice potholes.

Like everything in “Freestyle,” this story is told to a nonstop beat that sometimes had me worrying if the performers could keep up. After all, they were not merely speaking but also spitting constant rhymes (“mumps” and “humps”) and off-rhymes (“pencil” and “suspenseful”) that worked nearly as effectively as those in traditional, prefab songs.

They are also improvising the staging. The most extraordinary part of “Second Chance” is the rewind, which like the similar section of the song “Satisfied” in “Hamilton” runs all the physical action you’ve just seen in reverse. But there is this difference: In “Freestyle” the performers can rely only on their instantaneous muscle memory.

If the words and action are unfailingly surprising, the music is more predictable, mostly bluesy chords that allow the improvisers to spin out noodles of melody. (On Saturday, the rappers were accompanied on keyboards by Arthur Lewis and Ian Weinberger, while the astonishing Chris Sullivan provided additional sound effects with just mouth and microphone.) Even so, when the lyrics and melody land in the same emotional place at the same moment, the sensation of great depth is like that of any good song, multiplied here by the difficulty factor.

It’s useless to point out highlights that will never recur but, for me, “Freestyle” paradoxically soared when it took a breather from its giddy high spirits. A number I’ll call “True” spins what Mr. Veneziale tells us are completely factual reminiscences from a word suggested by the audience. The word “Mom” prompted Mr. Jackson, an original “Freestyle” performer and more recently a star of “Hamilton,” to thank his for not killing him despite his terrible misbehavior as a youngster; Mr. Lewis sang an impromptu lament for his, who recently died.

Under the direction of Mr. Kail, who also directed “Hamilton,” “Freestyle” is loose enough to permit such moments — or maybe smart enough to head directly toward them. And yet it is also, within the limits of improv, extremely tight, so that you never worry you will wind up watching the cast fall into a pothole (or canal), unless intentionally.

This is partly the result of an ideal mix of personality types: Mr. Veneziale warmly upbeat, Mr. Ambudkar snarky-nerdy, Mr. Sullivan impish and explosive, Mr. Jackson joyful yet commanding. (Other guest stars scheduled to appear before the mostly sold-out show closes on March 3 include James Monroe Iglehart, Daveed Diggs and Lin-Man himself.)

But the real secret of the show is the cast’s commitment to deep attentiveness. Words and phrases called out by the audience, even those you thought had been discarded, whirl back into the narrative repeatedly, with all the punch of reprises. You have been heard!

So when the usher unlocks your phone from the pouch, you may feel as I did: strangely uninterested in turning it on. That’s digital health indeed.