“Greek,” a cheeky, winking, surprisingly affecting 1988 opera by Mark-Anthony Turnage playing at the Brooklyn Academy of Music through Sunday, tells a brutal story. An updating of Sophocles’s “Oedipus Rex,” it’s about — I don’t think this will be a spoiler — a man who accidentally stumbles into killing his father and marrying his mother, sins that cause a plague and are expiated only when he gouges out his eyes and exiles himself.

[Our critics choose the best classical music of 2018.]

What’s surprising is how not brutal Mr. Turnage’s score is. Sly and slithering, a lot is like lounge music gone astray or filtered through a bad dream: fried, droopy, twisty. Writing it when he was only in his late 20s, Mr. Turnage didn’t make the mistake of a lot of first-time opera composers in overloading the instrumentation. The artfully speech-like, even blunt vocal lines don’t fight to be heard; often the effect is nearly akin to a cappella, with the small orchestra, conducted by Stuart Stratford, most prominent in wry punctuation and interstitial commentary.

“Greek,” with a libretto adapted from Steven Berkoff’s play of the same name, turns Oedipus into Eddy — insecure and covering it up with desperate bravado, and played at the Brooklyn Academy by Alex Otterburn with quiet charisma and a doughy, swiftly changeable face. Looking like a stunned, pasty Eminem in track suit and closely cropped peroxide-blond hair, Mr. Otterburn’s Eddy longs for a life fancier than that of his pub-going parents (Susan Bullock and Andrew Shore, who, with Allison Cook, also double and triple in piquant minor roles). 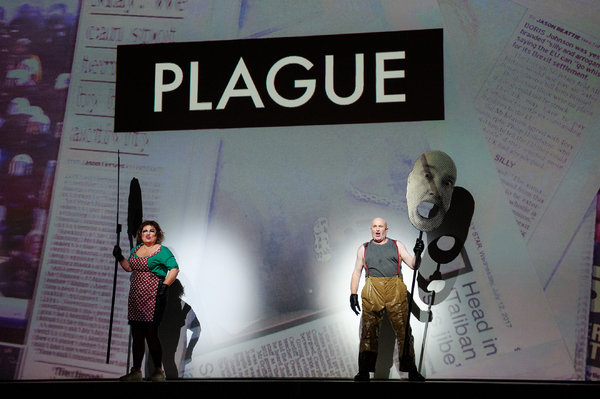 Ribald more than savage, sarcastic more than explosive, the piece gives the sense that those aspirations are at the heart of Eddy’s — and society’s — downfall. “Greek” takes aim at the 1980s greed-is-good government of Margaret Thatcher, who was the British prime minister when the piece had its premiere. But the work’s social commentary is more satirical and world-weary than ruthless or crushing. (Compare the lightness of its depiction of working-class suffering with, say, Berg’s “Wozzeck.”)

Indeed, for all its lewdness, it can seem a little larky. That’s why Joe Hill-Gibbins’s stark, raucous staging, produced by Scottish Opera and Opera Ventures, is so welcome, adding to the piece’s heft and punch. The action is pressed forward to a narrow sliver of stage, over which a white wall looms — and sometimes forlornly rotates to suggest the passage of space and time.

The wall also becomes a projection screen for some of the production’s most memorably visceral images, including a living one that succinctly, unsettlingly and spectacularly conjures the rot at the heart of the work’s world. A recurring sight over the performance is the kind of food and condiments you would find at a greasy spoon — canned beans, mayonnaise, wan slices of tomato. But by the end, in keeping with an opera that’s more subtle than it seems at first glance, ketchup transforms from a nasty sight gag to the use you might expect for Eddy’s act of self-violence, taking on an unexpected tragic grandeur.

And despite the brief, insolent coda, what stays with you from the final sequence is the slow, frieze-like procession that leads the blinded Eddy offstage: an image of love and community, as well as sadness.