You’re serving a long sentence, and if you want freedom, you’ll need to take matters into your own hands. It’s the plot of “Escape at Dannemora,” and it’s also the experience of watching it.

The escape of the convicted murderers Richard Matt and David Sweat from the Clinton Correctional Facility in 2015, aided by the prison employee Joyce Mitchell, captured the imagination because of its sensationalistic elements: a desperate manhunt in the forests and fields of upstate New York that ended in violent death, accompanied by lurid reports of prison sex. It was the stuff great B movies are made of.

That’s not what the writers Brett Johnson, Michael Tolkin and Jerry Stahl and the director Ben Stiller have made in “Escape at Dannemora,” a seven-hour mini-series that begins Sunday on Showtime. (Johnson and Tolkin are credited as the show’s creators.) It doesn’t have the energy or excitement of a B picture, though it does, despite its general somberness, manage to feel exploitative.

Set mostly inside the state penitentiary where Matt (Benicio Del Toro) and Sweat (Paul Dano) plan their escape and have furtive couplings with the discontented Mitchell (a thoroughly deglamorized Patricia Arquette), their supervisor in the prison tailor shop, “Dannemora” is a series of misses — a not very thrilling thriller, a social-problem story that lacks conviction, a satire without teeth.

A lot of conscientious effort has gone into reconstructing events and rendering the small-town settings, and “Dannemora” works sufficiently well as a ticktock account of the story. Del Toro and especially Dano are good in the prison scenes, conveying Matt’s relaxed mastery of the system and Sweat’s quiet anguish. Stiller, directing his first full-on drama, presents the routines and milieus of the prison convincingly, though he indulges in the occasional superfluous tracking shot or odd camera angle. 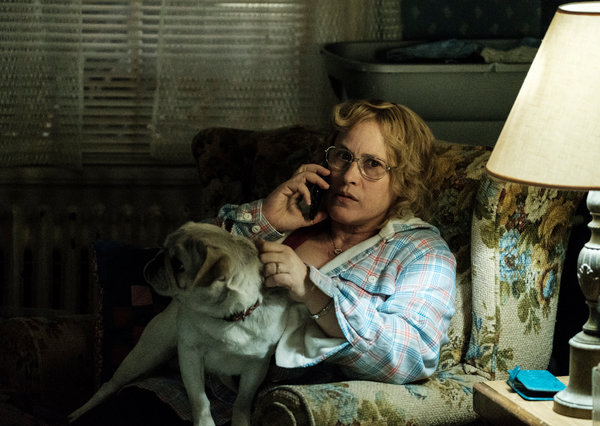 Less credible is the show’s treatment of Mitchell and her loyal husband, Lyle (Eric Lange). The show tries to put her actions in a context of rural economic malaise and male entitlement, but it mostly condescends to her, and Lyle comes off as a hapless bumpkin. (Matt and Sweat, by comparison, are soulful poètes maudits.) Whether on their own or at Stiller’s direction, both Arquette and Lange adopt exaggerated, “Fargo”-style accents that are a major distraction.

There’s an overall sense of self-consciousness to “Dannemora,” of reining in — as if the creative team were unwilling (or unable) to exploit the story’s naturally pulpy essence, but also were unwilling to fully explore its possibilities for uncomfortable humor. (Tolkin, author of the screenplays for “The Player” and “The New Age,” is no stranger to satire.) Stiller supplies a lot of handsome images, but the series doesn’t supply a point of view, beyond a curious propensity to emulate a 1970s television crime movie in its fonts, music and cinematography.

The atmosphere of artifice is compounded by a full episode that flashes back — at great length and in grisly detail — to show us why Matt and Sweat ended up in the penitentiary (and how Mitchell ended up working there). It’s an art-house touch, and it’s also a narrative and thematic expedience: After spending most of its time depicting the escapees in a generally sympathetic light, the series pauses to remind us, “Hey, they’re killers,” in time for the sad finale.

Watching the series in one sitting, as a critic is likely to do, is daunting, but it might be the better approach. In a seven-hour session, the series takes on an epic quality, keeping you interested on a narrative level at least; week to week, the individual episodes won’t necessarily deliver enough to make you want to come back. “Dannemora,” like the escape it portrays, is a meticulously planned and executed operation that doesn’t go anywhere.

Escape at Dannemora
Sunday on Showtime