How we characterize our parents when they aren’t around can reveal a lot about us. The choreographer David Parsons is the child, creatively speaking, of Paul Taylor, who died last year. Now he has chosen to honor his mentor by including “Runes,” a 1975 Taylor piece that Mr. Parsons performed while a member of the Taylor troupe, on the Parsons Dance program that opened at the Joyce Theater on Tuesday.

“Runes” is very different from the other pieces on the program. Mr. Parsons is essentially a people pleaser, as Taylor could sometimes be. But “Runes” — with its modernist music, ritualistic gestures and slow pacing — is Taylor at his most Martha Graham-like, Taylor reaching back to his own artistic parent.

Under the low moon of Jennifer Tipton’s lighting, a man lies on the ground. Others scamper around him, laying on hands and making odd, insistent shapes with their limbs. They might be trying to resurrect him. By the end of the dance, he rises.

What happens between is equally strange: solos and duets, performed as if around a prehistoric campfire; bodies grafted together like gnarled trees, decapitations. This could be ridiculous, but somehow, through Taylor’s craft and, even more, his imagination, the freaky spider poses and V-shaped salutations to the sky acquire meaning and force. The secret writing really does cast a spell. 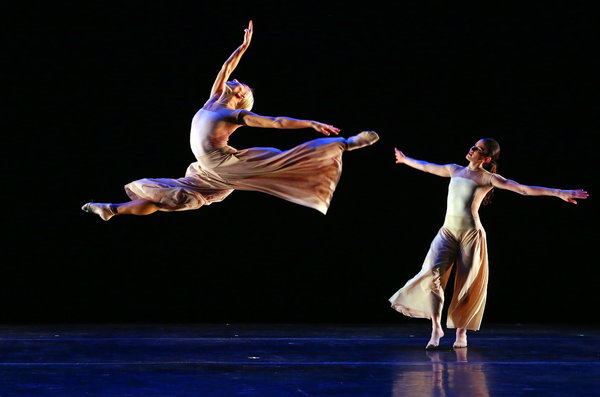 In his program note about “Runes,” Mr. Parsons calls all this “simply and beautifully about the moon, the stars, and the rituals that all people experience.” As a reduction of “Runes,” this is off, but tellingly so: Mr. Parsons’s dances, at their worst and at their best, actually are that simple.

It’s true of “Caught,” his never-fail signature piece, in which strobe lights and timing allow a dancer (on Tuesday, the near-perfect Zoey Anderson) to walk on air. And it’s true, to more soporific effect, of the program’s opener, “Round My World” (2012), with its pretty variations on arcs and circles.

Being a popular artist need not mean being simple. Trey McIntyre, in some ways a kindred spirit of Mr. Parsons’s, is one of the best choreographers around at drawing out the emotional complexity of pop music. But “Eight Women,” his new piece for Parsons Dance, is a disappointment.

The music is six choice tracks by Aretha Franklin. Silvie Road’s costumes put the eight-member cast — which includes four men — in pants wide enough to be skirt-like, and Mr. McIntyre’s approach to gender is gently fluid and unconventional. “(You Make Me Feel Like) A Natural Woman” is a duet between ladies.

Without miming the lyrics or telling his own stories, Mr. McIntyre finds a balance between easy flow and inner accents. It’s all very nice, and the agile, ever-affable Parsons dancers perform it as if in a warm bath. What’s missing, fatally, is anything to match the soul-stirring voice of Aretha Franklin.

Mr. Parsons’s 1990 “Nascimento,” by contrast, finds the right language for the lulling tones of Milton Nascimento, the Brazilian artist who provided the score. There’s a section in the middle that’s remarkably still — boldly simple and beautiful — but most of the dance goes down like a caipirinha. If that’s what you’re in the mood for, Mr. Parsons is your man.

Parsons Dance
Through May 26 at the Joyce Theater, Manhattan; joyce.org.