If there are two dancers onstage, or 6, or 25, can those dancers be said to be performing solos?

That’s the kind of Zen paradox that ran through the mind-expanding dances that Merce Cunningham made over more than 60 years. And on Tuesday, the day that would have been his 100th birthday, his work raised that question again in the biggest of many centennial events: “Night of 100 Solos.”

Actually, there were more than 100, since the event happened not just in New York, but also in London and Los Angeles, each with a cast of 25 performing a 90-minute selection of material, accompanied by live music. Each show was different, since they were all Events in the special Cunningham sense, abiding by his practice of chopping up his dances and reshuffling them, often with overlap, for novel occasions, with new sets and scores — another of the many radical ways he opened up ideas of how things go together in time and space. 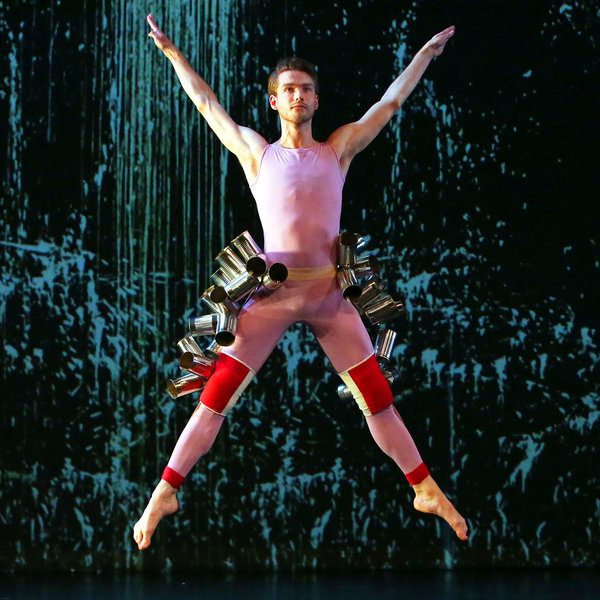 Besides the scale and trans-Atlantic reach, the most significant twist here was in the casting. Although the Events were organized by former members of the Cunningham company, none of the dancers belonged to that elite tribe, though many boasted other elite pedigrees (Alvin Ailey, Trisha Brown). This casting foregrounded the question that’s been in the air since Cunningham’s death in 2009 and the disbanding of his company two years later: How does his work live on?

[Read about how dancers prepared and watch a few rehearse.]

“So far, so good” has been the cheering answer, an impression that these Events largely reinforced. Thanks to time zones and technology, it was possible to experience the Events as I did — watching the London show over live stream, taking in the New York one at the Brooklyn Academy of Music, then tuning in to Los Angeles online. (The complete footage is streaming on the Cunningham Trust website for the next three months.)

Altogether, it was an extraordinary feast of movement invention, what Cunningham called “an adventure in attention.” But each seemed to fluctuate between being another instance of that uniquely thrilling occasion, a Cunningham Event, and a version in which people tried very hard to accomplish that uniquely difficult feat. I felt that fluctuation most strongly in Brooklyn, perhaps because those dancers were in the flesh but more likely because I was much more familiar with them from other contexts.

PeiJu Chien-Pott moved like what she is, an excellent Martha Graham dancer; the tension in her body and face kept exemplifying what Cunningham style isn’t. Sara Mearns, the try-everything New York City Ballet star, struggled valiantly to discover the Cunningham principle of stillness in motion; unfocused at first, she seemed to find a new center deeper within herself each time she reappeared.

Shayla-Vie Jenkins, formerly with the Bill T. Jones/Arnie Zane Dance Company, had that lucid Cunningham serenity, her own beautiful version of it, all the way through. As a black woman, and not the only one onstage, she helped give her Event a greater diversity than the Cunningham company ever had. All the Events shared this welcome broadening, even while the mix of stylistic backgrounds, as jumbled as an all-star game, worked against Cunningham’s special kind of coherence.

In a sense, spreading Events across geography is only exaggerating a common effect of Cunningham theater, in which dancers moving next to one another at vastly disparate speeds might as well be in different time zones. Such independence and simultaneity make sense of a title like “Night of 100 Solos” even when dancers touch one another or light on fleeting unison. Whenever the Cunningham company performed, a shared style held this complex world together, like gravity. That force was missing in these Events.

In any Cunningham Event, connoisseurs can identify fragments — some of which recurred across these three shows — but, despite the incredible diversity, almost anyone can distinguish just about everything as recognizably Cunningham. It’s in the DNA of the choreography, which can steal your breath in the tiniest details. If the way it was put together here, following Cunningham procedures, sometimes seemed to miss the master’s hand, that’s a reminder of how much magic was in the man, rather than the methods. What’s left in the material is more than enough.

Night of 100 Solos
Performed on Tuesday at the Brooklyn Academy of Music.