I was writing the menu for our lunch service at Prune a few weeks ago and kept crossing out then penciling back in a classic: quiche Lorraine. I just wasn’t quite sure where we stood, as a nation, on the subject these days.

In the ’80s, “quiche eater” was a casual slur to describe feminists and liberals, effeminates and intellectuals alike, prompting T-shirt sloganism and tote-bag activism in response. Grown men wore T-shirts emblazoned with “Real Men Eat Anything” the way they now wear ones that say “The Future Is Female.” You don’t want to go through the considerable work of putting together a warm, trembling, fragrant quiche Lorraine — with a perfect flaky crust and a silken custard streaked with Gruyère and salt pork — to discover that while you were downstairs in the prep kitchen, quiche had been conscripted into some new culture war.

Some say it’s really quite simple to make; the phrase “set and forget” is used often. Maybe for some, but while I was putting our lunch menu into place, I made three quiches a day, and I, myself, never achieved anything worth crowing about with such a laissez-faire approach. But when I took all the pains with every step — researching the distinction between Lorraine and Alsacienne (it’s onion); keeping the dough cool and working it with a fork so my hands didn’t melt the fat while blending; blind-baking the shell; raising and reducing the temperature of the oven; grating the Gruyère on the medium teardrops of a box grater — it produced this stunner. It wobbles in the center, and the crust is crisp yet tender and the extra step of blanching the pancetta sands down the domineering top note of the pork and yields an elegant bottom one instead. The pinch of nutmeg is fleeting, but so captivating on first bite, you want to chase after it. Every human working in the restaurant from ages 19 to 53 couldn’t stop commenting on its perfection. It was, like, totally, the platonic ideal. 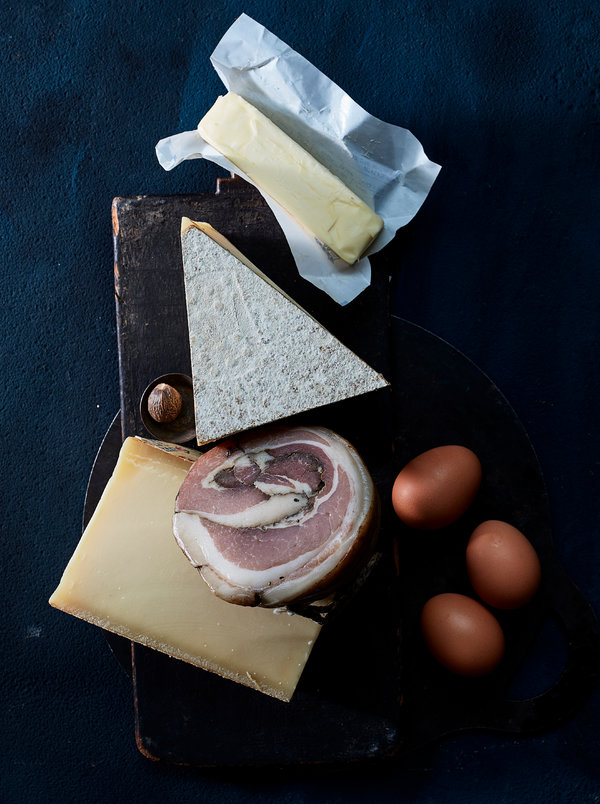 You could make it easier on yourself with packaged dough, I guess, because the custard here is going to do most of the heavy lifting anyway. But if you enjoy working with your hands as much as I do, the sensory and tactile pleasures are immense. Dipping your measuring cup down into the cool silky flour bin. Moving back and forth to the refrigerator with an evenly buttered fluted pan, keeping the thick, milky film of butter from melting and turning greasy. Pouring in the heavy beans and noticing how they come out of the oven at half the weight they went in with; marveling at the difference when you cool your tart shell elevated on a baker’s rack instead of carelessly letting it get soggy by placing it directly on your cutting board — it’s all just work, like laying stone, but I can really vouch for its pleasures.

And that’s the thing about stupid quiche. Rubbery, cold, thick, heavy, soggy, banal, underwhelming, ridiculous quiche. It’s only so if you don’t attend to the work of it — if you set it and forget it. I am lucky in that I like work more than I like food. For a chef this may sound pitiable, but happily, restaurant life is about work, about making the food, not consuming it. Every dish we cook we send out to someone else. It’s as if we are midwives to children we will not hold. We may or may not love children, but we love midwifery. We love the boiling of the water and the getting of the towels and the wiping down the surfaces.

I know that there is very little argument left for doing it the hard way, and I might be its last champion on earth. My slogans are the worst: The harder the better! If it’s easy; it stinks! But I pull out the aphorisms that worked for me when I was 19 and hope they still have traction with the 19-year-old who is standing across from me at the prep table. If all the cream rises to the top, what happens to the milk? “What does the man do before enlightenment” I ask, quoting some Zen proverb from my own youth. He chops wood and hauls water! And what does he do after enlightenment? He chops wood and hauls water.

I’m not sure this lands. Are we laying stone or building a cathedral, people? I’m making the case for building the tart, step by arduous step, stone by stone, with a song in your heart. I go full-bore about the bricklayers, that ultracheesy motivational story, about some visitors who arrive in a foreign city and meet a man on his knees with his masonry tools. He’s sweating and grimacing, and they ask him what he’s doing, and he says, “I am laying stone.” And they see another man on his knees up ahead with his masonry tools, and he says: “I’m building a wall; I got a wife and kids and bills to pay, man!” And they come upon the next guy on his knees with his masonry tools, and he is whistling and aglow, with a song in his heart, and he says: “Me? I’m building a cathedral.” And there you have it, the quiche, now drafted into the service of my own cultural war against shortcuts and half-measures — while back upstairs the guests have arrived for lunch, and, it turns out, they order the quiche.