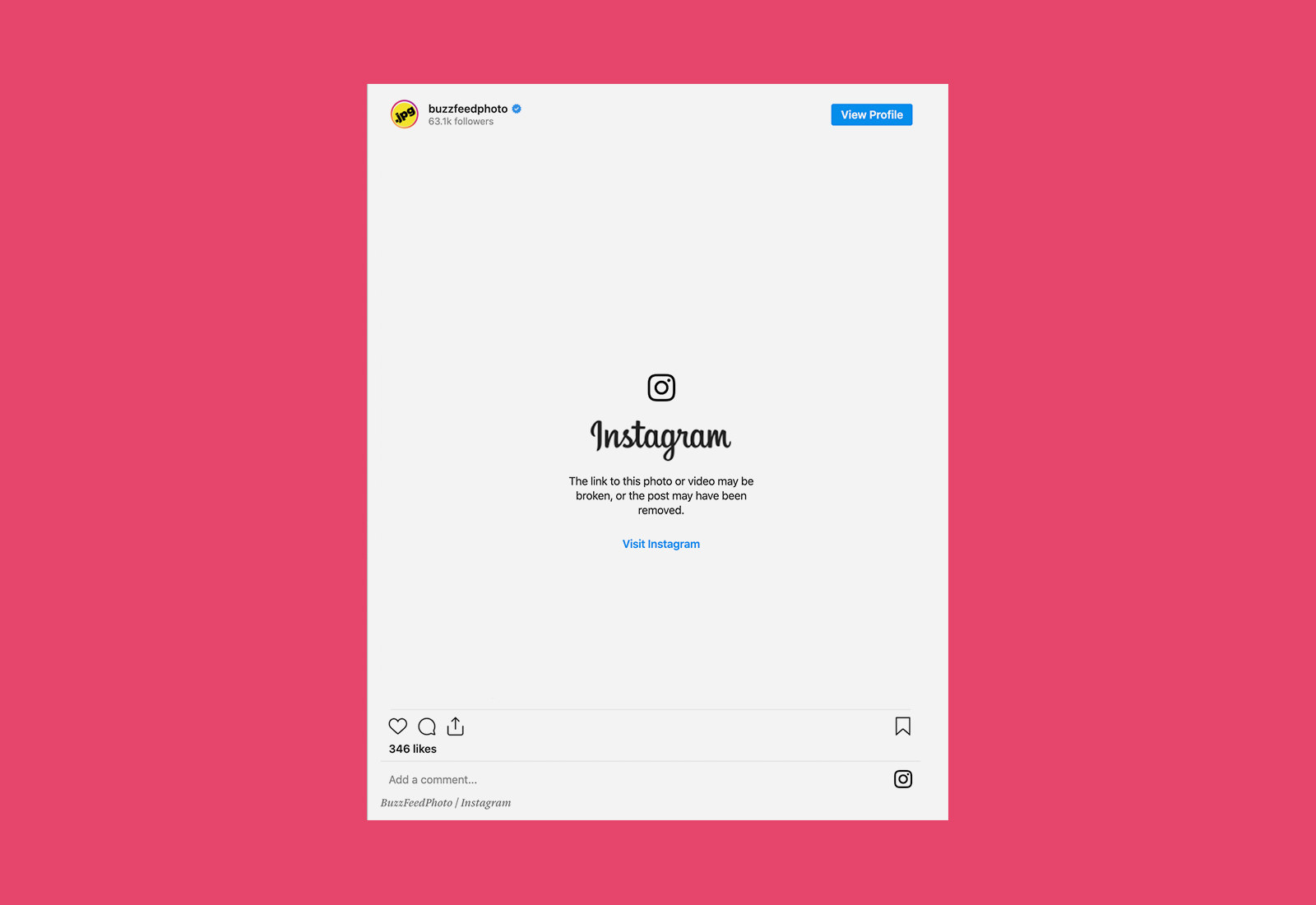 While I was scrolling through the images of banana bread and babies, one image stood out — a notification from a photographer that they were taking their account private to avoid media companies embedding their images in their stories.

And then another notification, saying the same thing.

According to the ruling, as soon as you post them to the ’gram, your images aren’t exactly your own. And some of those people who make a living in photography are pissed.

With more than a billion active users, Instagram is the world’s largest visual platform, and it is vitally important to professional photographers. Photo editors and creatives use Instagram to find new photographers to assign work to, influencers and ad agencies use it to market products, and photographers use it to showcase their work. The new ruling presents photographers on Instagram with a stark choice: popularity or copyright.

The dispute started with this 2016 Mashable post on women photographers. Mashable reached out to photographer Stephanie Sinclair, who declined to license one of her images to the publication for their offered rate of $50. Sinclair’s work, which often documents human rights issues, has frequently appeared in the New York Times and National Geographic and is highly regarded by her peers. After she declined to license the image, Mashable embedded it in the story anyway. So, she sued them.

But Mashable won by arguing it had the right under Instagram’s terms and conditions. As Judge Wood put it in her ruling: “The user who initially uploaded the content has already granted Instagram the authority to sublicense the use of ‘public’ content to users who share it.”

A lawyer for Sinclair, who was unavailable to comment, told BuzzFeed News that the ruling still left Instagram with options. “We believe it is important that Instagram consider changing its platform to match what YouTube does regarding the option to turn embedding on and off,” said James Bartolomei. “This meaningful change could give professionals control over their copyrighted photos and retain valuable licensing rights that are part of the bundle of rights under the Copyright Act.” Bartolomei added that Sinclair was considering filing an appeal.

Asked about that suggestion, a spokesperson for Facebook, the parent company of Instagram, told BuzzFeed News, “While we have nothing specific to share at the moment, we’re always looking at ways we can improve our service. In accordance with our platform policies, we ask that people gain all necessary rights from others before sharing their content.”

Embedding is taking a post from Instagram (or another social media platform) and putting it directly into a story on another website. It shows the full frame of the post, and disappears if the original poster removes it from their feed. You’ve likely seen this function many times, including on BuzzFeed News. It looks like this:

For most people who use the platform, embedding isn’t a huge deal. It can even be seen as a positive, allowing for off-platform visibility and new followers. However, some professional photographers view embeds as a threat to a viable stream of income. A photographer can earn hundreds, if not thousands, of dollars on licensing images. Many professionals work with agencies who manage their archives and police the misuse of images online — except for embeds, which are technically a legal use of the images, even if the photographer doesn’t agree or get paid for it.

Nevertheless, embeds are useful for the media — they allow for everything from memes to breaking news to be easily shown in a way that credits the original source. But it doesn’t mean the source of the photo is getting paid. And the only way to avoid having images embedded, at the moment, is to make an account private — which is a step some professional photographers have taken in the wake of the ruling.

“This whole issue with the embeds directly impacts my ability to control where my work is published. I’ve had a few cases where publications have embedded my pictures and that’s a direct hit against my bottom line. They’re getting work for free that I should’ve been able to license,” said M. Scott Brauer, a photographer based in Boston who does both commercial and editorial work.

Nancy Del Pizzo, the outside counsel for BuzzFeed, said, “If you’re a photographer and you’re going to be putting your stuff up, and you want to preserve your rights, you ought to care about the terms and conditions. It’s part of the due diligence of being a photographer.”

Professional photographers worry that the lack of an opt-out feature for embeds prevents them from using Instagram not only as a marketing tool, but as a platform to interact with an audience. By making their accounts private, there is a barrier of entry to discovery of new photos and photographers.

“Ultimately, we hope that Instagram will change their functionality so that embedding can be blocked on professional and public accounts or on an image-by-image basis,” Alicia Calzada, the deputy general counsel for the National Press Photographers Association, told BuzzFeed News.

There is still a chance that the rules will change. Not only is Sinclair considering an appeal, but online copyright is a hot topic in legal circles. Just two years ago, a judge ruled that media companies could be held liable for embedding images on Twitter. That case did not explicitly address the question of licensing, instead focusing on the infringement of display rights, but the ruling sent a chill through newsrooms that rely on a steady supply of user-generated content to fill their pages, and set a precedent for the current case between Sinclair and Mashable.

And the shaky foundation of photo embedding is not lost on the photo industry.

“This is definitely a case to watch. Copyright law is fluid, it’s changing because of the internet, there are more technicalities that just weren’t around previously, and right now, the circuits are split on some issues,” said Del Pizzo. “And they will remain that way unless legislators change the law.” ●