Those last two attributes were more than enough for Johnna — and for the viewers of “Love After Lockup,” the WE TV show on which Garrett was one of the first-season stars.

Equal parts dating show and slice-of-life documentary, “Love After Lockup” follows six couples — one con and one “non-con,” in the shorthand of the producers — as they contemplate weddings and post-release living arrangements. The show was the fastest-growing new cable series for 2018 and returns for a second season on Dec. 7. In many ways, its popularity hinges on our seemingly bottomless fascination with all things prison-related, even as the couples themselves try to move on and put all of that jailhouse nonsense behind them.

When “Love After Lockup” debuted last January, it entered a crowded field of prison-themed reality programs. Over the past decade, there have been shows about jails (“Jail,” “60 Days In”) and county jails (“Lockup: County Jails”); maximum security prisons (“Hard Time”) and megajails (“Louis Theroux: Miami Mega Jail”); female inmates (“Girls Incarcerated”) and their kids (“Born Behind Bars”); hardened lifers (“Lockdown”) and newbie guards (“Behind Bars: Rookie Year”). “Locked Up Abroad,” on Nat Geo, is still going strong, 12 seasons in. Even MSNBC’s “Lockup” franchise, which ran for 25 seasons and spawned a half dozen spinoffs before being canceled in 2017, is ubiquitous on Netflix. 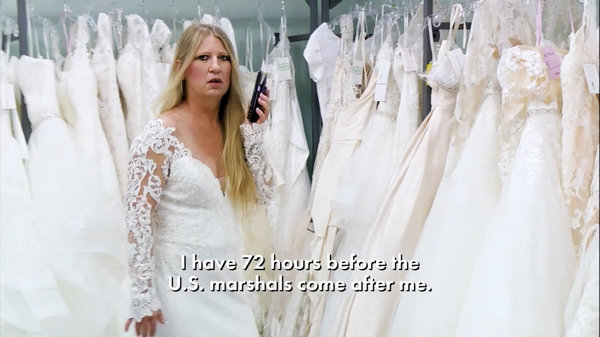 The popularity of these shows, for both producers and viewers, isn’t tough to figure out: They’re cheap to produce (no expensive sets to build, or professional actors to pay), and promise both voyeuristic thrills (violent prison riots! Blurred-out body cavity searches!) and reassuring morality tales where no felon goes unpunished, and then some.

Elizabeth Barfoot Christian, a professor of media and communication at Louisiana College who has written about prison reality shows, believes that many of them, like “Louisiana Lockdown,” which was set in nearby Angola Prison, feed into and even promote negative stereotypes about the incarcerated. “To me, it’s no accident that that show was on ‘Animal Planet,’” she said.

But Christian also notes that many of the newer criminal justice-themed programs, from dramas (Netflix’s “Orange Is the New Black”) to podcasts (“Serial,” Christian’s own “Telling Lives”), humanize the characters in ways that previous shows did not. One possible reason: The United States has the highest incarceration rate in the world (655 inmates for every 100,000 people, according to the World Prison Brief, a database maintained by the Institute for Criminal Policy Research at Birkbeck, University of London), which means that there’s a good chance viewers know someone who’s in prison, or has been. “There’s a sense that this could be my brother,” she said. “This could be my father, but for not getting caught.”

“Love After Lockup” is part of this larger trend toward kinder, gentler prison shows, with its sympathetic cons and lovestruck non-cons. The focus on families and friendships over rap sheets has resonated with viewers. The show’s target audience of women ages 25 to 54 nearly doubled over the course of the season; the series finale, “Prison Cells to Wedding Bells,” drew nearly 725,000 viewers.

And at first glance, the show seems very similar to a batch of other prison-based relationship shows, like Lifetime’s “Prison Wives Club” and Investigation Discovery’s “Prison Wives.” But the show has one key attribute the others lack: On “Love After Lockup,” the inmates actually get out (or at least most do). And unlike other prison reality shows, which rarely leave the lockups and tend to focus on the most unsavory aspects of prison life, “Love After Lockup” is all about, well, love or what passes for it under extraordinary circumstances like these. Will Garrett still want to marry Johnna, once he’s experienced the charms of Florida’s strip clubs? Will Andrea’s friends still support her after they discover that her fiancé has been in prison for the past 18 years, not, as she has told them, in Canada?

“I think the couples are all very relatable,” said Kate Farrell, one of the show’s executive producers. “They have to work out how they’re going to live together. They look at wedding dresses, and buy cars. But still, in the back of your mind you’re thinking, this person was in prison for 18 years.”

The series began life in 2016 at WE TV’s annual “pitch fest,” a mandatory event in which company employees split up into 10-person teams and brainstorm ideas for new shows. The winning pitch featured elements of some of the biggest shows on WE TV, whose bread and butter are reality series aimed at women ages 25 to 54: unrealistic wives-to-be (“Bridezillas”); unlikely couples (“Marriage Boot Camp”); and personal transformations (“Mama June: From Not to Hot”).

As with a lot of reality shows, “Love After Lockup” lives or dies with the cast. To assemble the six couples, the producers looked at online support groups (Facebook’s “Prison Wives of Florida Inmates”) and Instagram hashtags. According to Farrell, they were looking for non-cons who had compelling stories, wanted to get married (like, now), and were currently dating incarcerated felons, but not excessively violent ones. “No murderers, no rapists,” she said.

The first season was marked by unwise acts (over a period of three years, Scott sends Lizzie, one of the show’s two female inmates, $90,000, which she spends on meth and heroin, among other things) and threats from jealous lovers (“I will hurt a chick,” says Andrea, “and I say that in the name of Jesus Christ, amen”). There are questions from nosy friends (“Has he hurt any children?”) and inquisitive family members (“Have you ever gotten shanked?”).

This season stars four new couples, as well as two couples from last season whose romances were stymied by delayed prison release dates. One of the newcomers, Caitlin, is a 32-year-old administrative assistant in Washington who falls in love with Matt, a 28-year-old inmate she met through a “strictly platonic” Craigslist ad. Most of Caitlin’s family doesn’t know about her new beau, who’s in prison for possession of a firearm, stolen property and eluding the police. And although their prison meetings were limited to four visits — albeit all-day ones — she doesn’t see her relationship as all that different from other couples.

“We dated,” Caitlin said in a phone interview. “Maybe not to society’s norms. But we spent five months communicating day in and day out. We took time to get to know each other.”

“I get that it might not look normal to everybody else,” she conceded.

And who says normal is necessarily all that great? Farrell points out that prisoners can spend more time wooing the person on the outside. “They have a lot of time to write letters. Whereas someone that you or I might date, who has a job and responsibilities, they’re not sitting there going, oh, I think I’ll write Kate a poem today.”

One of the two returning non-cons is Angela, 45, who was stood up by her boyfriend Tony on his supposed release date at the end of the first season, which left Angela wondering if she had been played. That’s another not-uncommon element of the show: For many prison couples, it’s the partner on the outside who’s sweating things out, hoping their lover on the inside is telling the truth. “He is a manipulator,” Angela said by phone from her home in Mississippi.

And yet, there’s something about the guy that charms. “One of the sweetest things he ever sent me was a half dozen roses he made out of toilet tissue, and colored with Kool-Aid from prison,” she said.

In the end, the producers insist, the series is really all about love stories and second chances. “Sometimes you do something stupid and you get a bad break,” said Marc Juris, president of WE TV. “But that doesn’t mean you’re not a good person and you don’t deserve love.”

And that sentiment is one reason the non-cons say that they sign up for a show like this. It’s certainly not for all the abuse they receive on social media from strangers calling them idiots and losers and worse. “I did not do the show for fame and fortune,” Angela said. “I did it because people who are incarcerated are so stigmatized by society. I had an opportunity to share my story on television, and let others know that, hey, it’s O.K. to be in love with an inmate. They’re people too.”