Late US rapper Pop Smoke, who was shot and killed this year, has landed a posthumous UK number one album.

He becomes the first solo artist to achieve the feat, with the only other act being Warrington band Viola Beach.

The rapper, real name Bashar Barakah Jackson, was killed in a suspected robbery in February at the age of 20.

His record, Shoot For The Stars, Aim For The Moon, landed on top spot on Friday, 12 weeks after making its debut on the chart at number two.

Most (97%) of his album sales this week came via streaming platforms.

“This number one cements Pop Smoke’s legacy in the UK and the promise he had to be one of the greats,” said Jade Bradshaw, from his UK label Polydor Records.

“This is a bittersweet moment but it is an honour to be part of this project with Steven, Shiv & our colleagues at Republic [Records]”.

“London was a special place for Pop – it was a city that he connected with and was drawn to,” added Steven Victor, head of the artist’s US label, Victor Victor. “A place that inspired him but also gave him a sense of peace.”

On the singles chart, another rising US star, 24kGoldn, earned his first number one on Friday, with Mood ft. Iann Dior.

Having held the runners-up slot for two weeks, the rapper and singer overtook Cardi B & Megan Thee Stallion’s WAP. 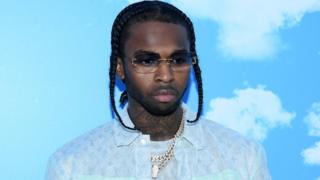 Pop Smoke had a breakout hit with Welcome to the Party in 2019, which led to the New Yorker being singled out as an artist to watch by BBC R1Xtra on the station’s Hot For 2020 list.

He had been co-signed by 50 Cent, who executive-produced his album.

The Brooklyn artist often worked with East London producer 808Melo, helping to give him a sound more familiar to London – where he knew UK rap acts like Dave, AJ Tracey, Fredo, and Skepta.

Following his death, around the release of his posthumous album this summer, his fans told Radio 1 Newsbeat the rapper had “something special”.

“He was definitely destined for great things,” one fan, Malluchi Boateng, said.

“If you look at what he did in about 14 months of his career, most artists do that in five or six years.”

Prosecutors say he was killed during a robbery at the Hollywood Hills home where he was staying at the start of the year.

The two men charged with his murder could face life in jail without the chance of being released if they are convicted.