The United States Air Force and Navy appear to be closing in on a partial solution to a complicated set of problems that have for years caused pilots to experience adverse physiological symptoms midair, endangering them and the aircraft. Officials from both services said that by early 2019 they will replace faulty oxygen-supply systems with new hardware and software in their T-6 Texan trainer aircraft. They are also continuing to study how pilots in their trainer and combat aircraft are being affected by hypoxia — a physiological condition caused by low levels of oxygen in the bloodstream that can lead to a lack of concentration and muscle control, inability to perform delicate tasks and ultimately loss of consciousness.

Oxygen-deprivation and cockpit-pressurization problems have afflicted trainer and top-line aircraft in the Navy and the Air Force — including the F-22 Raptor, the F-35A Joint Strike Fighter, the A-10 Thunderbolt, the T-45 Goshawk trainer and F/A-18 Hornet — for at least a decade. Until recently, the source of these episodes mystified military officials. Because so many different aircraft were affected, the services didn’t think they were being caused by one specific problem. In his testimony to the House Armed Services Tactical Air and Land Forces Subcommittee in February, Lt. Gen. Mark Nowland, the Air Force deputy chief of staff for operations, said that “there is no single root cause tied to a manufacturing or design defect that would explain multiple physiological event incidents across airframes or within a specific airframe.” Lawmakers, frustrated with the lack of progress made by the services, criticized Nowland for his remarks. “I could not be more disappointed by your presentation,” said Representative Michael R. Turner, an Ohio Republican and the subcommittee chairman. “There is something wrong with the systems that these pilots are relying on for their lives.” Many junior pilots, meanwhile, felt that their leaders were ignoring or playing down the episodes, because they couldn’t replicate the problem or find an easy fix.

[Get a weekly roundup of Times coverage of war delivered to your inbox. Sign up here.]

Finally, under pressure from Congress to change its approach, the Air Force completed a six-month study and announced in September that it had figured out the root cause of these physiological episodes: fluctuating concentrations of oxygen tied to the oxygen-distribution system. In conjunction with the Navy, the service is developing a new oxygen concentrator for the aircraft most commonly associated with the episodes, the T-6 trainer. Air Force pilots of the trainer aircraft reported an average of eight hypoxia-related episodes per month between February and July 2018, Aviation Week reported in August.

The Air Force’s entire F-22 Raptor fleet was grounded for four months in 2011 after 12 separate incidents in which pilots of the $143 million fighter jet experienced a lack of breathable oxygen. One of those resulted in a fatal crash. By July 2012, the total number of incidents had climbed to 36. In the Navy, the greatest impact has been on its standard fighter-bomber, the F/A-18 Hornet. One report said that between 2010 and 2017, its F/A-18 Hornet pilots reported nearly 500 “physiological episodes” in flight and indicated that such problems caused four fatal Hornet crashes.

Similarly worrisome issues struck the military’s F-35 Joint Strike Fighter program, in which the Defense Department is expected to invest $1 trillion by 2030. In May and June 2017, five F-35A pilots assigned to Luke Air Force Base in Arizona reported “hypoxia-like symptoms” while flying but managed to land their planes safely. All F-35A flights at that base were temporarily halted as a result. 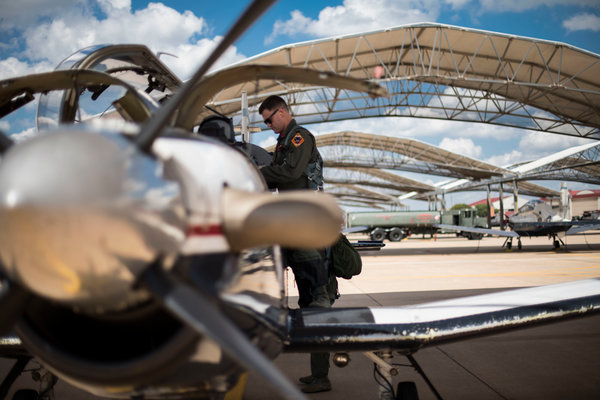 Earlier in 2017, problems with the Navy’s T-45 jet caused a near revolt of instructor pilots, whose jobs are to train student aviators. On March 31, 2017, T-45 instructors canceled 51 of 129 scheduled training flights because of safety concerns about physiological episodes they had experienced in flight. The Navy responded by having senior aviators visit the three T-45 training squadrons to assure instructors and students that they were taking the problems seriously. According to an official report, those visits were “not well received at any of the three sites.” The instructors cited what they perceived as a lack of attention on the part of Navy leadership in recognizing the seriousness of the problems and a lack of urgency in correcting them. Not long after, the Navy’s Pacific Fleet set these physiological episodes as its top aviation safety priority and said it would address the problem regardless of cost or resources required. Both the Navy and Air Force have appointed high-ranking officers to lead teams to identify causes and implement fixes.

Officials from both services have pointed to two main causes of these events: flaws in the system that provides oxygenated air for pilots to breathe, and an environmental-control system that is unable to maintain the appropriate air pressure inside the cockpit. The former has resulted in episodes of hypoxia. The latter caused some pilots to suffer decompression sickness, comparable to what deep-sea divers can experience if they do not surface slowly enough for nitrogen to be removed from their bloodstream and expelled through their lungs.

In earlier decades, fighter jets carried liquid oxygen onboard for pilots flying at high altitudes. But over the past 20 years, both services have been transitioning to a system that collects air from outside the aircraft and filters nitrogen from it until it is safely breathable. The change was an attractive safety feature because liquid oxygen can be a fire hazard, and the new system offered, in theory, a functionally limitless supply of air. But the newer system also lacked sensors to monitor the air quality and had no alarm that could alert pilots to any problems. After Navy pilots reported increased physiological problems as these oxygen concentrators aged, the devices were taken apart and examined. Sailors who work on the planes found a surprising amount of wear inside, including contamination from engine exhaust. This led Navy officials to recommend that certain oxygen-system parts be regularly inspected regardless of their performance and to redesign the internal nitrogen filter.

While hypoxia is problematic, both the Air Force and the Navy point to uncontrolled cockpit-pressurization changes as a potentially greater threat to pilots than the air they breathe. Just like commercial airliners, warplanes are usually pressurized to match a constant altitude inside the aircraft no matter how high they fly. The higher up in the atmosphere a plane flies, the lower the outside air pressure is — at a certain point very low air pressures can have a negative effect on the human body, so maintaining a more or less constant pressure inside the plane is important for the health of those inside. “When you’re flying in an airliner at 38,000 feet, it pressurizes somewhere between 8,000 and 10,000 feet,” said Brig. Gen. Edward L. Vaughan, who leads the Air Force’s physiological-episodes action team in the Pentagon. “Same thing with our military aircraft. The difference is military aircraft can change altitude very rapidly on purpose,” in instances where warplanes regularly train in dodging missiles or during an aerial battle.

Cockpit pressure can sometimes swing up or down by 2,000 feet without warning, and this is a prime suspect in causing decompression sickness. “We know that in most pilots on most days, that oscillation doesn’t result in any symptoms,” Vaughan said. “But some pilots on some days, those oscillations under a given condition result in these symptoms.”

The Navy has introduced a number of measures to combat the problems with cockpit pressurization, including outfitting F/A-18 pilots with commercially available smartwatches that contain barometric sensors to alert them of pressurization problems; this was necessary because the plane’s built-in altimeter gauge is in a position that makes it difficult to read. The Navy also started deploying hyperbaric chambers operated by specially trained medics onboard the aircraft carriers U.S.S. George H.W. Bush and U.S.S. Carl Vinson in January 2017, so that pilots could receive treatment after landing on the ship instead of having to be medically evacuated to a chamber ashore.

According to Vaughan, the Air Force has rebuilt spare oxygen concentrators for its T-6 trainer aircraft and is installing a redesigned model that incorporates sensors to alert pilots of certain problems like insufficient oxygen or particle contamination and will include software that can be rewritten as needed based on data it collects. The new design has been completed and is being delivered to T-6 squadrons. Vaughan’s team works in tandem with a similar Navy team led by Read Adm. Fredrick R. Luchtman, whom the Navy declined to make available for an interview. Neither service said whether it had a plan to address hypoxia-related symptoms in other aircraft.

John Ismay is a staff writer who covers armed conflict for The New York Times Magazine. He is based in Washington.