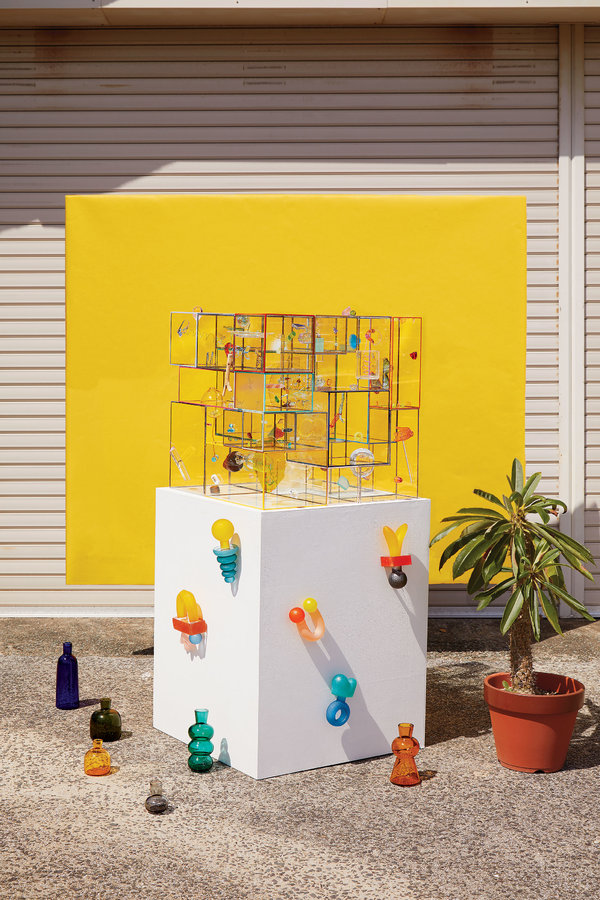 Glass melts above 2,000 degrees Fahrenheit, at which point it resembles sun-bright lava with a taffylike pull — and often necessitates that its handlers work with a partner, lest one of them get scorched. Fourteen years ago, at Tama Art University in Tokyo, Baku Takahashi and Tomoko Wada paired up in an introductory glass blowing class; they’re still working together today, driven by a shared belief, as Wada wrote in an email, “that glass itself, with its transparency and color, is alluring, so we treat it with importance.” Now 32 and married, they’re considered two of the most exciting glass artists in Japan.

After graduating and assisting artisans for a few years, Takahashi and Wada rejected Tokyo’s thriving maker scene for Takahashi’s hometown in Fukuoka Prefecture on the country’s southernmost main island, which is home to rocky beaches and citrus-fruit forests whose mandarin-orange hues are reflected in his work. Here, out of a 1,100-square-foot studio, the duo makes sculptures, wall hangings, pendants and small objects that are distinct to each artist but alike in their focus on what Wada calls “spatiality.” For more than a decade, she’s been iterating upon her “Apartment” series, for which she fills and stacks glass boxes of various sizes with glinting balls of rainbow-hued glass, dried flowers or lengths of organdy, as if rearranging the rooms of an abstract dollhouse. But the specific contents are not really the point: Within these realms, it’s “the empty space that is most distinctive,” she says.

It’s fitting, then, that her partner aims to fill the void: Takahashi often produces the fragile flotsam that Wada places inside the cubes. In his own practice, he’s similarly focused on claiming space, sculpting forms he hopes the world hasn’t seen before, even if they are loosely born of a childhood spent reading anime and playing video games. Takahashi melts, cools, fuses and polishes glass shapes in cartoonish shades (royal purple, aquamarine) to create crayon-box-size statues that resemble, say, an Olympic torch from the year 2080 or a religious totem from a dreamed-up pacifist cult.

As obsessed as Wada and Takahashi are with space, though, their artistic motivation ultimately lies with their chosen material. In Japan, artisans have blown glass for centuries, though many modern techniques were introduced by the Portuguese and the Dutch starting in the 16th century. In the last century, glass blowing has often been seen more as craft than art, perhaps because the process of shaping the material was historically “used for the manufacturing of products,” Takahashi says. “We look to fuse old-fashioned values with new ideas.”

Which is not to say that the duo is interested in crafting rarefied works; instead — as with the democratization of crafts such as indigo dying and paper making throughout Japan — they’re trying to convince a new generation that glass blowing, too, merits innovation. Takahashi’s figurines were first shown a couple years ago at Playmountain, a design boutique in Harajuku; last spring, he exhibited works at a gallery inside Beams, a men’s wear store, just before Wada took her turn showing at Playmountain. In 2016, the artists launched a collaborative project called Toumei (“transparency” in English) that comprises vases, light fixtures, earrings and drinking glasses in bulbous shapes and muted tones. Sold online, these objects speak to her love of emptiness, his love of form — and their experience living together amid all their glassware. “We felt the need to create pieces that could be used,” Wada says. “It’s necessary for all creations — including artwork — to be considered from various viewpoints.” — KURT SOLLER

Jin Kay, Dylan Cao and Huy Luong all have distinct childhood memories of their mothers on their way to work. Kay, who grew up in 1990s South Korea, can still see the silk blouses and pencil skirts his mother, a doctor, would wear under her lab coat. Cao and Luong, meanwhile, spent their early years in Vietnam, where it was common to see women’s skirts hiked up during their daily commute on motorbike. Over a decade later, these images inspired the trio to launch Commission, their own line of women’s wear, out of a small Manhattan studio. “It’s a tongue-in-cheek reinvention of our parents’ clothes, which were themselves interpretations of Western style codes, so it’s all full circle,” says Cao, who designs along with Kay, while Luong focuses on branding. Between them, the men have done stints at Gucci, Prabal Gurung, 3.1 Phillip Lim and Michael Kors, but they were eager to build something that felt personal. And though the clothes are indeed a shout-out to cool Asian girls, the founders made a conscious decision to eschew aesthetic stereotypes: Instead, the line consists of ’80s-leaning tailored separates set apart by subtle detailing — a gauzy floral dress with a center slit (pictured above right), a pale blue button-up with a cinched waist meant to create a tucked-in look. Some pieces riff on the idea of a busy woman balancing work and home, as with a two-button suit jacket with a strap sewn onto the shoulder, from which hangs not a purse but a punkish chain, making the piece just as suitable for the office as for a motorcycle-powered escape. — AHNNA LEE

In Hampshire, a Food-Focused Hotel

England has long had an abundance of five-star, shades-of-stone country hotels, but apart from a few notable exceptions — Angela Hartnett’s Lime Wood, Raymond Blanc’s Belmond Le Manoir aux Quat’Saisons — food has rarely been the main draw. “You’d go for the scenic walks or the spa,” says the award-winning chef Skye Gyngell, who’s hoping to make another exception of Heckfield Place, a new 45-bedroom hotel in a Georgian estate in Hampshire, a one-hour drive southwest from London. Most of the produce used at the property’s two restaurants — the lively Marle and the more intimate Hearth, which is reserved for hotel guests — is grown on its own 438-acre grounds, which include a farm (set to be biodynamic-certified by 2021), walled gardens and an orchard of pear, apple, quince and plum trees. Gyngell, best known as the executive chef of the lauded London restaurant Spring, takes a minimalist approach to cooking: “I always ask myself, ‘What can I leave out of this? What doesn’t it need?’” she says. A recent meal at Marle included a rainbow of raw radishes, beets and carrots served with celery yogurt; beef fillet with golden girolles and a sweet-marjoram-accented sauce; and — the chef’s favorite — a bright mulberry, honey and custard tart. Hearth, meanwhile, named for its limestone fireplace, serves a prix fixe menu that changes daily. Both restaurants, along with the rest of the hotel interiors, were designed by the Ilse Crawford alum Ben Thompson, who opted for green-veined marble tables, midcentury oak chairs and, instead of table vases, decorative gourds. heckfieldplace.com — KATE MAXWELL

A Table Made From Basic Shapes

Postmodernism, the cheeky 1980s design and architecture movement that arose as a reaction to minimalism, may now be reviled in certain quarters, but it left behind some fine ideas. Here, the floridly decorative neo-Classical Tinkertoy aesthetic of Robert Venturi and the Memphis Group gives way to a more elemental and elegant form, as reimagined by Syrette Lew of the Brooklyn-based studio Moving Mountains. This low table, assembled from kindergarten-basic shapes in cornflower blue and pale carrot-colored concrete and joined with pinkish bronze, may seem at first glance precarious — why does the cylinder not just roll away and the whole thing collapse? — but it is a meticulous feat of engineering and restraint in a vivid yet understated palette: an eloquent symbol of how the past can gracefully morph into the future. Price on request, mvngmtns.com. — NANCY HASS

Coco Chanel was 18 when she first saw a Coromandel screen in an antiques shop. Such inlaid ebony-lacquer folding panels — made during China’s Kangxi period at the end of the 17th century and later named for the trading ports along the Indian coast from which they were often sent to Europe — became a lifelong obsession. By the time she died, she’d come to own more than 30 pieces (they still line the walls of her preserved Paris apartment at 31 rue Cambon), which were fashioned by incising scenes of the royal court and the natural world into the hand-rubbed finish with a technique called kuan cai; artisans then added bits of gold, jade and mother-of-pearl. This brooch, with birds and leaves crafted from garnets, diamonds, coral and red-orange spinels, evokes these screens, with an additional twinkling tribute to the iconic 20th-century designer: Tucked into the tableau is Chanel’s signature flower, the camellia. Price on request, (800) 550-0005. — N.H.

8 Boxy Carryalls to Hold Everything 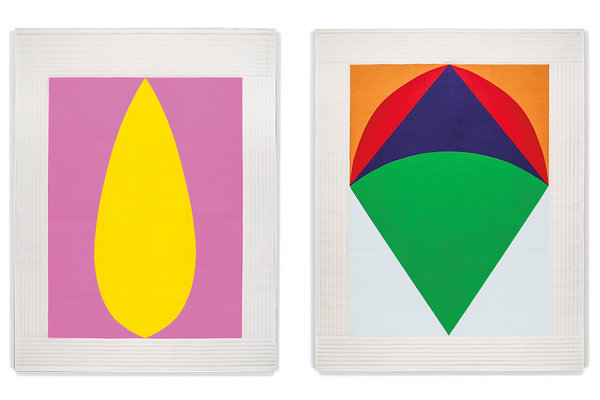 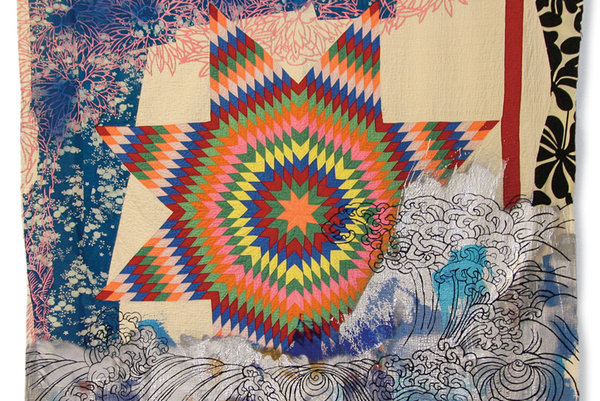