There are many Claires. There is World War II Claire, bloody in her military nurse’s apron. There is Scottish Claire, back in 1743, snug in warm woolens and riding clothes. And then there’s the most photogenic one of all: French Claire, stylish in a Dior-inspired bar suit and black platter hat, with basket panniers and pads underneath the silk skirt to give her that 18th-century look.

Caitriona Balfe, who plays Claire on the Starz time-travel drama “Outlander,” can barely contain herself when she encounters this dress on Anna Sawyer, the New York Comic Con cosplayer wearing it.

“Oh my goodness!” Balfe blurted as she reached to stroke Sawyer’s sleeves. “That is incredible. Amazing. Did you make the hat, too? I’m so blown away.”

We’re standing in a back corner of the show floor at the Jacob Javits Convention Center, where at least 400 ardent fans are still lingering in an area meant to seat maybe 100 people. Tara Bennett, who’s conducting interviews for the SYFY Channel Live stage, tells me that she warned her bosses to expect this huge turnout. 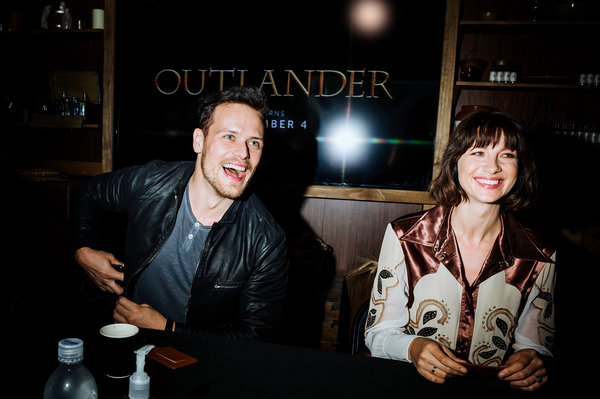 “The core four of ‘Outlander’ are like the Beatles of New York Comic Con,” she says.

It seems like a hyperbolic comparison — until you spend an afternoon tagging along with Balfe and three castmates, Sam Heughan (Jamie), Sophie Skelton (Brianna) and Richard Rankin (Roger), on a rare trip to New York to promote Season 4 of “Outlander,” which begins Sunday.

[Need a refresher on where Season 3 of “Outlander” left off? Here’s what to remember.]

While shows like “The Walking Dead,” another Comic Con favorite, inspire large, passionate followings, “Outlander” devotees turn the festivities into a cross between Beatlemania and a family reunion. Diana Gabaldon, the author of the novels that inspired the show, is the exalted matriarch (referred to as “Herself”), but the showrunner, Ronald D. Moore, and his wife, the costume designer Terry Dresbach, are the mom and pop of “Outlander” world.

“I love your wife!” one excited fan shouts at Moore.

Outside hundreds more fans have been waiting for hours in an intermittent drizzle for a chance to attend a cast autograph session. Only 100 will get in, so everyone has a decision to make: Stay and hope for the best, or head over to try to claim a seat for the later cast panel at Madison Square Garden’s 5,600-capacity Hulu Theater? “Biggest room I’ve ever been in,” an awed Moore said.

Why is “Outlander” now drawing some of the biggest crowds in its history? Scarcity, for one thing. Seasons 3 and 4 of this hit Starz show were shot virtually back to back, leaving the cast sequestered in Scotland and then South Africa for the better part of two years. The fans were getting really … thirsty. “We don’t make it easy for them,” Heughan said.

The fan base has also been steadily growing and broadening, now drawing 5.8 million multiplatform viewers per episode, according to recent figures from Starz. Contrary to its reputation as being a romance show for women — it’s actually a mishmash of sci-fi, fantasy, adventure and historical fiction — “Outlander” has an audience that is now about 35 percent male.

There’s also plenty of anticipation for the coming season, which turns another perception — that this is a quintessentially Scottish show — on its head: Jamie and Claire had arrived on American shores in 1767.

This expands the show’s stranger-in-a-strange-land premise to explore what it means to be American immigrants, as the newcomers try to maintain roots in the old world and coexist with indigenous neighbors. The new focus requires wading into charged issues like slavery (which the couple also confronted last season in Jamaica) and the Native American genocide, as well as period racism and xenophobia.

Since “Outlander” is a non-SAG production, the show was prevented from casting Native Americans. So the producers flew a group of First Nation actors from Canada and also consulted with a Cherokee leader in North Carolina about the tribe’s culture and concerns about onscreen portrayals.

“You need to have that dialogue,” said Maril Davis, an executive producer. “There are certain things from Diana’s books that we kind of felt we had to do, because if you don’t stay in a certain narrative, you lose your way. So there are certain depictions that are one-sided, but in our own way we tried to balance it a bit more and hopefully show the other side without really hanging a lantern on it.”

As a woman caught out of time, Claire is the audience surrogate, and Moore tried to keep the audience viewpoint in mind during upsetting moments like “when Claire and Jamie arrive at the plantation,” he said.

At the same time, the characters have learned in previous seasons that they can’t change history, no matter how outraged they (and we) might be about it.

“Claire knows what the basic history is,” Moore said. “And she knows it’s a pointless exercise to try to change something that was such a massive social question that it resulted in a civil war.”

Back at the Javits Center, one of the wartime Claires — a woman named Joan Perrin — manages to sidle up to Balfe and hand her an assortment of little gift bags tagged for each of the cast members. It’s not the first time she’s done this.

“[Perrin] has given us bracelets quite a lot,” Rankin says. “And I actually usually wear them!”

Later Rankin spots Perrin outside and delights her by lifting his arm to show her that he’s wearing the bracelet. “We have a lot of respect for the time and the effort the fans put in,” he said. “ They make us these baked goods, or these beautifully bound books, or dolls. Have you seen the fan-made cross-stitch of Claire’s red dress?”

He searches his phone and produces an image of the needlework. “I think it took [Beth Elahmar] nearly six-and-a-half months, and now she’s raffling it off for charity.” Elahmar said her pieces have raised nearly $39,000 for nonprofits like World Child Cancer and Bloodwise, cancer treatment and research charities that Balfe and Heughan sponsor.

“It’s overwhelming, and very humbling,” Balfe says. “The fans are so supportive, and they get behind any initiative that we start.”

According to figures released earlier this year by Bloodwise, Heughan’s My Peak Challenge community has raised more than $1 million. “And then there’s the extra stuff,” Heughan says. “You tweet or retweet something about some other charity, and people go and support that. They’re very generous.”

On the ride over to Madison Square Garden, the cast gets a news alert: Brett Kavanaugh has been confirmed for the Supreme Court. A pall settles. The actors discuss how fans have told them “Outlander” is a show that’s therapeutic for those who have suffered sexual assault, because it focuses on the recovery.

“When you get fans who’ve been through that, that’s really hard,” Skelton says. “But in a way, it’s also really nice, because we want to do justice to those women, and help them feel less alone, less guilty. To feel it’s not your fault.”

“Outlander” doesn’t shy away from depicting rape — some critics have complained that the show does so too often. But it forces viewers to confront the consequences. When a character is assaulted this season — no spoilers, but readers know — the show steers clear of showing the act itself, and focuses instead on the reaction of people outside the room, on “the fact that they didn’t do anything,” Davis said.

This is why “Outlander” remains relevant even though the show takes place (for the most part) in the past, Balfe says. “It deals with real issues all the time, even if it’s the guise of a fantasy and an epic story. It’s a safe place.”

For all the Claires of the world.