In this episode, Jamie and Claire go to the theater, and the play’s so bad the crowd bails on it to watch Claire perform hernia surgery instead. It’s a telling moment in an episode that shows two very different ways to put a character in peril, and the implications of the stories “Outlander” is telling.

First, Jamie. Jamie himself is perfectly safe sitting beside the friendly Governor. But the Governor set a trap for Regulators and Murtagh’s on the front line, so Jaime’s in peril by proxy. There’s the immediate danger to Murtagh — and the fact that Jamie’s closest friend just doesn’t trust him like he used to. (When Fergus tells him Jamie couldn’t come because he was at the theater, Murtagh makes an incredible face.) But the deeper peril is that Jamie’s hope of not having to pick a side is an impossible dream. He has to accept he’s at war.

There are plenty of machinations involved in warning Murtagh: Jamie precipitates Fanning’s hernia surgery, catches a ride with George Washington, and sends Fergus to Murtagh as he races back to the theater. But the chaos has character behind it. The audience knows Claire can handle the surgery and the skeptics, and we know Murtagh trusts Fergus. “Outlander” laid that groundwork for us over time; we’re happy to excuse a convenient hernia when the characters themselves make sense.

Which makes Brianna and Roger’s story all the more frustrating.

When Roger first proposed to Brianna, he proposed to his dream of her. When Brianna had her own ideas about their relationship and her plans for the future, he reacted badly. We knew his cruelty was important, because the camera lingered on how hurt Brianna was in its wake. It was clear Roger had work to do before Brianna trusted him again.

This episode doesn’t seem to remember that. Certainly Brianna doesn’t. Moments after their reunion embrace, Roger’s manhandling her in the street and repeating his demand that she marry him before he’ll bed her. And Brianna agrees, so quickly that it flattens her character and scuttles the reconciliation arc the earlier episodes set up. The hasty handfasting feels less like overwhelming feeling than a reason for a sex scene.

What it actually does is muddy the waters of the fight that cuts through their afterglow, as Brianna finds out Roger knew about the fire at Fraser’s Ridge. The rushed reunion turns into a replay of the same dynamic we’ve already seen — Roger furious that Brianna has her own will, Brianna reeling from Roger’s anger. It sucks the air out of the characters at a time when we’re meant to be investing in them.

And at first, this fight seems designed to keep us from caring about Roger. The last time they fought, heartbreak was his explanation for lashing out, and his trip through the stones to find Brianna seemed like penance. But he’s exactly as guilty as Brianna says — he withheld the truth from her so he could get what he wanted. At that point, his condescension (“ … maybe it’s time you listened to me”) and deflecting (“You’re acting like a child”) seem less like a character with human foibles than one with an emerging pattern of abuse. 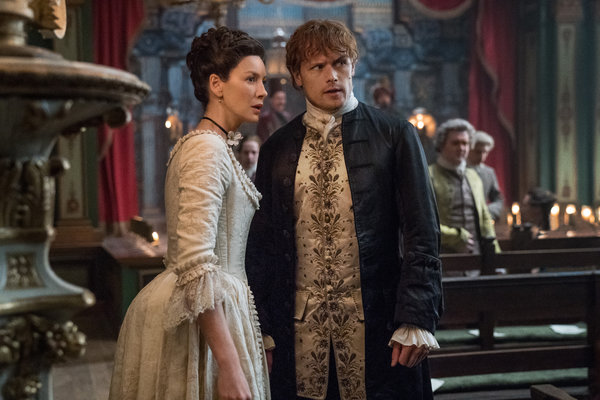 And it is a pattern, right down to Brianna splitting with Roger. The only difference this time is what happens to Brianna after she goes her own way.

Last week’s episode emphasized that Brianna was unprepared for the 18th century, and nervous about the overseas journey. (Roger’s subplot was specifically about dangerous sea travel and shipboard tyranny.) Brianna and her maid Lizzie clearly managed the trip, which suggests she caught on quickly. But she ends up in the clutches of Stephen Bonnet after a chance meeting in which she sees that he has Claire’s wedding ring. When Brianna demands it back, he lures her into his quarters, and rapes her.

We know Brianna has been navigating this period, but we’ve seen so little of it that in this moment she feels like little more than a placeholder — in the service of the plot rather than driving it. She’s unable to clock that Bonnet is bad news, because she needs to be oblivious. She doesn’t remember the safety of Lizzie, because she needs to be alone. We don’t know how she’s been asking after Frasers in Wilmington, because the show didn’t think we needed to see it.

This scene serves no immediate purpose. We didn’t need the reminder Bonnet is a villain. The show did not need another sexual assault to prove the past was dangerous (Roger seems proof that men can be horrible in any era). In fact, the scene is so otherwise disconnected from the episode that it suggests a chilling, unspoken conclusion: This is Brianna’s comeuppance. She gets victimized as proof that she’s vulnerable. Bonnet’s attack is more violent than Roger’s lying, and therefore Roger looks better. Brianna gets raped, in effect, because she told Roger to leave, and “Outlander” apparently wants her to regret it.

There are a number of questions that should inform whether and how to present scenes of sexual assault What purpose does it serves? How is it framed in the narrative? Does it stay on the right side of the line between portraying trauma and reveling in it? Brianna’s rape seems ill-considered. We linger on the card game, listening to her muffled screams and cries, and learn nothing except that “Outlander” skipped over much of her recent history in order to get Brianna — and us — to this point.

This is what the show thought was the most important outcome of this episode. It makes you wonder why.

• I appreciated the moment of Jamie silently panicking that by throwing George Washington under the stagecoach, he’s messed up the entire Revolutionary War.

• There was a wild imbalance of tension in this episode. (Not great news for a romance when you’re excited when they cut away from the pillow talk to a hernia surgery.)

• I hope Fergus and Marsali have a monthly whist party where nothing much happens. They deserve low-stakes friends.