Kelly Ripa and Mark Consuelos have been married since 1996, which is about one million years for Hollywood marriages. Their relationship predates when we all started documenting every second of our love lives on the internet, so sometimes it’s hard to remember these two have been an “it” couple since the days when they played a couple on All My Children.

Ripa and Consuelos have been serious couples goals for years, and it’s not because they’re perfect, but because they are partners in every sense of the word. They’ve raised children together, worked alongside each other on set, guest starred on each other’s shows and just genuinely seem to adore being married to one another.

The couple’s candid honesty is part of their charm. Remember that time Ripa said Consuelos was mean after sex and they talked about it on Live with Kelly and Ryan? Nothing is off limits for these two, which really makes us feel like we’re taking this journey called life along with them.

So in honor of their May 1 wedding anniversary, here’s a sweet stroll down memory lane of the couple’s best moments over the years.

The couple that does yoga together, stays together.

I’m not gonna lie. The mrs. And I got into some freaky shizzzzz this weekend ???‍♂️?‍♀️??‍♂️??‍♀️?#itsbetterinthebahamas #anniversaryweekend

Talk about a fit fam. When you spend your anniversary weekends working out together, you know you take your health and wellness seriously. Also, can you teach us that pose? We’re still stuck over here in downward dog.

A simple kiss during a family outing. 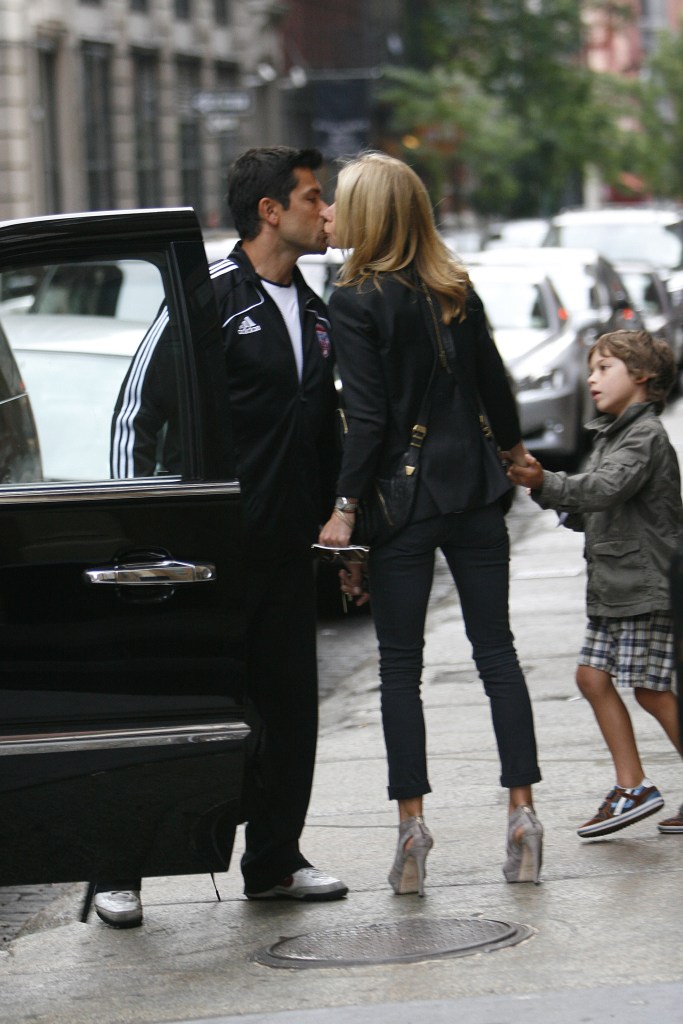 For the most part, the Consuelos kids stay out of the limelight, so it’s pretty rare to see photos or stories of them pop up on the internet. You know you’ve captured a real moment when you see the couple sneaking a quick kiss while out with their son, Michael. This rainy New York day circa 2010 is a symbol of taking time during a hectic day to show your partner some love, even if it’s in the middle of traffic.

A man, his wife and their wax figure. 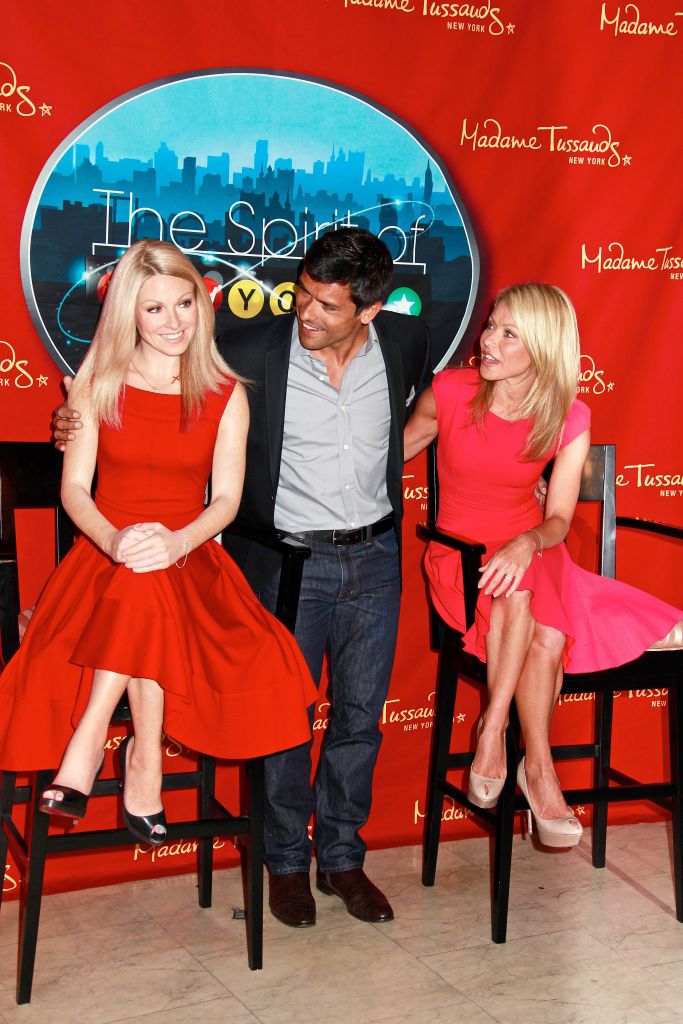 Mark Consuelos is a pretty lucky guy. He got to hang with not one, but two Kelly Ripas at Madame Tussauds wax museum back in 2011. They both look incredible in showstopping red hues, and he looks a little extra smitten by his wife’s wax doppelgänger. We wonder if he would be able to pick out the real Kelly in a lineup?

Supporting a friend at a book launch. 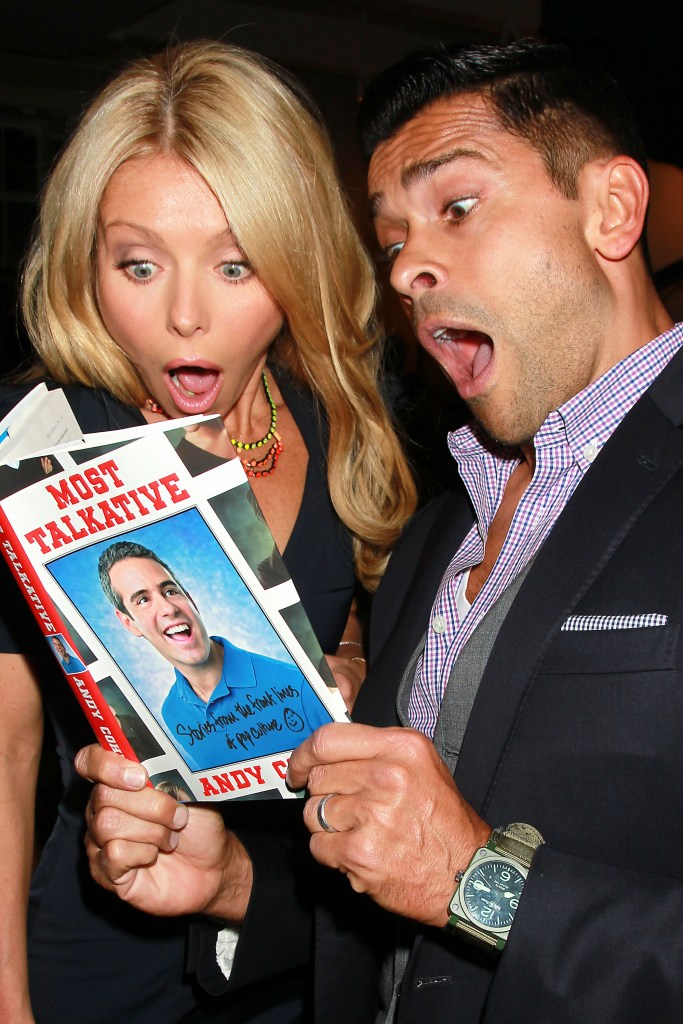 There’s nothing like a quiet evening reading some juicy celebrity gossip together, am I right? Back in 2012, Anderson Cooper threw a book launch party for Andy Cohen’s Most Talkative Stories From The Front Lines of Pop Culture, and of course the duo showed up to snag their copy. They’re definitely besties, so you know Ripa comes home after a long day at work and tells Mark all of the gossip and they spend their evenings dishing over dinner together. At least that’s how I like to imagine them.

A pause on the Hollywood Walk of Fame. 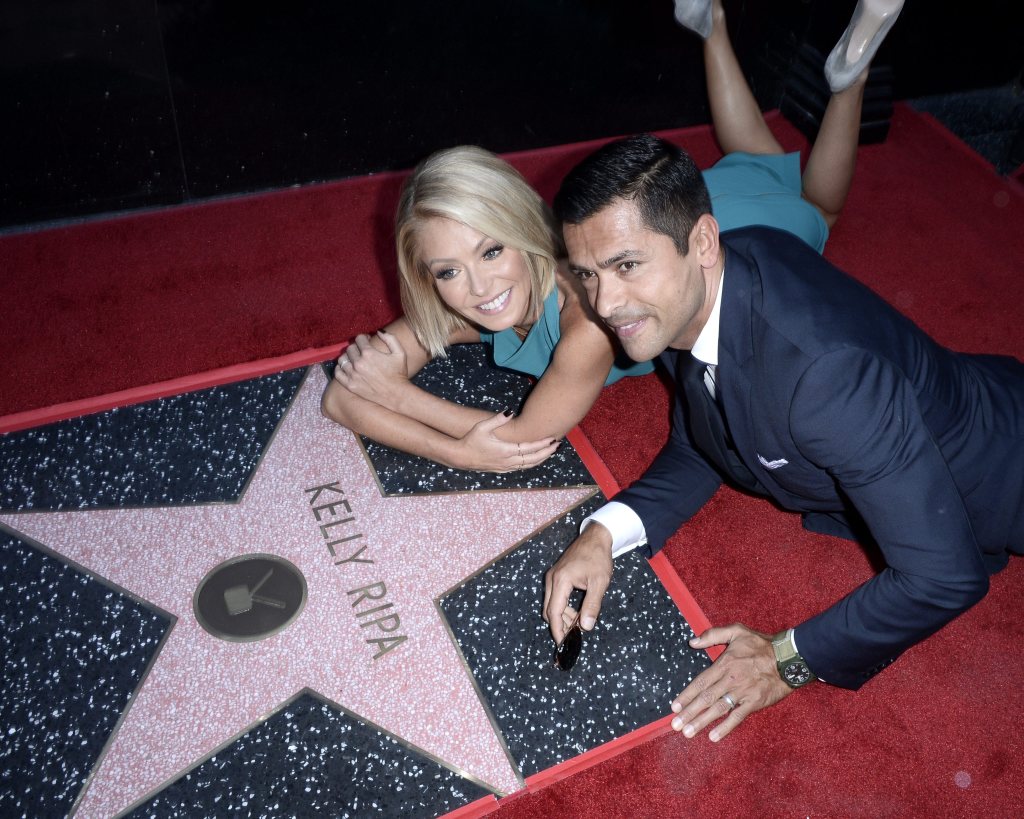 When your wife is given a star on the Hollywood Walk of Fame, you show up, and you lie down right on it if she wants you to. One of the reasons these two have lasted so long in Hollywood together is that they support each other’s highs and lows. One gets honored, the other shows up to be their biggest cheerleader. 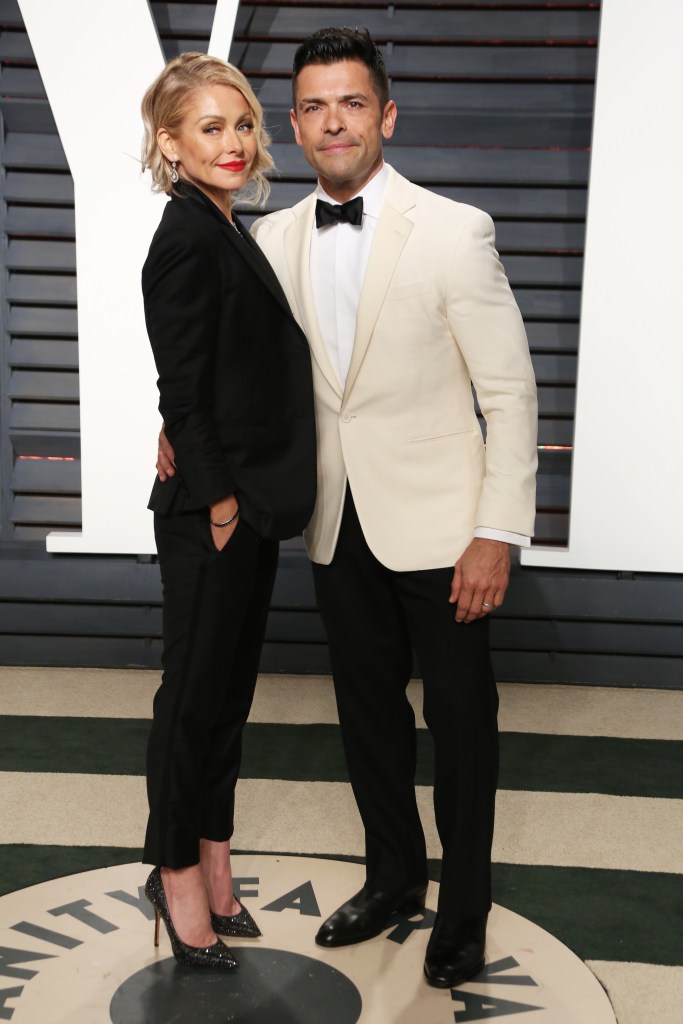 The real story behind this incredible photo is how absolutely dapper these two look together in their suits. Ripa can rock just about any look, and she really killed it at this 2017 Vanity Fair Oscar party. Plus, we love a man who’s not intimidated by a woman in a hot power suit and a champion red lip.

Feliz navidad From the Consuelos fam and Chewie. #antlers

Because who doesn’t hang out on Christmas morning with their partner in loungewear, a glass of champagne, a cute pup, and some reindeer antlers? When the spotlight isn’t on them, Ripa and Consuelos seem to relish their downtime and try to live a pretty normal life with each other and their kids. Even after all these years together in Hollywood they manage to maintain their sense of normalcy on the holidays.

A morning on set.

Hey doing the show with my fave now..!!!

What wife wouldn’t want her husband to visit her at work every once in a while? Consuelos pops into the “Live with Kelly and Ryan” show fairly often, sometimes even as a cohost. Their laughter and chemistry are always so genuine that seeing them together on screen is always like a breath of fresh air. Plus, he always calls her his “fave” in his Instagram captions. Does it get any cuter?

There’s a lot to be said about this dynamic duo’s work ethic. She’s always crazy busy with a show that airs every single weekday, and Consuelos’ schedule is jam-packed playing Hiram Lodge on Riverdale. When your schedules are that insane, sometimes you have to sneak some “I love yous” in through FaceTIme like the rest of us little people.

They only have eyes for each other. 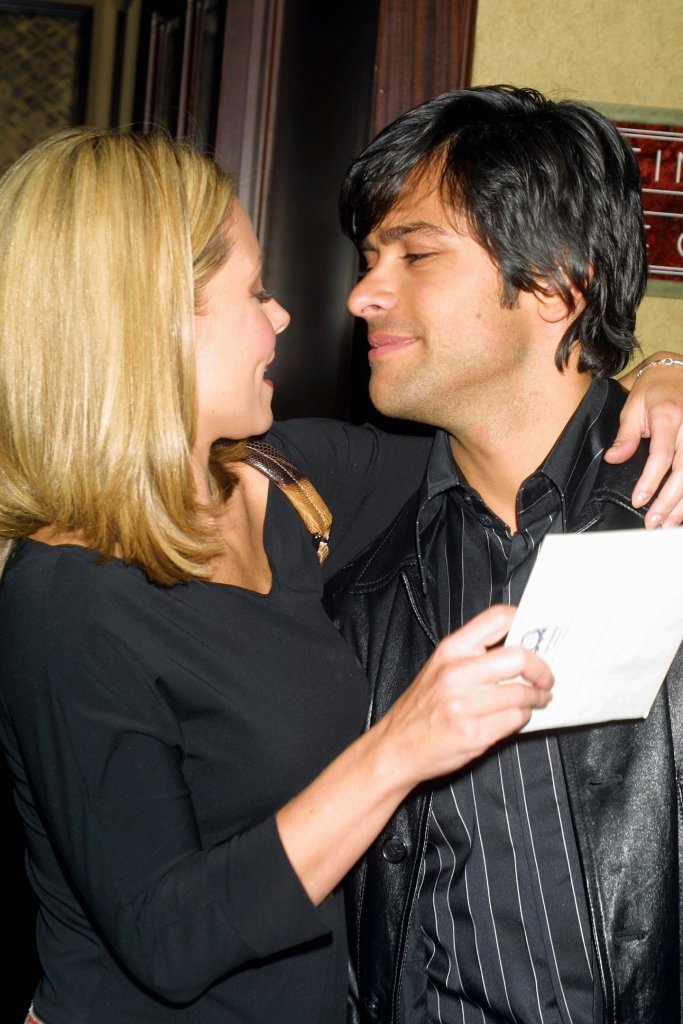 Talk about a throwback. Although Ripa and Consuelos constantly show us what it’s like to make a relationship work and how to keep the spark alive, you can definitely tell this one is from the early days. These two lovebirds can’t look away from one another during the new nightclub debut of Susan Lucci in Manhatten circa 2001. Plus, who would be able to take their eyes off of that shaggy early 2000s haircut Consuelos is rocking? 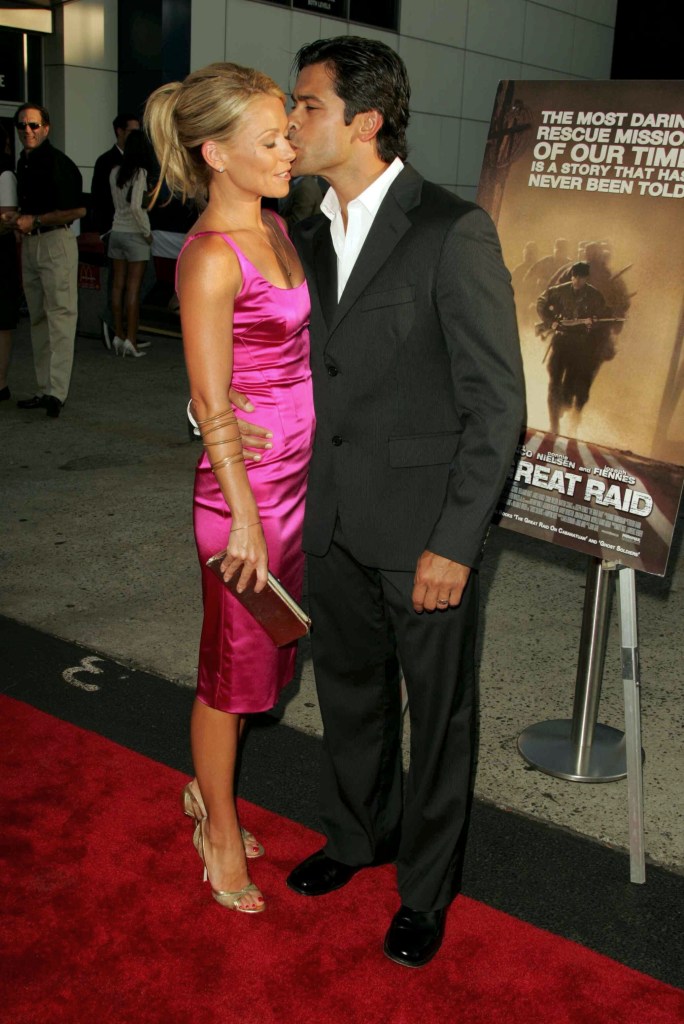 Before he was The Man in Black, mob boss extraordinaire of Riverdale, Consuelos was Corporal Guttierez in The Great Raid. This was one of his earliest film roles back in 2005.

A little cake in the face never hurt anyone, right? 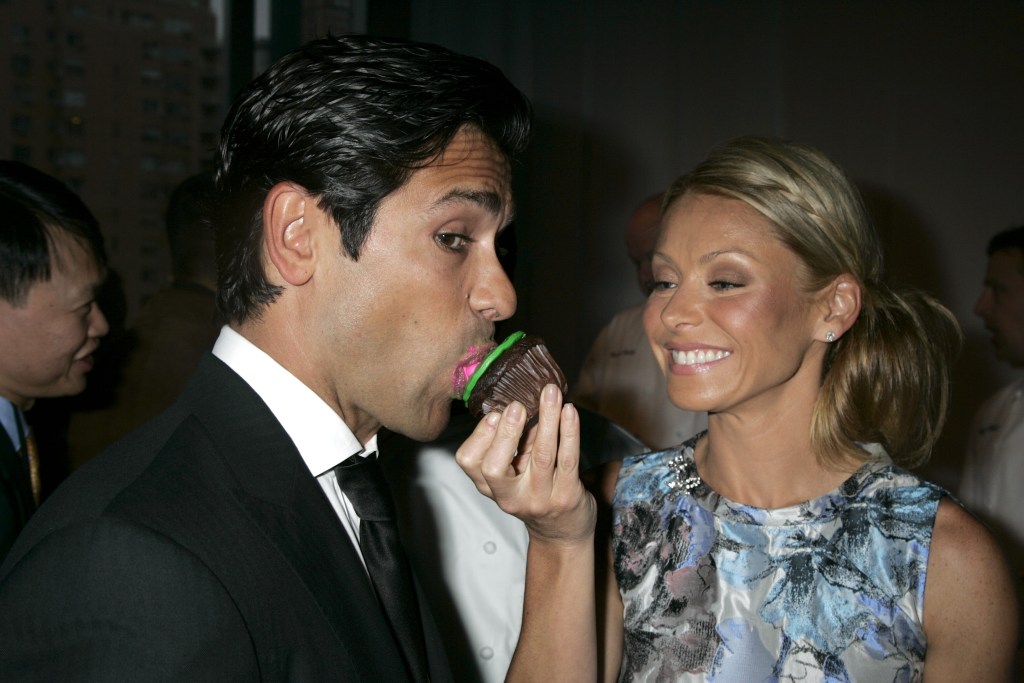 Sure, most couples feed each other cake on their wedding day, but how many duos pop a tasty treat on the other’s face on the regular? These two are never afraid to be a little goofy, even when they’re at a black tie event. It’s always so refreshing to see a celebrity couple that isn’t afraid to laugh, have a silly moment and stop caring about what kind of shot all of the cameras are getting.

Guarding the bump against the paparazzi.

This last one is a bit fuzzy, but that’s because Ripa probably scanned in or took a picture of an actual printed photo from back when she was pregnant with her daughter Lola, who is now 17. She clearly has tons of respect for her daughter’s desire not to have her own photo on her mother’s feed for her birthday, so Ripa got creative with it. This old school picture is the perfect snapshot of a growing family feeling both the bliss (and probably the stress!) on the upcoming birth of their little one.

Here’s to many more years of watching these two support one another on and off the screen.