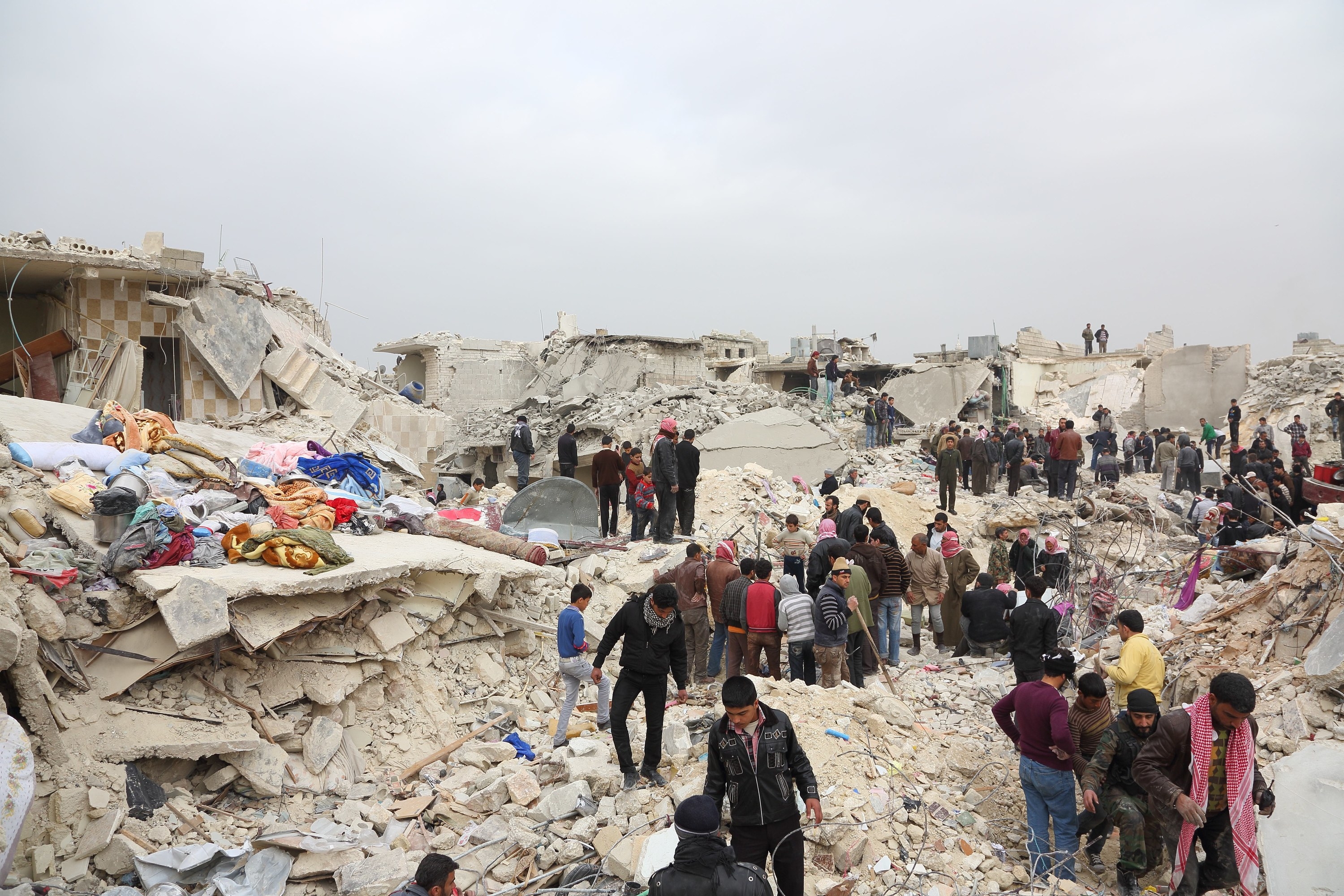 People search for survivors in the rubble of homes in the Ard Al-Hamra neighborhood of Aleppo, many of which were destroyed in a missile attack in 2013.

I first heard the news of Qassem Soleimani’s killing from friends back home in Syria, texting me late into the Syrian night. By the beginning of the following day here in the US, thousands took to the streets in more than 70 cities to protest the possible war with Iran that they feared would follow.

Watching the reactions of my Syrian friends on social media alongside the swift opposition to the strike in the United States reminded me once again of the gap between two worlds — the country I was forced to flee, and the one I’m trying to call home. I feared for the lives that would be lost when Iran retaliated, because as a Syrian, I know first hand that we are always the ones who die in other people’s games.

But my Facebook feed was ecstatic, flooded with pictures of Syrians handing out sweets in celebration of the assassination and memes of Donald Trump saying, in a Syrian accent “I don’t do diplomacy, I hit hard”, or winking at Syrians, or giving them his famous thumbs up.

You might think the Syrians celebrating this strike are supporters of Trump and his approach to the Middle East. But those same people shared pictures of their leveled homes in Raqqa, blaming the United States for destroying their cities while fighting ISIS. They are the same people who are well aware that their loved ones paid with their lives for America’s fragmented involvement in the Syrian crisis. Are they “pro-war?”

Joman Hasan, a Syrian student who has lived in exile since 2014, was a pharmacist when the revolution erupted in 2011. “I heard the news of Soleimani’s assassination at 1am,” she told me. “I got up, turned the lights on, and wept for all of the kids in Madaya who died of starvation. I wept for the siege of Yarmouk. I wept for the rubble of Aleppo,”

“Soleimani had a hand in all of these tragedies,” she said. “I felt for the first time in nine years that war criminals can die.”

One of Qassem Soleimani’s best-known battles on Syrian land was over Al-Qusayr in Homs, which the Syrian regime regained from the armed opposition with the aid of Iran and its militias. Hasan was 22 years old then, and had been detained for her activism against the Syrian regime. “Celebrating their victory in 2013, our jailers tortured us out of happiness,” she said.

Basem Ayoubi, a photojournalist from Aleppo, tried to remain in his hometown until the last wave of mass displacement after the 2016 siege of his city. “After my forced displacement, I saw a picture on Facebook of Soleimani walking on the rubble of our house, in the neighborhood that raised me,” he said. “I didn’t feel victorious when Soleimani was killed. I know what happened was a political playoff, but still, I can’t deny that I had a sense of relief, a sense of divine revenge.”

The anti-war movement in the United States often fails to consider the voices of their fellow revolutionaries in Syria, Lebanon, Iraq, and Iran, and this US-centric mentality can push them away from values of global citizenship and solidarity. The United States did not threaten a war only when it killed Qassem Soleimani — it has been involved in one since long before Donald Trump was elected in 2016. When I asked friends in Idlib, the last rebel-held area in Syria, what they thought of the anti-war demonstrations, most of them laughed.

“What have we been living in for the last nine years if not a war, a joke?” one asked. “Where were they when the actual war started against the Syrian people by the Syrian regime, Iran, and Russia nine years ago?” I had no good answers.

The human cost of Iran’s many proxy wars isn’t only experienced by the civilian populations it sees as its sectarian or political enemies. Ali, a 20-year old student from Southern Lebanon, lost six members of his immediate family during the 2006 Israel–Hezbollah War. Soleimani was a prominent military leader in that war, setting secret centers for Hezbullah among the homes of the region’s Shiite Muslim civilians. When these centers were targeted by Israel, Ali’s grandmother’s house was one of the many casualties.

“When I knew that Soleimani was one of the leaders in that war, I blamed him for setting up centers among innocent civilians, and not warning anybody to hide. I later saw his pictures in Aleppo after its people were driven out, I learned from my Iraqi friends about the massacres he mastered in Nasiriyah, and his criminal activities against the protesters in Iran,” said Ali, who asked to use a pseudonym. “I’m glad a criminal like him is dead.”

The people of the Middle East didn’t ask for their homes and neighborhoods to be used as battlefields for world powers. International law didn’t save them, so its little wonder many laugh off the complaint that killing a war criminal like Qassem Soleimani was illegal. Their reactions reflect the world in which they live, one where their daily deaths did not prompt demonstrations across America. Show some solidarity with them.

Sarah Hunaidi is a Syrian feminist, writer and member of the Syrian Women’s Political Movement

The Party Films Sales Unveils Slate, Including SXSW-Bound ‘The Mystery of the Pink Flamingos’ (EXCLUSIVE)
ENTERTAINMENT