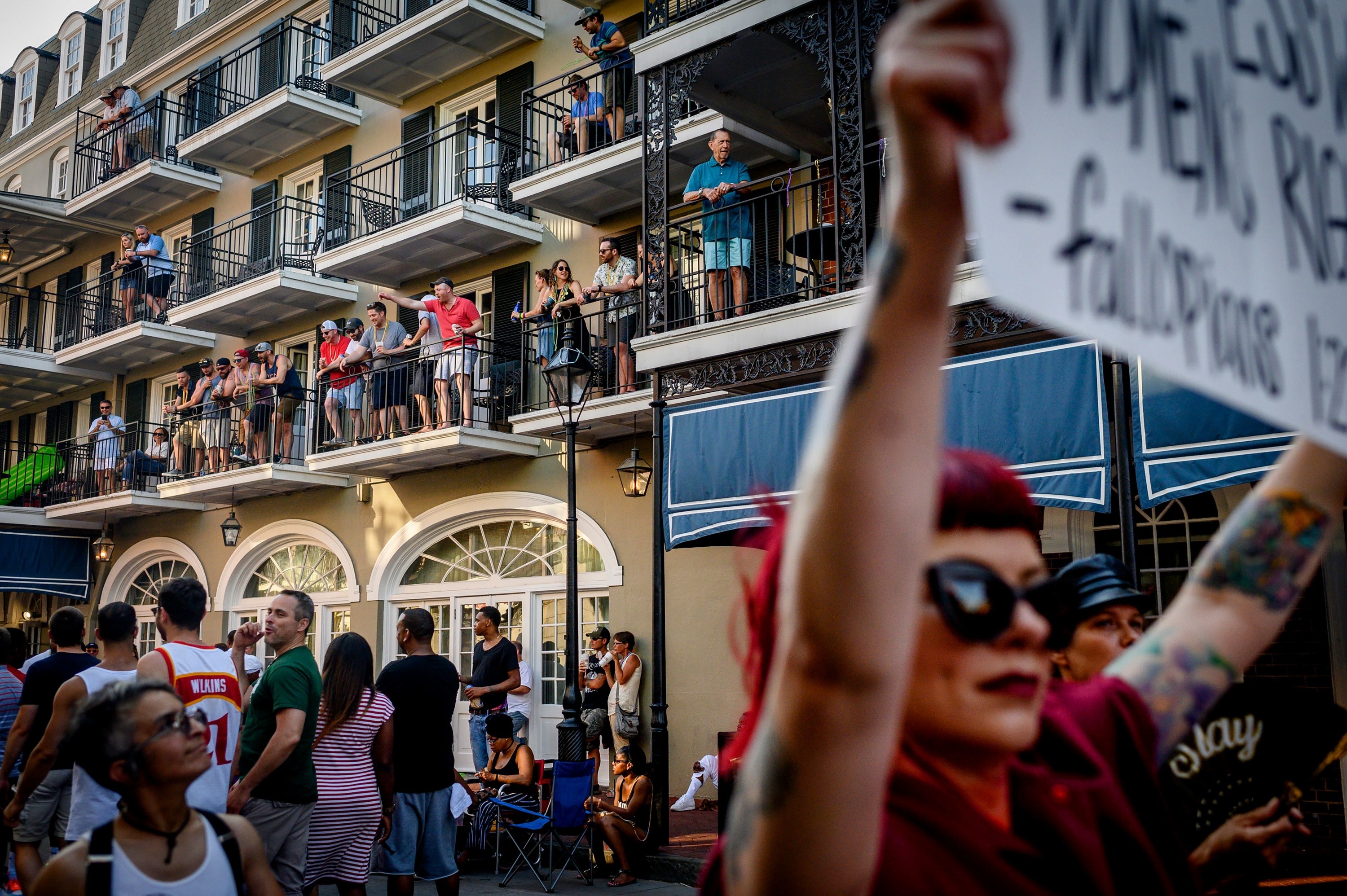 Protesters march down Bourbon Street in the French Quarter of New Orleans, in 2019, to protest a proposed anti-abortion bill.

Next month the Supreme Court will hear arguments in a case that could leave just one abortion clinic open in the entire state of Louisiana, and pave the way for anti-abortion politicians in other states to do the same — effectively abolishing the protections of Roe v. Wade, 47 years after the case was decided.

I had just started working my first job with a decent salary and benefits in 2015 when I discovered I was pregnant. When I told my boyfriend, he apologized and said he needed to focus on his future, and this would mess that up. He offered to send money to compensate me.

I made two decisions after that. First, that if I was to go through with this pregnancy, I would do it on my own. Then I thought about my future and the best choice was, for me. That’s when I made my second decision. I decided to get an abortion.

First, I wasted three weeks going back and forth, an hour each way, to what I believed was a health center that could help me get an abortion. It turned out to be an anti-abortion crisis pregnancy center — one of more than 2,500 across the country, multiplying while abortion providers are being regulated out of existence. There, I was asked deeply personal questions, made to sit through two ultrasounds, watch a video of complete lies tying abortion to breast cancer and other health risks, and told multiple times that if I just came back for one more appointment, they could schedule my abortion. At one point someone told me that I wasn’t “the type to get an abortion.”

One in four women in the US have an abortion in their lifetime. There is no “type.”

It wasn’t until I went to Planned Parenthood that I finally got the information I needed. I was told where I could get an abortion and what the process would be like. I traveled 250 miles each way to Hope Medical Group in Shreveport, home to one of the three remaining abortion clinics in the state: once for state-mandated counseling, and once for my procedure.

Both times, the doctors and staff at the health center made me feel supported, not judged. I was asked multiple times to confirm that this was what I wanted, and that I was not being pressured into ending my pregnancy. They empowered me to make my own decision. Unlike the crisis pregnancy center. Unlike the state government.

In early January, 207 anti-abortion politicians wrote an amicus brief to the Supreme Court regarding the upcoming Louisiana case, arguing that the right to abortion is “unworkable.” The threat has never been more clear.

As a woman in Louisiana, my opinion should carry more weight than these 207 mostly male politicians who are not women in Louisiana (that’s right: none of the brief’s signers are Louisiana women who would be affected by the ruling. And only 13 of them are women.)

What I know from personal experience is that it’s already very hard to get an abortion in Louisiana. The state has put up a series of hoops women must jump through — including state-mandated counseling designed to convince you not to have an abortion, and a waiting period designed to put you in time out and make you travel back and forth to multiple appointments. I jumped through their hoops and more. I don’t wish my experience on anyone.

Like most women, I do not regret my abortion. I was able to keep my livelihood, without worrying about whether having a child would make me an undesirable employee or about how I would make ends meet. Today I am still working in that job, helping low-income residents with housing.

There are one million women of reproductive age in Louisiana. Our choices about our bodies and our futures are individual decisions.

Politicians in Washington and in Baton Rouge can write their opinions about abortion in legal briefs, in newspapers, in speeches to their donors. They’re entitled to those opinions. But they are not entitled to use their position to make my decision for me.

Jasmine Rivers is an avid supporter of women’s rights, who enjoys watching reruns of The Office and supporting her local Planned Parenthood.