BERLIN — Since the Metropolitan Opera began broadcasting live to movie theaters, in 2006, companies from the Bolshoi to the Komische Oper Berlin have seen digital distribution as crucial to positioning themselves internationally. Only a handful of players have the standing and resources to create for cinema, and many organizations in Europe turn to free web streaming, but never before have opera houses had such freedom to produce their own content.

The Met broadcasts to cinemas in 70 countries. The Royal Opera House in London relays to cinemas in 51 countries, while the Paris Opera is present in movie theaters in 18 countries. The Staatsoper Unter den Linden in Berlin recently transmitted a production of Verdi’s “Macbeth” to French cinemas and plans a live broadcast of one production next season (last year, the house also began streaming on its own website and in collaboration with broadcasting partners).

Institutions from the Glyndebourne Festival to the Salzburg Festival have partnerships with the online platform medici.tv, which last year celebrated its 10th anniversary and has about 280,000 registered users. Stingray Classica officially starts within the network of Amazon Prime Video in June, featuring such organizations as the Teatro Real in Madrid and the Royal Opera House, while Opera Vision offers free streams from more than 20 houses across Europe.

The flood of offerings is a result of reduced coverage on public television, an unstable recording industry and the low cost of producing for the web. While a cinema broadcast involves filming methods that are more sophisticated than even those of television, a typical stream can be executed with about a third of production costs.

“Streaming is really about access and visibility,” said Peter Maniura, project director for the classical archive and orchestras digital strategy at BBC Music. “The vast majority of organizations” have not tried to monetize their product, he said, “for the simple reason that there are very few with sufficient scale and impact to actually be able to make money.”

He distinguished between a “tradition which the Met started for high-quality cinema experience” and the “public service space” — which was traditionally in television and has now in part migrated to the internet — where viewers expect to have free content. “The major players have been in a position for a number of years,” said Mr. Maniura, citing as examples the Met, the Royal Opera or La Scala in Milan. “It’s hard for a midscale house to match that.”

La Scala in October produced Mozart’s “La Finta Giardiniera” in 8K (the current highest ultra high definition resolution) together with the Japanese broadcaster NHK. The house’s longstanding partnership with Italy’s RAI television and radio has branched out into three annual productions for cinema and limited-time streaming.

With the Met’s “Live in HD” series, the general manager, Peter Gelb, built upon the audience for Saturday matinee radio broadcasts that began in the 1930s and continue to draw an international following. One cinema transmission attracts an average total audience of 240,000 to 250,000 people, while ticket sales average 2.5 million annually, Mr. Gelb said.

“This is the one commercially successful part of our overall operation,” Mr. Gelb said by phone from New York. The series brings in a net revenue of $17 million to $18 million, which he said was “not a cure-all but helps in addition to box office revenue and fund-raising.” 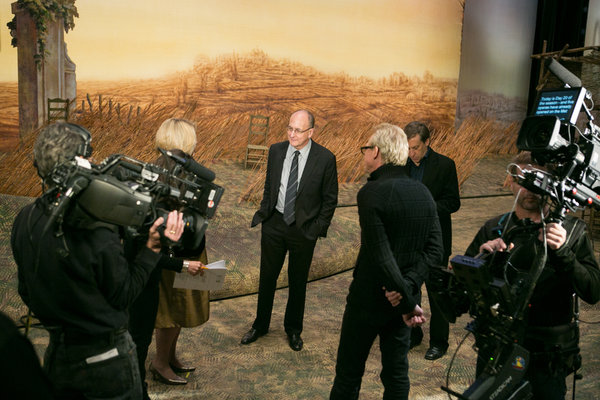 All 10 productions per season are also broadcast nationally on PBS, but the live format is reserved for cinema. The web-based service Met Opera on Demand, which has more than 15,000 subscribers, makes content available after three to six months and includes radio broadcasts.

When in-house attendance began declining in 2013, there were concerns that the low cost and comfort of watching new productions at a local movie theater were infringing on ticket sales. But Mr. Gelb said that a survey three years ago exploring the correlation between cinema attendance and in-house attendance found, “that the HD transmissions had no negative effect on box office attendance.”

“If anything,” he said, “the transmissions help gain some traction for opera.”

He admitted, however, that affordable rush tickets and student ticketing programs had been more successful drivers of new audience members. He also emphasized the use of electronic content for educational purposes: More than 140 American universities and international institutions, including the Sorbonne in Paris, subscribe to the service Met on Demand: Student Access, while a program for children in more than 30 American school districts combines classroom education with visits to the HD broadcasts.

The Staatsoper Unter den Linden’s general director, Matthias Schulz, also sees the distribution of digital content as crucial to ensuring opera’s relevance in society at large and acknowledged Mr. Gelb’s pioneering role. But he will not broadcast live to movie theaters in the Berlin area so that local residents will attend in person. “One should rather make sure that opera becomes truly widespread,” he said, adding that it is “totally wrong” to expect that they will make a lot of money from broadcasts in the coming years.

The house reported 25,000 views for its stream of Rameau’s “Hippolyte et Aricie” this season, which was available for 30 days on Arte Concert, a web-based platform of the French television network Arte (a television documentary follows next month, featuring interviews with the conductor Simon Rattle, set designers and more). The Bavarian State Opera, now in its seventh season of free live streaming on its own site, cited as its record viewership 170,000 people from 50 countries for Wagner’s “Parsifal” in a live transmission and 24-hour video-on-demand last year.

Mr. Maniura emphasized the importance of going beyond full performance relays to build “a richer landscape of connection with audiences.” In 2017, BBC Arts Digital joined forces with BBC Radio 3, nine British opera houses and other organizations for #OperaPassionDay, which included live streaming but also a pop-up performance, museum exhibit and social media campaign.

“There is an enormous world of contextualization,” he said. “This is the place where digital technology can change the degree of engagement.”

The content generated from cinema broadcasts only facilitates a company’s presence on social media and other online platforms. But Mr. Gelb is wary of diluting the Met’s brand by joining aggregate streaming sites.

He stands by cinema as fertile ground for providing the audience with new perspectives on the art form, whether through interviews, glimpses into the costume shop or extracts of documentaries.

“We, the producers, are in total control,” he said.