Netflix canceled “One Day at a Time” last month, saying it was a “very difficult decision” not to renew the series for a fourth season on Twitter. The streaming giant said that “simply not enough people watched to justify another season.”

Below is an excerpt from the piece:

“So we’ve learned that evidently all the details are in the ‘data.’ We get it; corporations are responsible to their stockholders. And one could argue that it’s the data — what we’ve known through the years as Nielsen ratings — that inevitably drives the decision-making process. But something is missing if that is the only criterion for survival of a show, the only data point, the only litmus test. Perhaps media has gone the way of managed care — the focus no longer patient and doctor, but bottom line.”

But the reality is that if a show doesn’t have an audience, a network will pull the plug, and Netflix is no different.

“One Day at a Time” was a critical hit (the series has a 98% Rotten Tomatoes critic score), and had a passionate fanbase. But data provided to Business Insider last month by analytics company Jumpshot backs up Netflix’s claim that there wasn’t a large audience for “One Day at a Time.”

The data shows viewership for the show was steadily on the rise from season to season, but still not enough to save it from cancellation. Jumpshot estimated the first season gained 382,000 views in it first week of release; the second season was viewed 481,000 times; and the most recent third season had 647,000 views in its first week, up 34% from season two.

READ MORE: Hulu is making a big bet on Marvel TV shows with ‘Ghost Rider’ and ‘Helstrom’ after Netflix canceled 5 of its own Marvel series

Some other Netflix shows got more viewers but were still canceled.

“Jessica Jones,” which Netflix canceled earlier this year, reached over 3 million views in the first week after season two was released last year, according to estimates by Jumpshot.

The chart below breaks down the numbers: 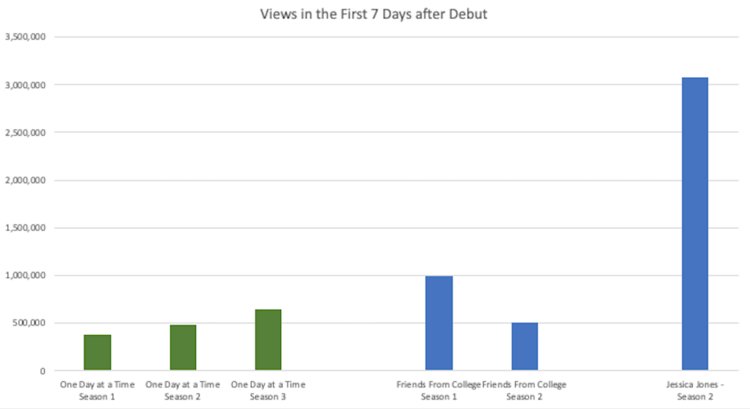