If you were looking for a single week that captured the story of pop music this year — or maybe hit-making in the streaming era writ large — zoom in on April 26, 2020.

Time has passed hazily since March, so if you need a refresher, this was the week America officially surpassed one million cases of Covid-19, the British prime minister, Boris Johnson, returned to work after his own battle with the virus, and White House officials reassured the American public that the president of the United States hadn’t actually suggested injecting bleach into one’s bloodstream.

In the music world, the news was more benevolent. On April 29, Beyoncé and Megan Thee Stallion released a remixed, collaborative version of “Savage,” the swaggering Megan solo track that had already taken TikTok by storm. Two days later came another: Doja Cat’s summery “Say So,” now with added verses from her stylistic forebear Nicki Minaj. Billboard watchers settled in for an epic chart battle, if only because everything else happening in the world was unimaginably depressing.

Once the numbers had been tallied for the May 16 Hot 100 chart, Doja Cat and Nicki Minaj’s “Say So” came out on top, with Megan and Beyoncé’s “Savage (Remix)” arriving at No. 2. In a larger sense, though, it was a win for all four of them: This was the first time that four Black women had occupied the top two spots on Billboard’s Hot 100 chart. And, two weeks later, when “Savage (Remix)” surged to No. 1, this sense of a shared coronation was even more palpable.

Widening the lens a bit, though, these high-profile, fan-army-uniting duets were the latest iteration of one of the year’s defining pop trends. From May 16 until August 8, each song that topped the Billboard Hot 100 was a paired collaboration. In a year that sanctioned social distancing and solitude, our pop stars were joining forces like never before. 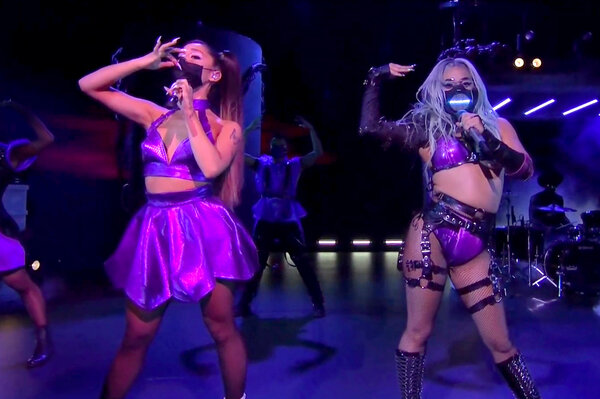 OK, maybe not like never before. Musical collaborations are common in any era, and it’s no coincidence that all three of the longest-reigning Hot 100 No. 1’s of all time are the product of multiple artists: the country-rap handshake that was Lil Nas X and Billy Ray Cyrus’s 2019 “Old Town Road” remix; the 2017 global juggernaut “Despacito,” originally released by Luis Fonsi and Daddy Yankee, then given an English-language boost with a Justin Bieber remix; and Mariah Carey and Boyz II Men’s 1995 all-star tear-jerker “One Sweet Day,” a Voltron-like unification of two ’90s R&B powerhouses.

When a single can appeal to multiple genre formats, cultural backgrounds and fandoms, it has the potential to move more units — that’s just simple math. But in a pop musical moment ruled by streaming numbers, passionate stan communities and algorithmic savvy, it’s become even more clear why A-list collaborations have proved to be the safest chart bets. Call it the Avengers era of pop music.

Take, for example, “Rain on Me,” Lady Gaga and Ariana Grande’s house-pop team-up that hit No. 1 on June 6, the week after “Savage (Remix).” This was the second single from Gaga’s album “Chromatica,” following “Stupid Love,” a dance floor thumper that did respectably if not spectacularly on the Hot 100, peaking at No. 5. “Rain on Me” easily bested it. On Spotify, it now has more than double the plays of “Stupid Love” (474 million to the first single’s 213 million) and is fast approaching the play count of Gaga’s biggest hit, “Bad Romance” (485 million). What’s better than Lady Gaga’s Little Monsters rallying behind a single? Little Monsters and Grande’s Arianators rallying behind a single.

Solo or in a pair, Grande has been an exceptionally successful artist in the streaming economy, which also means she’s a desirable power-duet partner. Justin Bieber found this when “Stuck With U,” their quarantine-themed charity single, went to the top of the chart on May 23 (the week between the “Say So” and “Savage” remixes). Someone who did not feel especially charitably toward the song was the rapper and provocateur 6ix9ine, who fervently criticized Billboard when his post-prison comeback track “Gooba” debuted two spots behind “Stuck With U,” despite topping the weekly Streaming Songs chart.

Billboard weighs purchases more heavily than streams, but 6ix9ine accused Bieber and Grande of trying to “buy” their way to No. 1. Implicit in the rapper’s otherwise petty critique was the challenge presented for any solo artist now expected to compete with conjoined duos of superstars and the combined power of their fan bases. So when it came time to release his next single, “Trollz,” 6ix9ine called up his most high-profile ally, Nicki Minaj, to collaborate on a remix and, naturally, summon the support of her fearsome, all-powerful fan army, the Barbz. On cue, the pair’s “Trollz” remix debuted atop the chart on June 27, giving 6ix9ine his career-first No. 1.

Neither “Trollz” nor “Stuck With U” lasted at No. 1 longer than a week. But a song that has managed to balance attention-grabbing with staying power is perhaps the mother of all 2020 collaborations, Cardi B and Megan Thee Stallion’s gloriously libidinous “WAP.” The third No. 1 hit of the year to feature two Black women, “WAP” was a powerful show of solidarity between two contemporaries who — had they emerged a generation or two ago, when plenty of people in the music industry believed the self-fulfilling lie that only one successful female rapper could exist at a time — might have been pitted against each other as rivals. Instead, “WAP” finds them showcasing their differing though complementary musical personalities and weathering the reactionary conservative backlash to the track more blithely than they may have been able to alone.

“Empowerment” is one of modern pop music’s most virtuous buzzwords, and it’s easy for labels to spin these collaborations into inherently positive, feel-good narratives of mutual support. And given how white and male the Hot 100 has skewed in recent years, it’s certainly refreshing to see so many Black and female artists triumphing while ostensibly rejecting the idea that they are inherently each other’s competition. But, especially in a year when touring wasn’t a viable income stream, collaborative hits also seemed like savvier business strategies in the streaming era of diminishing returns.

The ultimate proof of the power-collabo’s ubiquity is in the way certain fan communities have started to boast about its opposite. When BTS’s first English-language single “Dynamite” hit No. 1 later in the year, for example, a frequent stan refrain was to marvel that they’d done it with “no features.” Most pop actions have equal and opposite reactions, so perhaps the next trend, or next year’s most coveted hit-making flex, will be the solo No. 1.