AMSTERDAM — Edibles is the word most often used for foods that make marijuana and other hallucinogens go down easy. Think pot brownies and space cakes — not exactly famous for pleasing the palate.

But for two Amsterdam-based chefs, it was high time to go beyond simply edible, and to use mind-altering ingredients to create truly gastronomic cuisine. 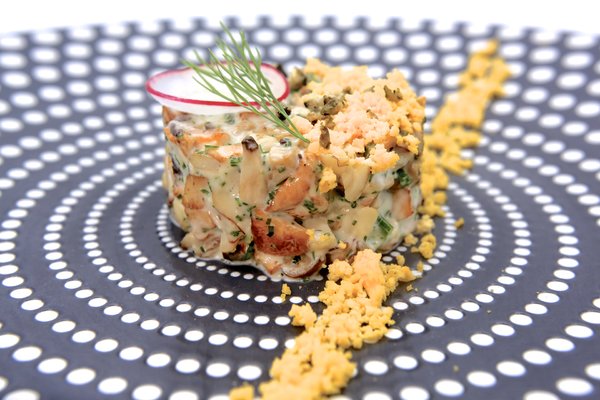 The New York-born Noah Tucker and the former Londoner Anthony Joseph, who have co-founded five successful restaurants in Amsterdam, are on a mission to explore what Joseph calls the “holy grail” of ingredients: herbs, spices, plants and oils with psychoactive components. They started this quest in the Netherlands, where a tolerant policy toward soft drugs makes many of these substances legal and accessible.

In April, the pair’s new television series, “High Cuisine,” had its premiere on the Dutch streaming platform Videoland, and they’re now creating a series of cookbooks that will ultimately pull together about 100 mind-altering dishes.

The TV show follows the two chefs around the Netherlands as they learn about regional dishes, and then source Blue Lotus, Mexican tarragon, South African Kanna and other hallucinogens that are legal here, as well as various strains of cannabis recommended by local weed connoisseurs.

Tucker and Joseph combine what they find into elegantly presented multicourse meals, with dishes such as wild roe with cabbage, bacon terrine, baby salsify, duck’s liver and hash-infused mole sauce; and North Sea crab with crispy seaweed, yogurt sauce and a cannabis reduction.

The program is driven by Tucker, who describes himself at the beginning of each episode by saying, “I love to cook, and I love to get high.” Joseph, in contrast, doesn’t ever take drugs.

In “High Cuisine,” this yin-yang dynamic between the two chefs plays out in comedic moments, with Tucker often giggling in a billow of smoke, while Joseph remains sober and lucid, eloquently introducing each unlikely course to the diners.

The show’s marriage of haute cuisine and hallucinogens might seem possible only because of permissive Dutch drug policies.

But Karim Mostafi, a spokesman for the Dutch Ministry of Health, Welfare and Sport, which oversees recreational drug policy in the Netherlands, said in an email that he could not comment on the legality of the show.

“The Dutch government is aiming at prevention of drug use, in any shape or form,” he wrote. “We don’t have knowledge/expertise on how recreational drugs can be used in meal preparation.”

Mostafi sent links to the ministry’s drug policy statement, which acknowledges that the status of cannabis is “ambiguous” in the Netherlands under the current policy of toleration.

“Selling and using are still criminal offenses under Dutch law, but the authorities choose not to pursue or prosecute lawbreakers,” the statement says.

David Duclos, chief communications officer at Sensi Seeds, a licensed Dutch distributor of cannabis seeds, said that this policy leaves a lot of room for guessing. As far as selling edible products made from cannabis, he said, “there’s no regulation of any aspect of that; there’s no authority which can sign off on any of the products which are sold.”

Iris Freie, chair of the National Association of Smart Shops, stores that sell what she described as “legal and safe alternatives to illegal drugs,” said that “High Cuisine” was raising awareness about how psychoactive edibles can be used.

“You buy a box of truffles and you can eat them just like that, or you can make tea, or you can also make a really nice dish out of them,” she said, referring to so-called magic truffles.

“They also want to address the fact that these substances are illegal in some places and why is that?” she said. “Since they occur in nature, why can’t we consume them? They’re trying to focus on a new angle in this discussion, which I think is positive.”

Tucker and Joseph had both worked in Michelin-starred kitchens before they met about a decade ago in Amsterdam. They subsequently opened five restaurants together, before selling four to focus on their latest venture, Yerba, a “plant forward” restaurant in the city’s Museum Quarter, which serves seasonal dishes made from ingredients that are wild, local and sustainable — but non-psychoactive. The cuisine leans heavily toward vegetarian, vegan and gluten-free dishes that only use animals from “traceable sources.”

About eight years ago, the two chefs came up with the “High Cuisine” concept and began to research the range of psychoactive ingredients available in the Netherlands, visiting cannabis cultivation farms and smart shops, interviewing experts, and then bringing the substances back to their kitchen to explore the flavors and the effects when boiled, braised, caramelized and eaten.

After testing these out on willing friends and experts — “always voluntary and always free of charge,” Tucker noted — the pair took their show on the road.

In each episode of “High Cuisine,” Tucker and Joseph explore a region of the Netherlands and, in addition to stopping at a top local restaurant, they visit a local hallucinogens specialist: a truffle farm, a marijuana seed farm, and, in Amsterdam, an importer and distributor of herbs and plants with an enormous warehouse full of rare goods.

“We looked at all those alternative ingredients as a chef would,” Tucker said. “We looked at their flavor profile, and then paired them with an appropriate flavor combination.

“With magic truffles, we pair it with wild mushrooms, so you don’t even taste it,” he added. “It’s already within the flavor profile of the dish — but you’re getting high.”

Then Tucker and Joseph head back to their own kitchen, and cook up a regionally-inspired feast, to be served to invited guests.

“The whole concept is micro-dosing, which is very important,” said Tucker. “We wanted our participants to leave feeling a slight euphoria, but still in control.” Or as Joseph put it, “about the same as if you had a glass of wine per course with a four-course meal. To be merry.”

The two chefs are now developing “High Cuisine” for an international audience. In June, they expect to start shooting the first segment of a new series in locations such as Colombia, South Africa, Brazil, Mexico and Bali. They plan to learn how ingredients such as chaliponga, peyote and magic mushrooms are used in local rituals, in order to then combine them with culinary specialties from those regions.

“It’s a cooking show, it’s a drug show, it’s a travel show, and it’s a lifestyle show,” said Tucker. “We try to cover all the bases; it turns out we explore the whole culture through food and drugs.”

Duclos, the spokesman for Sensi Seeds, said he had seen attempts at combining cannabis and cuisine in the past, “and most of them failed because the community wasn’t ready for it,” he said.

But with the simultaneous loosening of drug laws across the United States and Europe, and the rise of a global foodie culture, “the timing is really impeccable,” he added.

“Even just thinking about it makes my mouth water,” he said.