Ever since a bite-size peanut butter cracker made him sputter and cough and break out in hives when he was a toddler, Carter Grodi has been under doctors’ orders to stay away from peanuts. He brought his own cupcake to school birthday parties, learned to read food labels, and turned 15 without ever tasting a Kit Kat, Twix or Three Musketeers bar, all of which may contain traces of peanut because they are made in facilities that process the nuts.

But last year, Carter, now 16, gorged on those candies for the first time without having a reaction. He had just completed a yearlong clinical trial of an oral immunotherapy regimen that aims to reduce children’s sensitivity to peanut allergens by gradually exposing them to peanut protein over the course of six months, starting with minute amounts that are carefully measured and increased incrementally under medical supervision as tolerance develops.

The goal of the treatment is not to cure the allergy or enable children to eat peanut butter sandwiches, but to reduce the risk that an accidental exposure to trace amounts will trigger a life-threatening reaction in someone with a severe allergy, and relieve the fear and anxiety that go along with severe peanut allergies.

The results, announced Sunday at a conference of the American College of Allergy, Asthma & Immunology in Seattle, may lead to approval of what could be the first oral medication that ameliorates reactions in children with severe peanut allergies.

After six months of treatment followed by six months of maintenance therapy, two-thirds of the 372 children who received the treatment were able to ingest 600 milligrams or more of peanut protein — the equivalent of two peanuts — without developing allergic symptoms. By contrast, only 4 percent of the 124 children who had been given a placebo powder were able to consume the same amount of peanut without reacting.

Demand for the new drug is expected to be high, and though it is made of peanuts, advocates for people with peanut allergies are already expressing concern about how it will be priced and whether it will be covered by insurance.

One in 50 American children is allergic to peanuts. Peanut allergies are believed to cause more deaths from anaphylaxis, an acute allergic reaction that can include constriction of the airways, than any other food allergy. Deaths are rare, and the precise number is not known. Patients do not generally outgrow peanut allergies, so they must be vigilant throughout their lives.

The double-blinded, placebo-controlled trial of the drug, called AR101 and developed by Aimmune Therapeutics, is to be published Thursday in The New England Journal of Medicine. Aimmune Therapeutics designed and sponsored the clinical trial, which was carried out at multiple medical centers. Five of the 13 authors of the paper are company employees, and the others serve on the company’s scientific advisory board, for which they are compensated.

Experts who were not involved in the trial said the outcomes exceeded their expectations, calling the results “potentially lifesaving.” But they also cautioned that the treatment does not cure peanut allergies and should not be attempted at home. They emphasized that children who complete the regimen need to continue to eat a peanut-free diet and may need to keep up maintenance therapy with minute doses of peanut, possibly for the rest of their lives.

“This is not the cure, but it is a good first step,” said Dr. James R. Baker Jr., chief medical officer of Food Allergy Research & Education (FARE), a nonprofit advocacy group that focuses on food allergies, noting the results were better than he expected. Until now, he said, “We’ve had nothing, nothing to give these poor kids that can keep them from having these reactions and put them in a much more positive outlook on life. It’s just a wonderful thing to have.

“The fact that the kids were eating the equivalent of a peanut a day pretty much tells you that if they accidentally eat a peanut, they won’t have a life-threatening reaction,” Dr. Baker said.

Michael Perkin, a clinical epidemiologist and pediatric allergy consultant at the University of London who wrote an accompanying editorial about the study, said the regimen was “not a walk in the park” and requires tremendous discipline. Children are required to rest for two hours after receiving their daily dose but cannot fall asleep because of the risk of a reaction.

Dr. Perkin said that the long-term side effects of consuming allergens when one has a severe allergy are still unknown. But he described the results as “beyond exciting.”

“It isn’t a cure like an antibiotic that makes a bug go away and it’s not there anymore,” he said. But “psychologically it makes a massive difference if you can keep your kid from living in fear. These kids can eat enough peanut that parents no longer will have to worry about their teenage daughter kissing someone who’s eaten peanut butter. You cannot estimate what a psychological relief that is.”

For children like Carter Grodi, a junior in high school in Ocala, Fla., who completed the treatment a year ago and continues to ingest a small amount of peanut every day to maintain his low-level tolerance, the treatment was transformative, making it easier to go out with friends and make plans to go away for college.

“I can just go to college, meet a bunch of kids, go sit in a place another kid was the day before and not have to wipe off the desk, and not worry about what my friends are eating around me,” he said. “To me, a peanut was like a weapon, like you have a gun to your head and you could have the trigger pulled any time. There’s not really that gun anymore.” 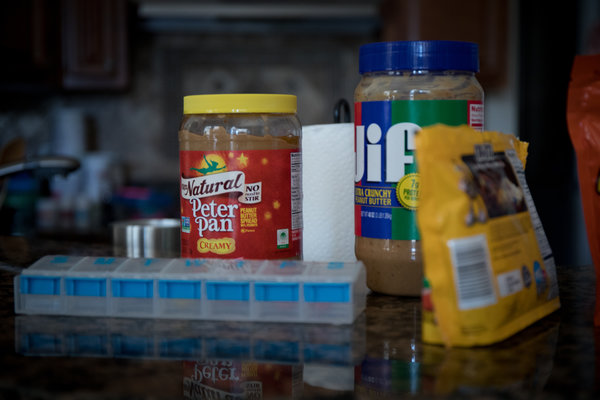 He still does not knowingly eat peanuts or peanut products, but can tolerate the occasional undeclared traces of peanuts that slip into cookies and cakes from cross-contamination in a kitchen or food processing plant. “I have that protection, that shield for the amount I can tolerate,” he said, adding that he no longer takes the medication but eats two peanut M&Ms a day.

The treatment was not effective in the small number of adults enrolled in the study.

The trial, said to be the largest of its kind, included 551 people, of whom 496 were 4 to 17 years old. All of the participants were tested for peanut allergy at the beginning of the study, and experienced reactions to very small amounts of peanut protein, equivalent to one-third of a peanut or less. Most participants had a history of anaphylactic reactions after consuming peanuts, while over half had asthma and another food allergy. Those who had been hospitalized with a severe allergic reaction within the last 60 days were excluded from the study, however, as were those who had severe or poorly controlled asthma.

The drug is described as a “peanut-derived investigational biologic oral immunotherapy drug,” but the active ingredient is simply defatted peanut flour that is carefully measured and packed into capsules or foil sachets of varying doses that are easily opened so the contents can be mixed into unheated food and consumed.

At first, the participants were fed a dose of three milligrams of the drug, staying on that daily dose for two weeks before moving on to the next slightly higher dose, with the goal of eventually reaching a maximum dose of 300 milligrams, which is roughly equivalent to one peanut. The regimen is stretched over the course of six months, followed by six months of maintenance therapy at 300 milligrams a day.

Almost all of the children experienced adverse allergic reactions during the course of the yearlong trial, whether they were in the active treatment group or the placebo group. But over all, the investigators were pleased with the low rate of adverse events.

The idea of oral immunotherapy dates back to 1908, when a British doctor first reported desensitizing a child with an egg allergy to eggs by giving him small amounts of egg to eat over time, said Dr. Brian P. Vickery, the lead author of the paper, who was the lead scientist for the study and an employee of Aimmune Therapeutics while the trial was being carried out. He is now a consultant to the company, as well as an associate professor at Emory University School of Medicine and director of the Children’s Healthcare of Atlanta Food Allergy Program.

“But most studies of this have been flawed and small, or uncontrolled,” meaning they lacked a group of patients on placebo for comparison, Dr. Vickery said. “This trial is the most definitive look at whether this treatment is right for patients. It has generated the highest quality evidence to date about whether oral immunotherapy works and how safe it is.”

Although the treatment itself can induce allergic reactions, patients who complete the treatment gain protection from the inadvertent, accidental exposure. “You exchange that uncertain, unpredictable risk of having an accidental reaction that spirals out of control for these sort of lower level, mostly mild or moderate symptoms, that are manageable for most patients,” Dr. Vickery said.

Dr. Daniel C. Adelman, Aimmune’s chief medical officer and the paper’s senior author, said the company plans to submit a biologics license application to the F.D.A. by the end of the year. The drug has already been designated a breakthrough therapy that will receive priority review and go through an accelerated approval process, so it could be on the market by the end of 2019, a spokeswoman said.

Another company, DBV Technologies, has already submitted an application to the F.D.A. for approval for a product called Viaskin Peanut, which also aims to treat young children with peanut allergies by delivering an immunotherapy compound through a patch worn on the skin.

“It’s pretty exciting,” said Carolee Grodi, Carter’s mother, of the new treatment, saying it came at a good time for her son, who was becoming more independent. “It’s not eradication of the allergy, it’s just protection against an accidental exposure, but that’s huge. People don’t realize it, but peanuts are everywhere.”