Before last year, I had never thought about what happens when the bodies of soldiers killed overseas are returned to the United States. On Oct. 16, 2017, I experienced it firsthand — as I escorted my young sons through an airport to collect their father’s remains.

My husband, Staff Sgt. Bryan Black, and his team were ambushed outside the village of Tongo Tongo, Niger, 12 days earlier. Islamic State militants who had been tracking the unit’s movements shot and killed Bryan along with three other American soldiers. My husband’s remains were transported to Dover Air Force Base for processing within 24 hours of the ambush; it took two weeks after that for his body to be transferred to North Carolina, where we live. It wasn’t until I saw the coffin come out of the commercial jet’s cargo hold that his death finally became real for me.

At 11 a.m., the casualty-assistance officer assigned to our family by the Army picked up me and my two boys, ages 9 and 11, my in-laws and several family members for the hourlong drive to Raleigh Durham International Airport. The officer was the one who had been with us since we’d been notified of Bryan’s death. At the airport, three representatives from the U.S.O., a charity that provides services to military members and their families, met us at the curb and escorted us through security and across the airport to a private room inside the U.S.O. lounge. After a short briefing on the day’s plan, we were guided to the gate to meet Bryan’s plane.

I took my boys’ hands as we rode down the glass-walled elevator and whispered to them that everything would be O.K. I kept my eyes straight ahead and tried hard to walk purposefully — to keep from panicking or crying as we stepped into the crowd of travelers. My children followed my lead until we reached the gate. The casualty-assistance officer called our attention to the 22 soldiers who marched down the main thoroughfare of the airport walkway making their way toward us. Curious travelers stopped and stared at the procession of soldiers in their dress blues — the ceremony’s purpose dawning on the onlookers slowly. Some people snapped to attention to show us respect; some even saluted. Others ducked their heads, as though they were caught staring at a car wreck, then they scurried off or turned their backs.

I looked each of my children in the eyes, steadying them, steadying myself. The devastation inside of me made it impossible to speak. The soldiers to my right began to march in place as an announcement over the intercom at the gate explained who we were and why we were there. Tears rolled down my cheeks. This wasn’t supposed to be me, this wasn’t supposed to be Bryan. We were supposed to be one of the families standing in the walkway that would stop and acknowledge the somber ritual taking place in the middle of the terminal, then continue on our way to a vacation destination. 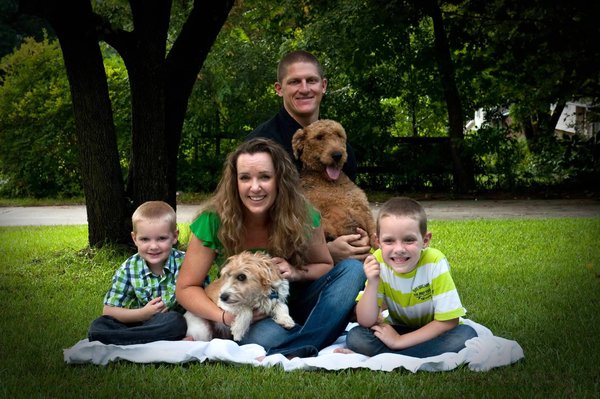 Six months earlier, Bryan was debating whether or not to renew his contract with the Army. He had developed a stock-trading algorithm, and although the program was still in early testing when Bryan left for Niger, he was convinced that soon it would be ready and he could finally get out of the military. After eight years in the service, he was concerned and frustrated with the lack of resources for the men on the ground, whose requests for support and better vehicles were not being heard by those higher up the chain of command. Bryan’s superiors often seemed more interested in furthering their own careers and doing what was right by public opinion rather than doing right by their soldiers. All it took was one mission to prove my husband had been right.

I could feel myself shaking as I was ushered forward toward the terminal door. My 11-year-old autistic son, Ezekiel, squeezed my hand and gave me a reassuring stare. We stepped across the threshold that would take us closer to the reality that Bryan truly was coming home in a coffin. As we walked the long hallway toward the entryway to the tarmac, I felt as though I was on a high-altitude mountain peak, where the oxygen was in short supply. Everything seemed to move in slow motion. Each step took effort. I wanted to shield my children from the horror we were about to confront, but the truth was we all needed to see the box draped in a flag carried by his friends and teammates, so we could fully process that this was real.

The air was crisp and cool as we filed carefully down the metal steps that took us to the ground level. We stood in the designated area and waited for the plane. Someone offered us earplugs for the noise. I helped the boys put theirs in, but I didn’t want any for myself. I wanted to feel and hear the full impact of everything, just as Bryan had when he died. Nothing to soften the blow.

I repeated in my head the thoughts that have kept me going since the beginning of October: I am heartbroken, but I am not broken. People say that you marry your equal; if that’s true, I’m a beast. I will do Bryan proud. I will not be another victim of the men who took my husband’s life and those of his fellow soldiers. My children and I will not be more victims of this tragedy.

The feeling of cold water on my skin brought me back to the present. Two fire trucks on opposite sides of the runway were shooting streams of water in an arc that refracted a rainbow. A commercial airplane emerged from under the arc, and I realized our life together was ending as it had begun: Twelve years earlier, Bryan and I stood outside under a rainbow as we exchanged our wedding vows. As I stood under another rainbow, I thought, I am cold and empty.

Soldiers placed the coffin on a conveyor belt to move it safely out of the airplane to where we could then step forward and view it. While looking down at the flag-covered box that contained my husband, the reality hit me like a sledgehammer to the stomach. I noticed a man I had never met in a green vest with an orange marker used for directing flights. He was weeping. I could no longer hold in my own tears, and I cried out for the father of my children, for my husband, for my broken heart and his lost dreams, our lost dreams. My hands on his coffin, on his flag, my knees threatened to buckle as I tried to catch my breath and quiet my uncontrollable sobs. I wanted no one but his mom, his dad and my children at that moment. I found them and held on tight. Only those who loved him like I did could possibly understand the despair and pain I felt. Those who loved him — and apparently the ground-traffic controller. I started laughing at this thought, which reminded me of Bryan and his odd sense of humor. As I looked up, I caught the young mortician standing next to the hearse checking himself out in the reflection of the back window, and I laughed a bit more through my tears. Bryan would be loving this.

As we stepped away from the coffin, my tears subsided. The soldiers moved the coffin into the hearse. The chaplain called for prayer, and we bowed our heads. As we were ushered toward the stairs that would take us back inside, I looked around one last time. Bryan’s death was now very real. I turned back toward the stairs and I held my head high. Despite the fresh tears, I knew Bryan would have been proud of me.

Michelle Black is a mother of two boys and is a Gold Star wife. She has a background in environmental sciences and horticulture, is an experienced snowboarder and has a passion for writing. She recently relocated to the West Coast.