On my early Prune menus, there were a few items here and there that made many people ask me where in the South I was raised. There was a whole roast suckling pig, and some fried chicken livers with braised lentils. I kept a perpetual batch of pickled tomatoes on the condiments shelf in the walk-in. And for years I ran deviled eggs on the bar-snacks menu. I can see how that would be taken for a Southern nod, but I was actually referencing the big murky jar of pickled eggs kept for blood-sugar emergencies at a shot-and-beer-and-pool-table joint over on East Fifth Street. The bar I frequently tried to wind down in back then.

I have no connection to the American South. But I’ve often noticed that the Southern foods of many countries resemble the Southern foods of many others — the polentas like the cornmeal grits and the porchetta like the whole hogs. The eau de vies like the moonshines. And certain ingredients are simply universal; sesame seeds found in Middle Eastern candies, on a New York bagel, on those fat and dry Italian breadsticks are no less common in the pantry of the American South, where they favor a breed known as benne seeds.

These Cheddar-sesame-cayenne coins resemble the classic Southern cocktail snack — cheese crackers — but they have European DNA. As a starting point, I use the high fat-to-flour ratio of my French grandmother Yvonne’s butter shortbread dough (minus the sugar and the vanilla, obviously), as I have never come across a more tender, more crumbly, more dissolve-on-the-tongue shortbread than hers. And I also use the hard, sharp pecorino Romano cheese of Sardinia for its powerful salinity and tang. A creamy moist white block Cheddar is best — this one from the Northern state of Vermont; too artisanal, too aged, too extraordinary a Cheddar, and the dough will suffer the absence of that milky fattiness. 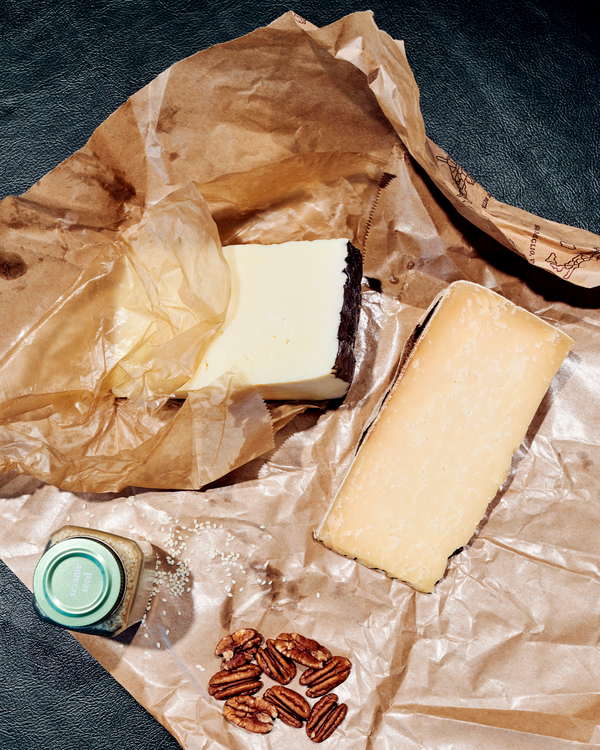 I wouldn’t pretoast the pecans or the sesame seeds — better to add them to the dough raw so that during baking they release — and then sizzle in — their own flavorful fatty oils. Taste your cayenne before you commit it to the dough. The ferocity of the fresh versus the timidity of a stale jar from the back of the cabinet can be remarkable. You want the heat to bloom while you are still chewing the first coin, driving you compulsively to your next, and your next. And your next. They really are addictive, but you want to be left with a pronounced warmth, not watery eyes and a running nose. Finally, bake them close together on the cookie sheets, until mostly golden with darker golden — not quite brown — edges. I recently underbaked a batch and noticed how flabby they were when pale. What a tremendous boost of flavor and texture when you toast them a little harder.

I know it’s a bit of a thing in the American South for the cook to go on and on about her own grandma’s particularly fluffy biscuits and her own family’s particularly delicious pimento-cheese recipe. Even though I find these particularly addictive, particularly stellar Cheddar-cayenne-sesame coins outstanding enough to brag about, in this one particularly Northern way, I can’t bring myself to do it. But I know someone who can. When I made these savory little devils the first time a couple of years ago, our general manager — Mary Katherine Robinson, from the fine state of North Carolina — started crowing over her own Mimi’s cheese biscuits, and then about her Mimi’s homemade peppermint ribbon candies (Mimi calls them butter mints), and even her Mimi’s pot of percolated coffee. I gave her a container of the coins to take with her on vacation, mostly out of delight in discovering that we called our grandmothers nearly the same thing. (Yvonne was Mimime — a toddler’s bastardization of the French word Grand-Mère.)

A couple of days into her vacation, Mary Katherine texted me from her grandmother’s house: “Mimi pulled me aside to show me in the laundry room where she hid your cheese biscuits so that no one else can have any!” These are meant to be shared, not hoarded, though I certainly am flattered by the compliment. The logs can be frozen, then sliced and baked off whenever someone pulls up your driveway — or buzzes from the lobby — unexpectedly around glass-o’-wine hour. And once baked and fully cooled, they can be kept fresh in an airtight container for weeks. Bring them as a house gift; offer them at cocktail hour; make tons of them. Hospitality is hospitality — whether on a wide front porch or a brownstone stoop.