COPENHAGEN — Somewhere in the desert outside Palm Springs, Calif. a new drive-in movie theater is opening. It’s a simple structure, not much more than a screen mounted on a few bubblegum-color pillars, with no concession stand and very limited programming. In fact, the cinema shows only one film, and that film is about fish.

Commissioned for the Desert X exhibition that opens Feb. 9 and runs through April 21 at various sites in the Coachella Valley, the theater — called “Dive In” — is an installation by the Danish artist collective Superflex and forms part of their larger project “Deep Sea Minding.” 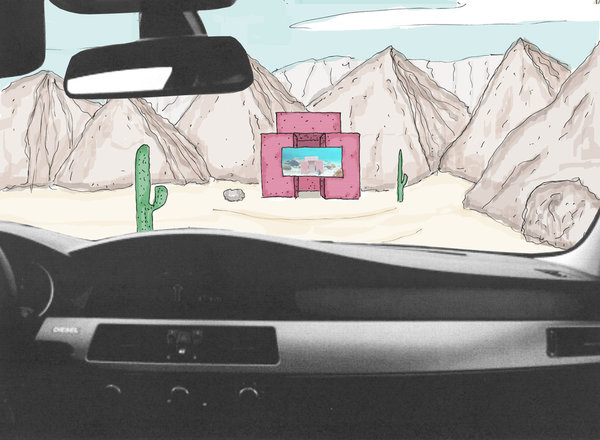 “Dive In” responds to the prospect of rising sea levels by imagining a future in which coastal cities are submerged, and their inhabitants are fish. Blending art, science, and activism, it is a sly meditation on climate change, as well as an excellent primer on how Superflex, founded in 1993, has managed to remain relevant, even crucial, through 25 years.

Based in Copenhagen, Superflex comprises three artists: Bjornstjerne Christiansen, Jakob Fenger and Rasmus Nielsen, all in their late 40s. Early on, the trio obscured their personal names, and although that anonymity proved impossible over the long run, they continue to subordinate their individual identities to that of the group.

With its intentional blurring of art, design, science and marketing, Superflex’s work is difficult to categorize. From “Supergas” (1996), in which it developed a device that turned waste into cooking fuel, to “Hospital Equipment” (2014), a medical operating suite that was displayed at a Swiss gallery before being used in Syria, many of Superflex’s projects have tackled social problems while challenging the economic and political systems behind them. (Other works, such as “Today We Do Not Use The Word ‘Recession,’ ” from 2010, in which the mayor of Cork, Ireland, was encouraged to sign a decree asking the city’s residents to temporarily refrain from using “the R-word,” are perhaps less functional.)

“We take shapes and turn them into better stories,” Mr. Fenger said. “The application of narrative is a huge part of what makes this art.”

Superflex’s founding act was to hire a renowned graphic designer to make a logo for them. Formed while the trio were attending the Royal Danish Academy of Fine Arts, the group had not yet produced any work. But that was precisely the point: Having nothing behind it allowed the logo to function as anticapitalist critique even while it engaged in capitalism’s habits.

By emphasizing their corporate identity, the group also rejected the myth of the artist as solitary genius. Mr. Nielsen, who arrived at art school after aborted attempts at goat herding in Fiji and studying Tibetan in Copenhagen, recalls the shared identity as a natural outgrowth of the trio’s Danish upbringing. “Scandinavia is this weird place where people build a society not on the notion of the strong individual, but on the strong collective,” he said.

While some work, like the poster “Foreigners Please Don’t Leave Us Alone with the Danes” (2002), has targeted sacred cows of Scandinavian identity, Superflex has always been concerned with global forces. The film “Flooded McDonald’s,” a 2009 piece that established the group’s international reputation, depicts a copy of a McDonald’s restaurant slowly filling with water; its images of sodden fries and a Ronald McDonald statue bobbing in the rising water channel the era’s anxiety over globalization and climate change.

“It’s apocalyptic,” Nielsen explained in a recording made for the Louisiana Museum of Modern Art, outside Copenhagen. “But in a mild, Scandinavian way.”

More recent commissions for civic institutions in Copenhagen — like Superkilen, an inner-city park that the group designed in collaboration with residents and the architecture firm BIG, or the coming design of a subway station — have left the collective susceptible to charges of selling out. But Mr. Christiansen said that increased access to those with power, only sharpened Superflex’s critique.

“We like to engage with systems by going inside to challenge them,” he said. “When you’re inside, you can stir things up much more.”

And by emphasizing their engagement with capitalism from the outset, the group has, in a sense, inoculated itself. “Their work has absolutely been domesticated and appropriated by some of the institutions they question,” the Danish art critic Cecilie Hogsbro Ostergaard said. “But that doesn’t detract from its impact. The superficiality, the branding — that was part of their project from the start.”

In March, Superflex is set to move to a studio large enough to handle its expanding staff and growing number of commissions. Yet nearly as striking as its continued success is its longevity as a collective. Unspoken guidelines, like an understanding that once an idea is voiced it no longer belongs to any one person, diminish the risk of bruised egos. “There’s some loss of individuality,” Mr. Nielsen said. “But what you get back from the collective is bigger. You get the freedom of not having to be yourself.”

As Superflex has grown, its projects have become increasingly nuanced and ambitious. “Deep Sea Minding” began when TBA21-Academy, a foundation that unites artists and scientists around issues related to the oceans, commissioned Superflex to lead a scientific expedition to the South Pacific. There, the group conducted experiments to try to develop materials that could create a fish-friendly habitat.

For the desert installation, Superflex used one product of that research — an aluminum foam whose coloring and spongelike holes resemble coral — to build the drive-in, itself a reference to the car culture that contributes to global warming. Shot during the expedition, the footage on screen lets viewers, as Mr. Nielsen put it, “see what the fish see.”

As well as its rosy hues, which echo the color scheme of the nearby Sunnylands estate, and its engagement with local geology, “Dive In” is informed by its location. “This valley was once part of the Sea of Cortez,” Neville Wakefield, the artistic director of Desert X, said in a telephone interview. “Dive In” was about “time, about imagining what it will look like in 10,000 years, when it is again submerged,” he added. “There’s a visceral power to it.”

Contributing to that power, Mr. Wakefield said, is the wry humor that is a Superflex signature: “They use art to introduce people to serious issues without being didactic. It’s like Freud says: Some serious issues that are difficult to talk about can be addressed through humor.”

That humor punctuated a recent meeting in Copenhagen about the next phase of “Deep Sea Minding,” which entails building a research station in Jamaica from fish-friendly bricks and installing a graduate student to observe the interaction.

“We want the floor to be glass so that the clients can look back at the student, too,” Mr. Nielsen explained.

By “clients,” he meant the fish.