When Grace Jones was strutting around Studio 54 and Donna Summer records were playing at New York clubs, Empire Rollerdrome was hitting its stride in Brooklyn.

It was the end of the 1970s, disco fever was in full swing, and crowds of predominantly Black and gay Brooklynites had spent the decade dancing and skating at Empire. Unlike some of the elite discothèques in Manhattan, the rink was a welcoming space, with no velvet ropes or fickle doormen. Anyone with a few dollars could get in.

As it became a hot spot for nightlife, skaters and celebrities from different parts of the city traveled to Empire to experience its “miracle maple” floor, where the Detroit Stride met the Cincinnati Style and the Brooklyn Bounce. Cher threw parties there. Ben Vereen and John F. Kennedy Jr. glided across its rink.

At the center of it all was Bill Butler, a skater whose flair and prowess were enshrined in his many nicknames: Brother Bounce; Mr. Charisma; and, variously, the King, the Grandfather and the Godfather of Roller Disco. 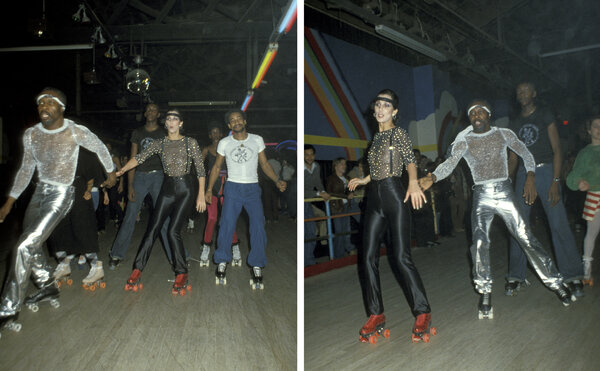 “He would do all these things that just looked impossible — spins and dips, and changing direction on a dime,” said Elin Schoen, who profiled him at the time for New York Magazine. “It was like watching a whirling dervish.”

Mr. Butler’s style of skating, jammin’ — which is built around rhythmic dips, spins, crisscrosses and turns — is now seen by fellow skaters as the beginnings of roller disco.

When he started going to Empire in the 1950s, Mr. Butler simply wanted to skate.

“I didn’t know anything about Empire,” Mr. Butler, now 87, said in a video interview from his home in Atlanta. “I didn’t know I was going to wreck the place.”

From the beginning, Mr. Butler pushed for new sounds. Traditionally, rinks hired live musicians to play rhythmic music on organs, often purchased secondhand from churches and theaters. Or they had D.J.s who spun music with predictable tempos that allowed skaters to match the beat.

It was in 1957, when he was a young man in the Air Force, that Mr. Butler first went to Empire. He arrived in his uniform with an LP of Jimmy Forrest and Count Basie’s “Night Train” tucked under his arm, and convinced the D.J. to play his record. As the swinging blues filled the air, Mr. Butler did his moves, spinning through the crowd and skating backward to the music.

By the mid-60s, he had sweet-talked Gloria McCarthy, the daughter of an owner at Empire, into changing the music. Fridays became “Bounce Night,” when popular music — jazz, R&B, funk and then disco — blared from the speakers.

In the early ’70s, Empire replaced its live organist with a D.J. And in 1980, the club sound designer Richard Long — who had created sound systems for places like Studio 54 and Paradise Garage — revamped the rink, newly renamed Empire Roller Disco, with a 20,000-watt stereo system.

This was Empire at its height. It “was like a Mecca,” said Robert Clayton, who worked there as DJ Big Bob for more than 20 years. “You didn’t skate unless you came to Empire.”

The skater many people came to see was Mr. Butler, whose flashy moves drew admirers and brought him students. Cher even hired him as her skating date for a night at Empire soon after the release of her roller disco-inspired song “Hell on Wheels.”

“If you were skating with him, you weren’t afraid of falling,” Ms. Schoen, the reporter, said in a phone interview.

“When you go to the ballet and you see these performers, you don’t think ‘their feet must be hurting,’” she added. “That’s the way Bill made skating look; he made it look easy, and I think it rose to an art form.”

Mr. Butler, who grew up in Detroit, learned to skate there in the 1940s, getting his start at Arcadia Roller Rink on Woodward Avenue. Black skaters were allowed at Arcadia just one night a week, and on those evenings, instead of a traditional organist, the rink would hire a D.J. to play soul and R&B.

“We used to call it roller rocking,” Mr. Butler told Rolling Stone in 1979. “All they’ve done is change the names around. Black people have been jammin’ on skates for as long as I can remember. But the terms aren’t important — it’s the skating. It’s the way of moving your body.”

At Arcadia, the 10-year-old Bill noticed how a skater named Archie moved his body, stunning the crowd by sliding backward with his hair slicked back and his boots unlaced.

“He was skating clockwise while the rest of us were skating counterclockwise, and that already got me crazy,” Mr. Butler said.

After that, Mr. Butler used the money he had earned delivering groceries to buy his own skates for the then-whopping sum of $23. But he wasn’t ready to skate, he said, until he could command the rink like Archie. So he practiced in his family’s basement, skidding into the hot water boiler and the coal bin as he attempted to perfect his stride.

No one knew that he was skating, he said; he was a loner — taking the bus to and from the rink by himself. Even after he enlisted in the Air Force and began traveling, he would slip away from the base by himself to check out the local rinks.

When he moved to Brooklyn in 1957, he brought with him his music and a hodgepodge of moves he’d picked up from skating all over. Soon, he said, he was spending most of his nights at Empire, where he began giving lessons to those interested in his style.

He called himself a jamma, a term he borrowed from both jazz and roller derby. (In roller derby it refers to the team member who tries to pull ahead of the pack and, ideally, lap the group.) Jammas, Mr. Butler said, build their movements by focusing on the skate’s leverage points. Rooting their movements in different parts of the inside or outside edge of the boot allows skaters to grip the floor properly and push off with intention and power.

“If you’ve got the technique, the improvisational part comes no sweat,” he said. “You have the sophistication to be an improvisationalist — a person who can skate syncopated rhythm.”

This is what he taught generations of skaters, and what he brought to the movies. He worked as skating director on films including “The Warriors” (1979), “Xanadu” (1980) and later “Roll Bounce” (2005), which helped inject the funky, dazzling world of skating into pop culture’s mainstream.

Mr. Butler also opened a skating school on Long Island, where he was living. By the late 1970s, he was recruiting new students and commuting to Brooklyn regularly to continue teaching at Empire.

One of his former students, Denise Speetzen, was 11 when she began training with Mr. Butler in the 1980s. As she grew older and met skaters from all over, she discovered a common thread.

“They’d say, ‘Oh, we always skated this way because this is the kind of music that we liked, so we have this different kind of sway or swagger,’” she said. “But if you talk to them longer and longer and trace back who taught each person it’s kind of like doing a family tree.”

“Eventually, you can trace it all back,” she continued, “and it’ll come back to Bill.”

Mr. Clayton, who traveled to rinks around the world as a guest D.J., also recognized Mr. Butler’s signatures. “All of that came out of Detroit,” Mr. Clayton said, referring to popular moves like skate trains and tension drops, “but he refined it and made it better.”

In 2003, Mr. Butler moved to Atlanta, where he has continued teaching at local rinks. After 77 years of perfecting his moves at rinks around the world, the pandemic has forced him to hang up his skates for now. He says he plans to skate and teach again once it’s safe.

And his ideas about skating haven’t changed.

“Space plus the beat equals what we do with our bodies and feet,” he said. “That’s where I’m coming from.”