On a cool October evening, in a Brooklyn studio crowded with canvases, some still wet, Diane Foley stood before an oil painting of two solemn grade-school boys in the Libyan civil war. One of the boys held aloft a photo of a middle-aged man, a relative, who was missing.

“I like this one,” Mrs. Foley said to the artist, Bradley McCallum. “I particularly like the ones that show the victims because it’s not just destroyed buildings. Jim wanted to inspire us to reflect on what really happens in a war.”

Mrs. Foley has a desperately keen understanding of what happens in a conflict zone. “Jim” was her son, the freelance photojournalist James W. Foley. He was kidnapped in 2012 while covering the Syrian civil war, held hostage for 21 months and brutally murdered in 2014 by members of the Islamic State in an execution filmed by his captors and released online. Many remember his death, but his mother and Mr. McCallum, who is painting a series based on Mr. Foley’s work, want people to remember his chronicle of war, its human cost and his humanity. 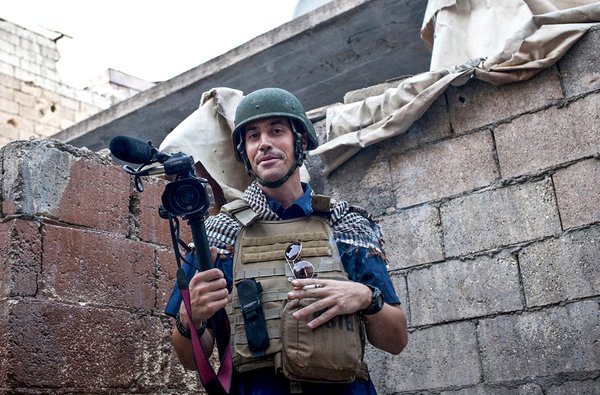 Three years ago, Mr. McCallum, 52, approached Mrs. Foley with an idea for a project that would play the role of a memorial, reframe the collective memory of Mr. Foley and make tangible the quality of empathy in his work. After teaching a graduate seminar at Columbia University that examined the way ISIS used visual imagery, including its violent online propaganda videos, to spread cyberterrorism, Mr. McCallum said, “The memory of seeing it when it was first on television, and the kind of trauma, and the sophistication in the way that video was framed, I wondered, would it be possible for me, in making art, to change the way we see Jim when we search his name?”

From the start, Mr. McCallum conceived of the project as a collaboration with Mrs. Foley. And after a year of conversations, she agreed to license her son’s work to him. Mr. McCallum was interested in unpublished source material, the workaday backdrop to the war. Mrs. Foley provided some of her son’s external hard drives she hadn’t opened, which he had left behind during his last visit home.

That archive contained some of Mr. Foley’s freelance work for GlobalPost and Agence France-Presse, including footage from the early stages of the Syrian civil war and the downfall of the dictator Muammar el-Qaddafi in Libya, where Mr. Foley was held for 44 days in his first kidnapping.

From them Mr. McCallum is close to completing 23 paintings and has prepared canvases for 10 more. The paintings include collages of images from Mr. Foley’s video or photographic stills, a process that Nicholas Mirzoeff, a professor of media, culture, and communication at New York University, described as “a physical manifestation of the photoshop process.” Photorealist in style, the paintings are oil on linen. Most also include a silk overlay, like a theatrical scrim, with text from Mr. Foley’s journal entries.

As he worked on the paintings, Mr. McCallum sometimes shared with Mrs. Foley the text he was printing. They discussed titles for the paintings and at times, struggled to walk the line between consultation and collaboration.

“I’d say to Diane, ‘Just trust me because if you try to make the selections, try to be curator of this image or that one, this isn’t going to work,’” Mr. McCallum said. But taking charge and speaking her mind come easily to Mrs. Foley, a flinty New Englander with a model’s frame who raised five children and worked as a nurse practitioner.

“It’s nice but I don’t think it really captures him,” she said as she stood in the studio before Mr. McCallum’s large-scale portrait of her son. She added: “I like the ones with the children. Jim loved children.”

With its reliance on photojournalism, Mr. McCallum’s project stands on the shoulders of artists like Andy Warhol, whose visceral Death and Disaster paintings appropriated newspaper headlines and images, like the 1962 Air France crash, one Warhol created the day after it appeared on the cover of the New York Daily Mirror, or his use of Charles Moore’s 1963 photographs for Life magazine of dogs tugging at civil rights protesters in Birmingham, Ala.

The Foley series is still underway, with the artist seeking a gallery or museum showing. But the collaborative process of memorializing a loved one with a non-artist is already precedent-setting. According to Dr. Mirzoeff, it encourages “persistent looking,” raising questions about the ethics of appropriating imagery, of war and conflict, memory and mourning, the refugee crisis, and the varieties of terrorism.

The paintings telegraph literal and figurative loss. In one, a soldier rests a gun on the sill of a broken window that overlooks a street gutted by explosions. “Mother’s Lament” captures six different video frames and features a woman in a double-layered veil and abaya, her face tight with anguish. In “Fallen” men snap pictures of the bloodied corpse of Mutassim el-Qaddafi, the son of the former Libyan strongman. The painting draws its images from 20 video stills stitched together from Mr. Foley’s raw video footage. Other paintings, of sky or desert, function as pauses between conflict photography.

“Bradley is not just giving us the most disturbing images — that’s certainly there — but also paying attention to what is the banality of war, its everydayness, little moments where you are just looking up, at a beautiful arrangement of light,” Dr. Mirzoeff said.

Since his graduate art student days at Yale, Mr. McCallum has spotlighted themes of justice and accountability in his work, including a stint as artist in residence for the New York Civil Liberties Union. His projects comprise collective portraits of women who lost children to gun violence, homeless teenagers and defendants in war-crimes trials at the International Criminal Court in The Hague.

Mr. McCallum received a $10,000 grant from the James W. Foley Legacy Foundation with an agreement to return some profits. The family established the foundation in 2014 to provide hostage advocacy services, education and journalist safety guides. During Mr. Foley’s captivity, his family said it experienced frustrating and fruitless attempts to work with the Obama administration and were instrumental in that administration establishing a new hostage recovery protocol involving families whose relatives were kidnapped abroad.

As the president of the Foley foundation, Mrs. Foley is practiced in being a public figure. Strangers send paintings and drawings of her son to the family’s New Hampshire home. The Foleys participated in Brian Oakes’s 2016 documentary, “Jim: The James Foley Story.” Sting wrote and recorded a song about Mr. Foley that was nominated for a 2017 Academy Award. Reporters phone the Foleys for reaction after a journalist is killed, most recently after the October murder of the Saudi Arabian journalist Jamal Khashoggi in Turkey. Earlier this year, when Mrs. Foley learned that a feature film was being made about a mother’s efforts to free her kidnapped son, a reporter in the Middle East, she asked whether it might harm conflict journalists.

In September, that film, Viper Club, written and directed by Maryam Keshavarz, debuted at the Toronto International Film Festival. Ms. Keshavarz said her characters are fictional and drawn from news reports of many kidnapped journalists. But after Mrs. Foley and her husband, John, a family physician, saw the movie, she contacted a producer, J.C. Chandor (the writer and director of “Margin Call” and “A Most Violent Year”), to share her concerns, foremost the film’s depiction of journalists ferrying ransom money. After meeting with Mrs. Foley and Nicole Tung, a conflict photojournalist and colleague of Mr. Foley, the scenes were changed and other things, “personal and too close,” Mr. Chandor said, were removed. “The last thing we wanted to do is cause her any more hardship and emotional turmoil.”

Ms. Keshavarz said she focused the narrative of the film around the “emotional anguish of a parent not having control, having to wait, and doing it alone,” while their child is a hostage.

The film is dedicated to conflict journalists, specifically Mr. Foley and four other reporters killed in the Middle East. Google made a small donation to the Foley Foundation. Produced by Google’s YouTube Premium, the film will be available via subscription next year.

“I think the film is much safer,” Mrs. Foley said of the subsequent changes.

She and Mr. McCallum have settled on “Inescapable Truths” as the title for his paintings.

“This is inescapable: that children are orphaned, people are widowed,” Mrs. Foley said. “It’s just horrific, the toll it takes because of people’s inability to get along.”

Family and friends describe Mr. Foley as warm and outgoing, with a fierce intelligence yet self-effacing and humble. Ms. Tung thinks he would have been “a little embarrassed” by the spotlight.

“For him, it was about the people he documented and whose stories were being amplified and not about him — on the other hand he would have been very honored,” she said by email from her current post, in the Central African Republic.

In the studio, Mrs. Foley and Mr. McCallum fanned through family photographs. There were also prints of the video stills Mr. Foley took in Libya and Syria, in his slivers of ordinary time, between the bombing victims and ruined cities. In one, a flock of dark birds appears in a corner of blue sky, their upturned wings flashing white. His mother studied the images, leaning in closely, and lingering on one that a colleague took of Mr. Foley, his lanky frame curled up with a notebook.

“I love this photo of Jim in the desert, trying to write in the desert,” she said, her fingertips touching the small cross on her necklace. She pointed out two other images, of the sun rising and setting. “It was very important when Jim was in captivity, the sound of the birds and of children playing, the sound of prayer, the call to prayer,” Mrs. Foley said. “Jim would pray with them.”

Mr. McCallum held up a photo of Jim as a teenager at a national park, on a family trip. In it, Mr. Foley is very near a sign that says “Danger. Keep Off Rocks.” His mother looked at it and shook her head.