The filmmaker attracted a cult following with his droll Vimeo shorts shot on the city’s streets. In “How To With John Wilson,” he expands the concept for HBO. 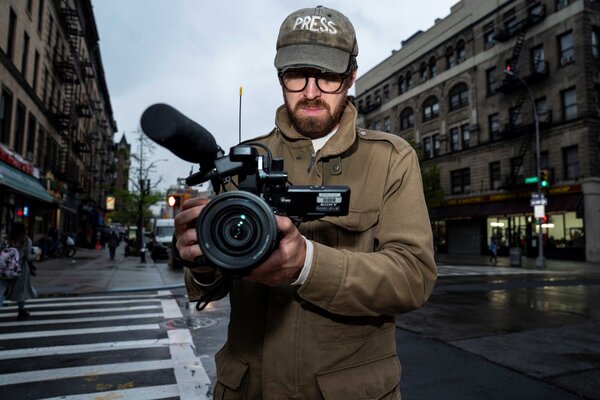 When John Wilson first began filming his debut series back in 2018, New Yorkers were able to talk to strangers and sit in restaurants without fear of impending death. We could banter with our bodega guys or older neighbors mask-free, which meant we could reasonably understand what our fellow citizens were muttering and feeling, or the four-lettered words they might be directing at us.

If you’ve forgotten what that version of New York is like, “How To With John Wilson,” which premieres Friday on HBO, might be the definitive survey of the now ancient traditions of the city — things like splitting the check and making small talk with total strangers. Filmed, narrated, written and edited mostly by Wilson, a lifelong New Yorker, the show might best be described as a darkly funny goof on the explainer videos that have saturated YouTube.

But that’s only the setup. Part urban travelogue, part first-person essay, the show is, at its core, an anthropological exploration of people — most often New Yorkers — in their native habitats. And as of now, it’s also kind of nostalgia-inducing, with plenty of footage of crowded grocery stores, busy restaurants and streets flooded with people trekking to the office, as they sidestep over dog droppings, spilled food and each other.

This isn’t to say Wilson is nostalgic for this New York, himself. 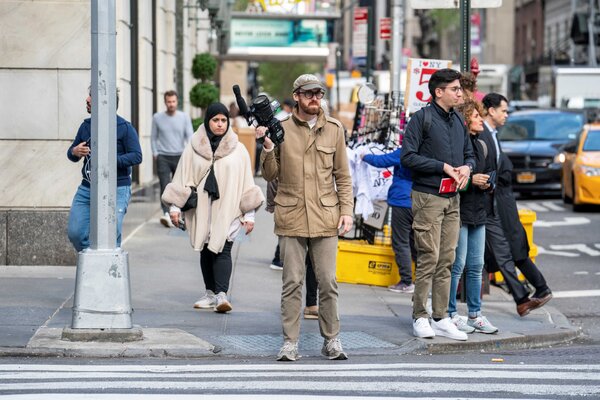 “I was afraid New York was going to become boring,” he confessed on a brisk afternoon earlier this month. The filmmaker, who turns 34 in November, was in the strange place of looking ahead to the debut of a show that will already be “aggressively dated” when it comes out. While he’s somewhat worried that viewers might not have appetites for this kind of time travel, Wilson considers himself a documentarian, first. He’s less worried about the past than on capturing the present of New York — the lead character that has been a constant in every film he’s made.

“New York City is the best character — it’s constantly renewing itself, constantly regenerating itself, losing itself,” Wilson said. “It makes me want to film as much of it as I can before it disappears.”

While “How To” is Wilson’s first TV series, it’s essentially an expansion of the offbeat “tutorial” videos he has been making on his own since 2010. Like his new show, these early shorts would purport to offer viewers insight into mundane tasks, inspired by the YouTube explainers that fascinated the filmmaker.

“I would watch them and want to know why this person became obsessed with air-conditioners,” Wilson said. “Was it a divorce, or something emotional?”

Wilson, who studied documentary filmmaking at Binghamton University, began trekking all over the city with his digital camera and iPhone, gathering hours of footage of random colorful New Yorkers and other objects of interest — misspelled signage, trash on the street. (The East Village is one of the most reliable sources of material, he said.) He would then reverse-engineer scripts based on the footage and insert personal “incidents” to push the story along.

“There is more raw material here than anywhere else in the world,” Wilson said.

Sitting in the backyard of his apartment in Ridgewood, Queens, wearing a flannel jacket and glasses with thick frames, Wilson has a soft-spoken presence. But his apparent passiveness masks a finely attenuated eye for the absurdity of life in the city. When our conversation is interrupted, at one point, by the distant sound of a neighbor’s violently phlegmatic cough, Wilson breaks into a mockingly repulsed “eww” and adds a deadpan side-eye. It was the day after President Trump announced that he had Covid-19, and Wilson explained that his morning had been spent filming newsstands across the city in search of New York Post headlines announcing the news.

Inspired by documentary filmmakers like Les Blank, Wilson practices an approach that he describes as “letting the story come to you.” For these early films, which he would upload to Vimeo with little self promotion, this process was intensive. He estimates that each of his 10-minute shorts required a year of gathering footage, in addition to writing and editing, all of this done in his free time while he worked a series of “low-rent” jobs, like editing surveillance footage for a private investigator.

Though the process has been streamlined significantly by an HBO budget, which allowed for a second shooting crew and additional writers, it took two years to shoot and edit the show’s six episodes, which clock in at around 25 minutes each.

“A lot of documentaries are about something that already happened, but I think people are kind of afraid to let the story find them,” he said. “It’s scary because you might not end up with something good.”

An example of “something good” comes in the show’s pilot, “How To Make Small Talk,” in which Wilson explores the ins and outs of polite chatter and his own difficulties with it. To reinforce a point about location, he went to a WrestleMania event in New Jersey and conducted interviews (which are unscripted throughout the show) with attendees, the first being with a self-styled “child predator hunter” shown chugging a beer while wearing a fur coat. The chance encounter led Wilson to go home with the man and film him as he attempted to entrap a predator, rerouting the direction of the episode.

“His process is definitely a Catch-22,” said Alice Gregory, one of the show’s three writers (as well as a contributing editor for The New York Times’s T Magazine). “Our scripts were really provisional documents — we would put an ideal scenario on paper but we knew it was going to change quite a lot.”

Wilson’s videos have a distinct style, fine-tuned during the process of producing over a dozen of these small films. He narrates each episode from a script that, juxtaposed with the footage, builds toward something like hard-earned personal revelations. Imagine David Attenborough having minor epiphanies in the style of Carrie Bradshaw.

It’s idiosyncratic stuff, with little to compare it to, though it shares a spirit with other droll vérité gems like “Nathan for You.” It’s not surprising then, that Nathan Fielder, that show’s mastermind, is an executive producer of “How To." After a mutual acquaintance passed along a link of one of Wilson’s early films to Fielder, the pair met for the first time in January 2018 at Forlini’s restaurant in Chinatown. That night Fielder agreed to develop a longer version of Wilson’s tutorials, having decided they deserved to be seen by a larger audience.

“As someone who doesn’t live full-time in New York, you start to understand the city through what you see on TV and in movies,” Fielder said in a phone interview from Los Angeles, where he lives. “His New York is the one no one bothers to show, or is too bland or too upsetting or dirty to show.”

Fielder, whom Wilson refers to as his “Fairy Godfather,” took to describing the show as “‘Planet Earth,’ but for New York” in pitches with networks, which led to HBO agreeing to financing a pilot episode. Here, the wildlife is substituted for confused people making their way through a complicated time.

“What we’re seeing in the show is people doing their best to grapple with the world they’ve been dropped into,” Fielder said. He described his own role as “trying to help out with whatever,” which included expanding Wilson’s premise into longer episodes and working with him in the editing room.

Fielder recalled one moment when Wilson filmed a woman as she delicately placed a wild pigeon into a plastic Duane Reade bag before walking off through Times Square.

“I think about that all the time,” he said. “What is the story with that pigeon, was he injured? Was he being rescued? John’s stuff is all moments like these — there’s so much to think about when I watch the show.”

In the second episode, titled “How To Put Up Scaffolding,” Wilson begins his narration by announcing: “Everyone in New York is going to die, but sometimes the city tries to stop that from happening,” before taking viewers on a history of scaffolding, documenting its status as a public nuisance and occasional killer.

“I spent an entire summer under scaffolding for that one,” Wilson said.

Framed as straightforward guides to achieving small goals (“How To Cook Risotto,” “How To Cover Your Furniture in Plastic”), the episodes stray into strange and personal places: a chance visit with one of Wilson’s ex-girlfriends; a Best Western conference room full of paranoiacs suffering from the “Mandela Effect”; a Long Island dinner for New York soccer referees. (Wilson wanted to see how those adjudicates of order handled splitting a check — the evening dissolves into a disgruntled revolt.)

Each episode follows its narrative arcs to often preposterous ends. It’s what Wilson calls the “elastic” quality of the tutorial, and the reason he was drawn to it in the first place.

“You can start with fixing an electrical outlet and end up at the edge of a volcano,” he said.

Or you can find yourself needing a how-to guide on finishing production during the early stages of a pandemic. In early March, as the crew finished filming the final episode, the first coronavirus cases began to pop up in the city, a somber fact that gets worked into the end of the season.

“We weren’t writing with the virus in mind,” Gregory said. “That it happened in the middle of the show is almost unbelievable. Everything that interested us about the city began to disappear. Well, not everything.”

Wilson, ever the documentarian, viewed the crisis as a mandate.

“One of my greatest fears is there not being a record of something important,” he said. “So, even though it’s been tragic, and it’s been relentless bad news, the city is also more interesting now.”

“We’re done shooting for the show,” he continued, “but I’ve been shooting nonstop all summer, trying to find everything, like those tents at restaurants, before it disappears.”

During the pandemic many people openly questioned whether living in New York was worth the hassle. If you need a rationale for forging ahead in this perpetually strange environment, Wilson’s show might be the ultimate explainer: How to appreciate life among quixotic city dwellers and their inexplicable rituals.