President Trump’s summit meeting in Vietnam with Kim Jong-un, the North Korean leader, disintegrated on Thursday after Kim insisted on a lifting of all economic sanctions against North Korea but would not agree to full nuclear disarmament.

Trump told reporters that rather than accepting a mediocre deal, “Sometimes you just have to walk.” Jimmy Kimmel seized on that comment, and made a quip alluding to Trump’s exemption from military service during the Vietnam War.

“You know, there was a time when Donald Trump wasn’t even able to walk in Vietnam because of his terrible bone spurs. But thank God those healed up.” — JIMMY KIMMEL

“He flew over there and got nothing — like the Fyre Festival.” — JIMMY KIMMEL

“Before he flew home, Trump told reporters that he could have signed a deal with North Korea, but he’d rather do it right than do it fast. Or as Stormy Daniels put it, ‘[sighs] That’s a first.’” — JIMMY FALLON

And Trevor Noah returned to a true oldie, joking about Trump’s command of the English language.

“When President Obama left office, he warned Donald Trump that Kim Jong-un’s nuclear threat would be his biggest challenge. Well, that, and learning to read. But mostly the nuclear challenge.” — TREVOR NOAH

On this week’s “Desus & Mero,” the hosts revisited Michael Cohen’s testimony on Wednesday before Congress. The two Bronx comics were taken by a moment when their hometown hero, Representative Alexandria Ocasio-Cortez, got Cohen to name the people who he said had knowledge that the president had provided “inflated assets to an insurance company.”

One of those people had an improbably Bronx-esque name: Michael Calamari.

“Michael Calamari sounds like a mad made-up Italian name. That’s something, you tell the cops that’s your name and they’re going to tighten the cuffs. [Impersonating a police officer] ‘All right, smartass.’” — DESUS NICE

“Lawmakers in North Carolina are considering a bill that would change the standard for a failing grade in public schools from anything less than 59 percent to anything lower than 39 percent. Said North Carolina students: ‘Whoa whoa whoa, 39 is less than 59?’” — SETH MEYERS

“Victoria’s Secret announced yesterday it will be closing more than 50 of its North American stores this year. ‘But where will I go when I want new ones?’ said Leonardo DiCaprio about his girlfriends.” — SETH MEYERS

“After years of investigations, Israel has decided to indict its leader for his crimes. And after hearing that, Americans are like, ‘Uh, can our Constitution convert to Judaism?’” — TREVOR NOAH

Don Cheadle appeared on “Desus & Mero” to discuss his new TV show, “Black Monday,” but what they really wanted to know was what it was like to play basketball with former President Barack Obama.

Can you guess whether John Mulaney’s neighbor was really a cannibal? As Pete Davidson points out, it’s hard to tell whether he’s lying, because his voice naturally sounds like a film-noir narrator recounting heinous crimes. 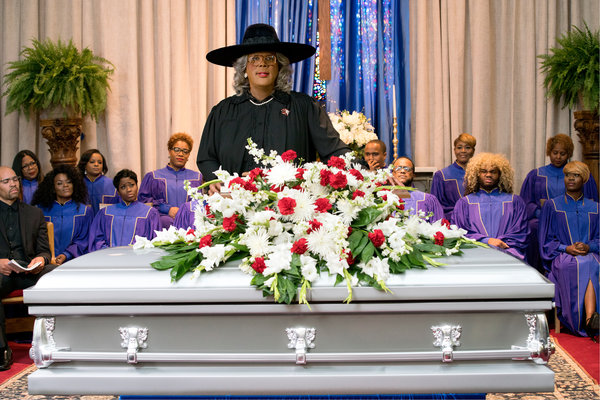 In a personal essay, Tyler Perry explains what his Madea character has meant to him over the past 20 years — and why he’s retiring her. Reflecting on the influence of his mother, Perry says, “I look back on a lot of my early writing and I feel that I was subconsciously talking to my mother.”