Jimmy Fallon on Monday previewed the turkey-pardoning ceremony set to take place Tuesday afternoon at the White House. He informed viewers that they could vote on which turkey ought to be spared, then threw some jabs at President Trump — and at Florida, where two big midterm elections were recently called after over a week of recounts and disputes.

“Americans actually get to vote on which turkey Trump pardons, and I saw that the two finalists are named Peas and Carrots. When he heard they’re both named after vegetables, Trump was like, ‘Forget it. They’re both goners. Where’s McMuffin and Milkshake?’” — JIMMY FALLON

“That’s right, Americans can vote on which turkey gets pardoned. You could tell the turkeys want to drag it out as long as possible, because today they asked if that vote could happen in Florida.” — JIMMY FALLON

Before the guests arrived, Kimmel told a few jokes introducing the evening’s theme.

“It will be a big night, and I think you’ll agree: It’s refreshing to see so many stars joining forces to try to put a stop to something other than our president.” — JIMMY KIMMEL

“Bill Gates has two goals in life: One is to eradicate AIDS, and two, to bring back khakis with the pleats in front. And tonight we are going to help him reach at least one of those goals.” — JIMMY KIMMEL

“In an interview with Fox News, Trump said that he’s planning his first visit to a war zone. Troops were glad to hear that, until they realized he was talking about Walmart on Black Friday.” — JIMMY FALLON

“During his visit to California on Friday to survey the damage caused by wildfires, President Trump said, quote, ‘Nobody would have ever thought this could happen.’ Really? Because it literally happens every year. Do you have the same reaction when a ‘Fast and Furious’ sequel comes out? ‘No one saw this coming!’” — SETH MEYERS

The celebrities on “Jimmy Kimmel Live” lined up to sing “We’re Going to Hell,” a tune that’s become a (RED) benefit show tradition.

Former Secretary of State John Kerry will sit down with Seth Meyers on Tuesday. 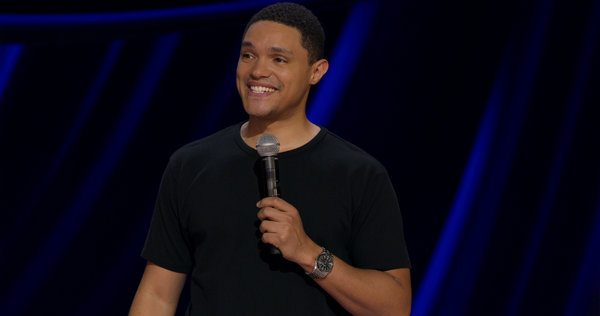 Trevor Noah is on break this week for Thanksgiving, but his new Netflix special “Son of Patricia” is available to stream. Here’s a rundown on that show, as well as a handful of other highlights on TV and the web on Tuesday.

Plus, More Ideas for What to Watch Tonight: