LOS ANGELES — In a soundstage on a quiet street in Glendale, Calif., a whisper passed among the crew. Svetlana, the director’s mother, had arrived.

It was April 2018, and the photographer Diana Markosian, then 28, was directing her first short film — the centerpiece of her autofictional project titled “Santa Barbara.” She had invited me to witness the beginning of this ambitious and multidimensional work, named both for the campy television soap opera of the ’80s and ’90s, and the town where she spent much of her childhood.

Over the next two years, I followed “Santa Barbara” as it grew to include a series of photographs, a book that will be released by Aperture in November, and an exhibition of images, videos and installations that will debut in February at the San Francisco Museum of Modern Art. Shooting took Ms. Markosian and her crew to locations across California, from Santa Barbara to Palm Springs and the Mojave Desert, and eventually to Yerevan, Armenia.

“Santa Barbara” is based on Ms. Markosian’s dramatic reconstruction of her exodus from post-Soviet Russia with her mother, Svetlana, and older brother, David, when she was 7. The three settled in Santa Barbara with a man named Eli, whom Ms. Markosian came to call “Dad.” She did not see her biological father again for 15 years.

Only when Ms. Markosian was 27 did her mother reveal to her the full story of how she and Eli met. She had enrolled with an agency in Russia that posted listings in American newspapers and catalogs for so-called mail-order brides. 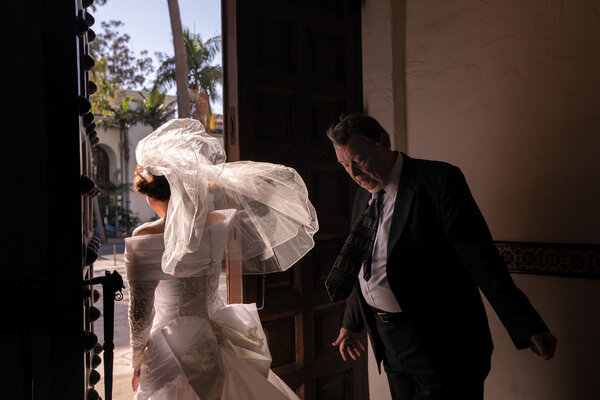 “Santa Barbara” is Ms. Markosian’s attempt to come to terms with the decision taken by Svetlana a quarter of a century ago to abandon her husband and Russia. It was a decision, Ms. Markosian now says, that “truly changed our lives, but also ruptured something very big in all of us.”

Her relationship with her mother has yet to fully heal, she told me over FaceTime in August. “I tried to make the film from my mom’s perspective, because I wanted to understand her. I wanted to love her. I wanted to feel for her more than I guess I have in 30 years.”

After the collapse of the Soviet Union, Ms. Markosian’s biological father, Arsen, an engineer with a Ph.D., had been reduced to selling counterfeit Barbie doll dresses on the black market and painting matryoshka dolls for tourists in Red Square. Svetlana, an economist who had just defended her Ph.D. dissertation, waited in bread lines and scoured the streets for bottles to sell. In the evenings, along with millions of other Russians, she watched “Santa Barbara,” the first American soap broadcast on Russian state television.

Under the weight of their struggles, Ms. Markosian’s parents’ marriage disintegrated. Arsen began seeing another woman. One night in 1996, Svetlana woke her children and told them they were going on a trip. They did not ask questions. After a long flight, they blearily disembarked in Los Angeles, where a chubby older man in a windbreaker was waiting for them, clutching a bunch of flowers.

Viewed from one angle, “Santa Barbara” is a daughter’s study of her mother’s disappointments: in her own, proud country; in her husband; in her career; in freedom; in America — which she had long fantasized about; and in Eli, who was a handsome, middle-aged man in the photograph he had mailed her.

Ms. Markosian, who studied journalism at Columbia University, found early on that she had much more of an affinity for storytelling with images than with words. On the day she graduated, she celebrated by buying a one-way plane ticket to Moscow.

“I asked myself, ‘Where do I go to learn how to use a camera?’ For me, that was where I came from,” she recalled. “I started to piece together not just my childhood but all my culture really — trying to create this foundation that was broken for me as a kid.” She joined a news agency in Moscow, then moved to Chechnya, where she picked up assignments from publications including Time magazine.

In 2011, she flew to Yerevan to meet her estranged father. (Ms. Markosian’s parents are both Armenian, and the family kept an apartment there.) She created a touching series of photographs, “Inventing My Father,” which revealed both her desire to connect with him and the distance between them. Another series, “Mornings (With You),” made three years later, featured photographs shot from a tripod-mounted camera, operated remotely by Arsen, of the pair eating breakfast.

In each project, as with other series by Ms. Markosian, photographs taken by the artist are interspersed with found images: old family snaps, formal portraits, home video stills, or her photographs of letters, newspaper clippings or other archival material. Often, her artfully honed extended captions accompany the pictures too.

Ms. Markosian’s work has none of the “fly-on-the-wall” detachment of traditional documentary photography or news reporting. She is vividly present in her work, and often sets up situations in order to get the precise shot she wants. “I don’t know at what point I stopped believing in objectivity,” she says.

In 2017, while planning “Santa Barbara,” Ms. Markosian commissioned one of the original writers from the 1984 soap opera, Lynda Myles, to write a screenplay of her story. “It helped me process my family history and see it as a story,” she says. “It was still my life, but I could now step back and, in my own way, control it.” That dialogue never made it into the final cut of the film, but it appears as typed manuscript in Ms. Markosian’s Aperture book, lending narrative direction to photographs of details like a red plastic telephone beside a full ashtray, or a cactus caught in the evening sun. These appear in the book alongside staged photographs: actors dressed as Ms. Markosian’s family members, on set or on location, directed by the photographer or improvising in character.

On the Glendale soundstage. one person especially apprehensive about Svetlana’s arrival was Ana Imnadze, the actress from the Georgian republic cast to play her. Ms. Imnadze, who had quickly grown close with Ms. Markosian during her first visit to the United States, found herself in the center of the unfolding family melodrama. “In this moment, I’m not only an actress,” she told me. “This story’s inside me.”

Later that day, they would shoot a scene in which Ms. Imnadze, dressed as Svetlana, asked the real Svetlana questions she had written in advance. It is one of several moments in the project when the fourth wall is removed, and “Santa Barbara” is revealed as a fastidious reconstruction.

In a set of the Markosians’ Moscow apartment, the two women faced each other across a table set for tea. “Svetlana, why did you leave Russia?” Ms. Imnadze asked.

Eli was kind and patient. In Ms. Markosian’s film, we see him teaching Svetlana English, sitting beside her in bed. “Confident. I am confident,” she repeats. We see shaky home video footage of their wedding day, restaged and shot by Ms. Markosian on her mother’s old camcorder.

“Did you love him?” Ms. Imnadze asks Svetlana. “I think I learned to love him, later on,” she replies. “I was too traumatized when I came, from everything what happened. I didn’t see a difference between thankfulness and love.”

The marriage, however, was never grounded in reality. One night, when the family was about to relocate from Santa Barbara to San Francisco, Eli dropped Svetlana and the children at a motel, and never returned. “Lana, I can’t do this anymore,” he tells her over the phone in the film. The relationship, Ms. Markosian notes dryly, lasted nine years — the same as “Santa Barbara,” the television series.

Svetlana eventually moved to Portland, Ore., where she lives today. She started an accountancy firm.

In 2016, Ms. Markosian was invited to join the revered photo agency Magnum. For many photographers, there is no higher distinction, but Ms. Markosian found the agency restrictive.

When she was asked to submit an application to advance her membership, she offered her work-in-progress for “Santa Barbara,” they asked her to apply with a different work. Even though it stretched the definitions of documentary photography, this was the most authentic project of her career, she says now.

“It felt like I was dating somebody that I had to constantly prove myself to,” she says. “And at a certain point I just didn’t have anything to prove — I knew that the work was true to me.” She resigned from the agency.

“Santa Barbara” is less a dramatization than a re-enactment. Ms. Markosian worked with her family to ensure that details of the sets and costumes were exactly right; she even traveled to Yerevan to shoot scenes in the family’s home there, when her mother observed that the Glendale set of their apartment was too roomy. Armen Margaryan, the actor who plays Arsen, wore her father’s watch, his glasses and his sweater. Ms. Markosian auditioned more than 200 actresses in Los Angeles, then Moscow and Armenia, before she met Ms. Imnadze, whom she immediately realized was perfect for the part. (“When I saw her,” Svetlana later admitted, “I felt bad for her because I saw myself, and I knew how miserable she was.”)

With Gene Jones, the actor who plays Eli, Ms. Markosian built such a close rapport that, on set, she called him “Dad” and he called her “kid.” The entire experience of making the film was a form of therapy, she says, allowing her to confront unaddressed aspects of her past. “I forgot how much I loved Eli,” she explained this summer. “Maybe more than my own father even. With this project I had a chance to spend a little more time with him and to thank him for what he did for me because he changed my life.”

Toward the end of the film, we hear Ms. Markosian speaking on the phone to her mother. “You feel like our story is like a soap opera, Mom?” After a deep breath, Svetlana responds, “It’s life.”

For all its dramatic flourishes and occasional sense of unreality, no one’s life is a soap opera. For one thing, people in soap operas never watch soap operas — nor do they try, miserably, to make their lives match the narrative clarity of the story lines they see there. In “Santa Barbara,” Ms. Markosian follows the fallout from that impulse — in the process, making reality a little more like a soap opera in order to see it more clearly.