An Indonesian art collective was announced on Friday as the artistic director of the fifteenth edition of Documenta, the trendsetting art exhibition held every five years in the industrial town of Kassel, Germany.

The group, called ruangrupa — its name is spelt with a lowercase ‘r’ and loosely translates as “a space for art” — will be the first Asian curators of the event, one of the art world’s most high-profile exhibitions. Featuring 10 core members, ruangrupa are also the first artists, rather than full-time curators, to have been chosen to organize the exhibition. The 15th edition will run from June 2022 through September of that year.

The collective is known for working with community groups and intends to bring that approach to the exhibition, Farid Rakun and Ade Darmawan, two of ruangrupa’s members, said in a news release. They will focus “on today’s injuries, especially ones rooted in colonialism, capitalism, or patriarchal structures,” they added. They also want to show works or present events “that enable people to have a different view of the world,” they said.

Founded in 1955, Documenta describes itself as a “museum of 100 days” and transforms working-class Kassel into a global arts hub. It often highlights pressing social issues, and gives both art world stars and lesser-known artists a global platform.

The last time a collective organized the exhibition, at the fourth edition in 1968, the event was heavily criticized. Since then it has always been run by one or two people. 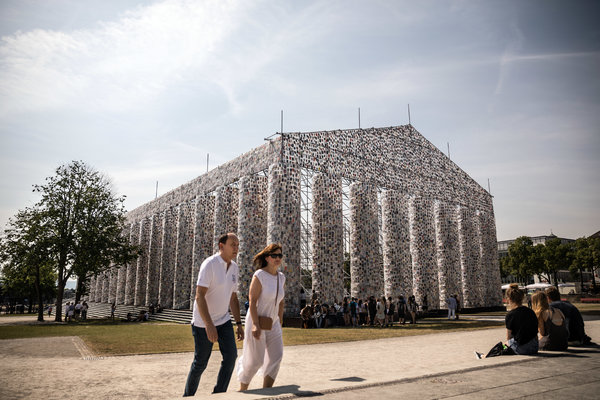 Documenta 14, the last edition, in 2017, was directed by the Polish curator Adam Szymczyk, and was seen by over a million people. It was the first edition to be split across two locations, with 160 artists shown in both Kassel and Athens. It focused on issues like resurgent nationalism, racism and economic inequality and received a mixed reception from art critics.

Holland Cotter, writing in The New York Times, called it a “scattered, uneven, relentlessly unspectacular show.” But, he added: “In the end, it’s as good as the time and attention you’re willing to give it.”

But the decision to expand the festival to a second city caused problems. Documenta 14 ran $8 million over budget and the governments of Kassel and the German state of Hesse, where Kassel is, had to step in to stop the company that runs the exhibition from going bankrupt.

There has been no discussion about having a second venue in 2022, said Elvira Dyangani Ose, director of The Showroom Gallery in London and a member of the committee that chose ruangrupa, in a telephone interview. The collective’s approach was “rooted in collaborators around the world, and they want to keep that very much at the core of the program,” she said. “What that means in practice, we don’t know yet,” she added.

Founded in 2000 in Jakarta, Indonesia, ruangrupa runs an art space there that is a well-known party spot and also curates exhibitions around the world. The group ran an internet radio station as part of Documenta 14, and has done such projects in Indonesia too.

In 2016, it curated the Sonsbeek art exhibition in Arnhem, the Netherlands. In preparation for the event, it set up a workshop in the city to meet locals and give them input into what should feature. Installations in the final exhibition included a wooden structure by the artist Alphons der Avest, in which local bakers made everything from Turkish bread to pizza. The bakers used materials from the building itself to fuel the oven, so that the structure eventually consumed itself.

“Documenta is consciously giving room to the non-European view,” said Angela Dorn, the government minister responsible for the arts in Hesse. She added: “ruangrupa uses art in its home country to address public issues and problems. I’m looking forward to seeing how they incorporate this idea in Documenta.”