Martine Edjuku was born into a country in conflict.

The Democratic Republic of Congo had been in political crisis for decades, something that came into sharp focus for her once Ms. Edjuku reached high school. As the conflict intensified, teachers were not paid and schools closed.

Ms. Edjuku and fellow students took up a collection to cover the transportation costs and a small salary just to get teachers to school, and classes were able to resume.

“We tried to fight the system,” Ms. Edjuku said.

Her leadership came at a personal cost when she went to college.

At a church gathering, the local police forced her and a group of students to take off matching T-shirts that supported Catherine Nzuzi wa Mbombo, the leader of Ms. Edjuku’s political party and a vice-presidential candidate.

“They started beating us, they ripped off our shirts,” Ms. Edjuku said. When the police asked who the group’s leader was, one student pointed to Ms. Edjuku.

“I experienced many things I don’t want to go over again,” she recalled in her Harlem apartment last month. “It was not easy. That led me to be here.”

Ms. Edjuku first came to New York in 2005 as a delegate to the United Nations Commission on Sustainable Development. 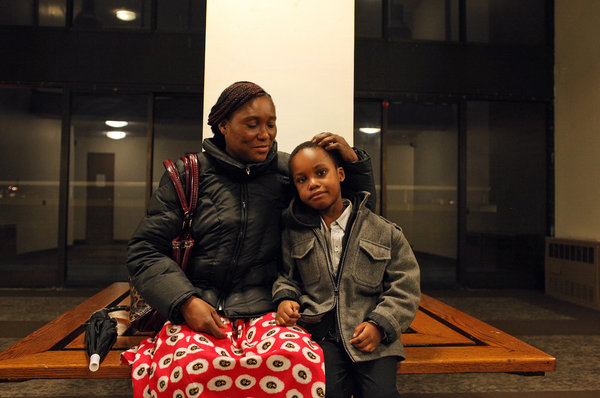 But when it was time to return home to the Democratic Republic of Congo, she was advised by family members and colleagues back home not to return for her safety. Elections were coming, and the political crisis was too severe.

Ms. Edjuku chose to claim asylum and stay in the United States. Her request was approved a year later, and in 2013, she became an American citizen.

She had left behind a country in turmoil and avoided threats to her own life. But she had also left a large, close family with some 60 cousins. “We don’t call each other cousins, we call each other brother and sister,” she said. “In the bottom of my heart, I know that we love each other.”

In her homeland, Ms. Edjuku studied French linguistics in college. But once again, conflict interfered with her education; it took her 10 years to earn her degree instead of five, she said.

A university professor of Ms. Edjuku’s recruited her into a political faction that supported better education policies and rejuvenating cities.

Her activism grew during her studies, and she eventually joined the staff of the Ministry of Solidarity and Humanitarian Affairs while she was still in school. Ms. Edjuku registered nongovernmental organizations trying to help ease the humanitarian crisis in the eastern part of the country.

“I love to help people, I love to be in a group of people and get them what they want,” she said. “I really love to do that.”

After seeking asylum in the United States, Ms. Edjuku spent her first year living with relatives in New Jersey while undergoing counseling at Bellevue Hospital’s program for survivors of torture.

Starting over was not easy, and she has struggled in the years since.

She did not know the language and missed her family, she said. But as she began taking English classes, a new life began to emerge.

Bellevue introduced her to a lawyer at the Davis Polk law firm who helped process her asylum request. She bounced from room to room, apartment to apartment, working odd jobs, from restaurants to the mailroom at Goldman Sachs, to survive. She also enrolled at City College of New York as a full-time student to study international affairs.

In 2010, her grandmother, Therese Mboke, also won political asylum in the United States.

In debt, out of work, and now with a newborn son and her grandmother to look after, Ms. Edjuku found herself in a homeless shelter for a year. The family moved into their current apartment in 2014.

Anthony loved learning how to swim and came home with songs to teach his mother. Ms. Edjuku loves to sing and is a member of two church choirs in New York. The pair sang a camp song together on a recent afternoon.

Aside from working as a restaurant server, Ms. Edjuku is a part-time caretaker for her grandmother and picks up freelance translation projects when she can. She receives $240 a month in Supplemental Nutrition Assistance Program; her grandmother receives $182 in monthly Public Assistance benefits and $192 monthly from SNAP.

This fall, Ms. Edjuku returned to her country for the first time in 18 years, to attend her mother’s funeral. She left disheartened.

“We don’t have the freedom of speech — people who try to talk, they always get in trouble,” she said. “The country is very destroyed. Between all of the politicians, I don’t know who is good. I don’t know. We don’t have choice. It’s very difficult and very, very complicated.”

She would like to work for a nonprofit organization someday, helping to build relations between her native and adopted homes.

“I’m an American citizen, but originally from Congo. How can I be a bridge between these two countries,” Ms. Edjuku said. “What can America benefit from there, and what can Congo benefit from here?”

Someday, she hopes to return for good. She owns a parcel of land outside the capital of Kinshasa. She would like to build a school on it.

“I don’t want to keep everything for myself,” she said, “but rather, how can I serve others?”